I have so much to tell today, but unfortunately I don't have a lot of photos to show for it.  On my free day, I started by shopping for some essentials, one of which was a new SD card for my camera.   Then, I inserted it in the camera and hit the road.  I had no particular destination in mind, but I haven't driven west out of Tulsa on Route 66 recently, so I pointed the Subaru in that direction.   I made it all the way to Stroud, snapping photos along the way -- not any of the usual much-photographed sites, but just scenes that happened to tweak my imagination at the moment.  The only "iconic" site that drew my attention was the Shoe Tree, because I was so pleased to see the huge increase in orphan footwear which has been tossed into its branches since my last visit.  I got some good photos there.

Upon arriving home and inserting the SD card into my computer, I became glumly aware that it was apparently damaged, because although there are photos on the card, they refused to translate to my hard drive, thus I can't post them here until I figure out if they're salvagable.

Then, last night, my friend Susan Yates and I attended a Route 66 dinner at Lucky's, an upscale restaurant in Tulsa.  Sponsored by the restaurant and the Melville Winery in Lompoc, CA, it was advertised as presenting a very interesting and somewhat complicated 6-course menu based on various Route 66 foods.  Also, Michael Wallis was listed as the "guest of honor".  Upon arrival, Susan and I were surprised to see such a large number of participants, mostly young folks, considering the very high cost of the evening.  In fact, Michael and Suzanne Wallis, Susan, and I were the only folks there who were representing the "old guard" of roadies in Tulsa.

Each course was loosely based on a dish from a town on Route 66.  Loosely.  VERY loosely!  Every course was remarkably delicious and accompanied by some very fine wines.  All evening, my thought was that, although none of the regulars were there, it was a great way to introduce the young couples in attendance to the wonders of the Mother Road. 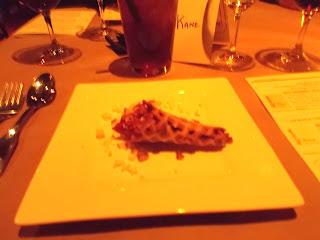 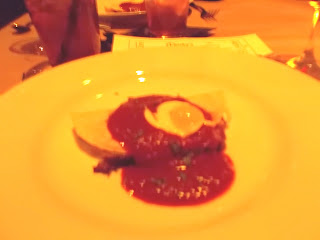 Lompoc, CA (not on Route 66, but the home of the vineyard) Salad of Local Greens, Shaved Local Goat Cheese, Pistachios.

Because it was just plain not my day for photography, my flash chose not to flash until the last photo I took.  So, what you see is what  you get.    Here is the placemat we each received, which also served as a menu.  The wines served with each course were outstanding! 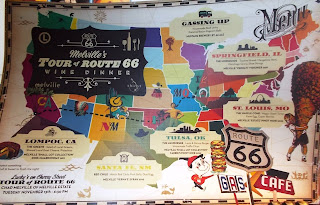 Here's Susan, bathed in the non-light of the very dark restaurant 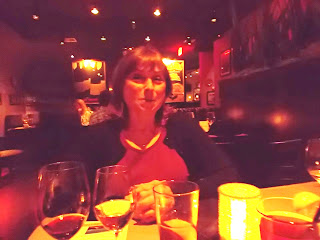 And I must show this because the flash finally decided to behave.  It's the young couple who shared a table with us.  Nice people, and I hope Susan and I were persuasive enough to see them on Route 66 next spring. 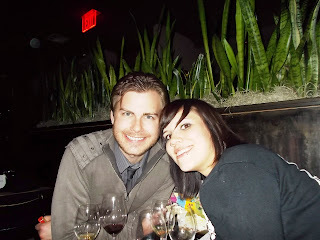 When I get my other photos online, I'll post them.  Until then, use your imagination, please.

Sounds like a fun and delicious dinner! I love it that there is a whole new generation that honors and loves Route 66.

That last picture turned out well...