Well, although we were short on visitors on my first day back to Afton Station since last Saturday, we weren't short on interesting happenings.  "We" refers to those "regulars" who stopped by today -- Ron M., Betty, Tattoo, Robin, Phil, and Michael Scruggs.

Betty brought her little Corgi puppy, Bella, for a visit.  Bella managed to entertain us for several hours.  She's got the usual puppy energy, but once she got used to all of us she calmed down and was a perfect little lady. 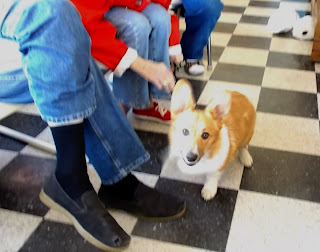 As you can see from the above photo, I'm still experiencing problems with my camera.  In fact, the male half of this nice couple (below) from Wichita, KS who came to visit today made a valiant attempt to fix the settings for me, but like those who have tried before him, he was not successful.  Cindy and Jim were doing a little Oklahoma Route 66 exploration over the holiday weekend, and Cindy is going to send me photos of some Packards once driven early in the 20th century by her grandfather.  I can't wait to see them! 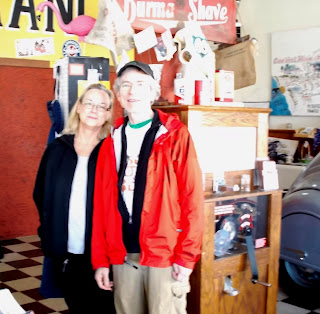 Our only other real travelers were two guys (father and son) from Oklahoma City, OK.  They, too, had a great interest in Packards.  They said they'd be back.

Toward the end of the day, we had a delightful (and delicious) surprise.  Sandy Reynolds, who is working on getting the new barbecue place open just down the road, walked in with a full plate of samples from their very first day of firing up the barbecue.  They won't be open for about a month, but today they were hosting some of their friends during the OSU/OU football game and testing out the deliciousness of the barbecue and side dishes.  She was kind enough to come down and let me have a taste, too.  Well..... if I get a vote, it's an enthusiastic thumbs up!!  The pulled pork was incredibly tender, the brisket flavorful, and the potato salad and sides just the way I like them.  Oh dear, I'm not sure it's a good thing to have this bastion of yumminess right down the road.  Although it will be fantastic for our visitors to have a good eatery in Afton, it could be my downfall.  Yikes!   Stay tuned for my announcement of a grand opening of this barbecue and beer place. 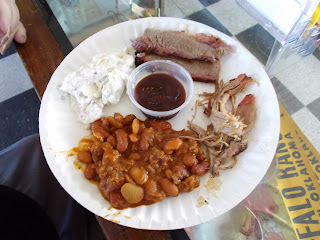 Tattoo got a new tattoo and asked me to put a photo of it  here.  It's the Palm Grill in Atlanta, IL, just across the street from the Muffler Man giant eating a hot dog on Route 66 in the center of town. 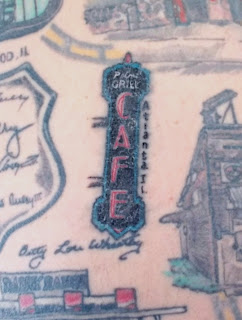 Unlike today, yesterday was a busy one at Afton Station.  Robin and Phil were holding down the fort, and they met and greeted 18 visitors from afar, including three separate groups from Colorado and a young honeymoon couple from England.  Wish I'd been there.   I will be there again tomorrow, though, and I'm hoping to catch some of the folks passing through Afton on their way home from Thanksgiving visits.  See you then!