A Trip to Commerce

With no visitors until about noon, Ron M. and I were starting to wonder if we had done something to offend the world. The famine was broken when these 4 Swiss citizens (from a town named Domdidier) stopped in. With the help of the one in the group who spoke English about as well as I speak French (not very!), I managed to find out that they're heading to Las Vegas, doing Route 66 the whole way but skipping most of California. 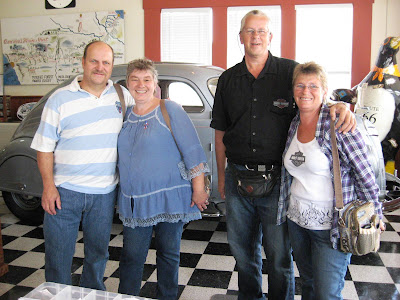 Next came a couple from Henderson, Tennessee. We first noticed the desert water bag on the front of their car. Upon chatting with them, we found out that they've been on the road for 6 1/2 weeks and are heading home. He's had the water bag since the '60s and they actually used in in the desert on this trip! 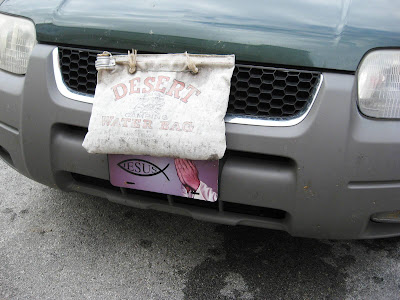 After greeting a few more guests -- from Moore, Vinita, and Broken Arrow, OK -- we decided to close up early and do some investigation. It seems that a visitor yesterday informed us that Mickey Mantle's boyhood home in Commerce (about 20 miles from Afton) had been moved and was sitting on blocks near the center of the town. He even showed us pictures of the house in its new location. We were a little dumbfounded because we hadn't heard a thing about this major development. So. . . off we went to Commerce to see what we could find out.

We found the house on blocks right where the visitor had told us it was. It didn't look quite right, so we proceeded to the place where Mickey's house has always stood. It's still there! I'm not sure how the gentleman's signals got crossed, but he said a person in Commerce gave him the information. I'm so glad we checked. 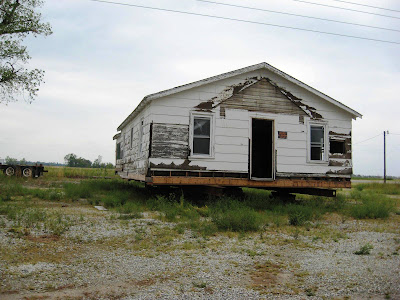 . . .and here's Mickey's house at 319 S. Quincy St. It could use a little uplift, but at least it still sits where it belongs. . . for now, at least. If anyone has heard anything about this, please let us know. 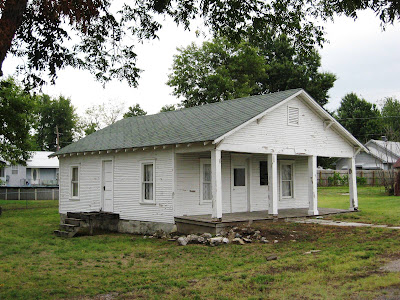 For quite some time, I've wondered who are the folks who are regular (daily or almost daily) readers of this blog. No special reason, just curiosity. So, if you'd drop me an email (LaurelRK66@aol.com) or put a comment right here on the blog telling me who you are and why you're interested in our daily hijinx at the Station, I'd sure appreciate it!

I hope someone knows about Mickey Mantle house. Is it empty?

I read you blog daily.

I check your blog on Tuesdays, Thursdays, Saturdays, and Sundays and read every entry, though I don't always leave a comment. I enjoy reading about people who appreciate and travel Route 66. And I'm fascinated by how you've made--and continue to make--your dream come true.

I have been reading your blog for sometime. I found you when we were searching information about Route 66.
Last year we rode all of the route we could find and ended up at your place but you weren't open for the day. Drat. :)
You have a great place,
Susie in northern NY

I found your blog through a link on Ron McCoy's Antique & Collecting newsletter. I live in Saudi Arabia, and there's not much to do so I check my favorite blogs daily. My father went to school briefly in Afton, and my parents live in the very NE corner of Oklahoma now. I want to visit your museum next summer when I visit them.

My son and I are big Route 66 fans. We try to drive parts of the old road whenever we can. My mother used to live in Bella Vista, Ark. so we often would travel from here in Broken Arrow to see her, and it got boring always taking the turnpike so we got in the habit of exploring back roads on the way. Couple times we stopped at your place but it was in the evening and we missed you. So I decided to try and find you on the web and make a note of when you were open. That's when I discovered your blog and started reading it. I think it was about a year ago we finally made it to see you during the day and you put our picture on the blog that day (Bill and Chandler). We bought one of those nifty guide books from you and with that, the internet and my GPS, I've been able to find and drive sections of the old route from St Louis to Santa Monica. I just love what you're doing with Afton Station and I'm glad to see someone interested in keeping America's automotive heritage alive. Thank you.

Yes, Miss Dazey, it's been empty for a long time, and seems to be deteriorating. It used to be freshly painted, furnished, and maintained. The plaque is still on the front, but the rest isn't looking so good.

I read your blog most every day and look forward to the information that you share with us. I'm proud of our 10+ year friendship. I wish I could get by to see you more often. Personal visits are much more fun than reading a blog.

I'm so glad to know you're one of my readers, Mike! I, too, have enjoyed our long friendship. Hurry up and come visit!