I drove into the beautiful sunrise on my way to Afton today. So many sunrises are breathtaking in this land of big skies. I never fail to be moved by them. 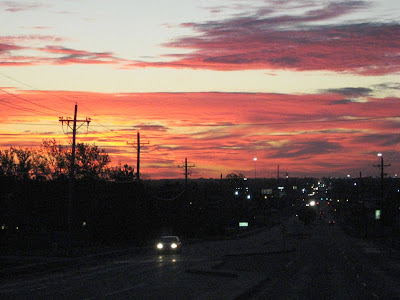 To most people, this will look like a boring photo of scraped earth. To others (such as me) it is nothing short of wonderful. This is the site of the upcoming installation of the Sidewalk Highway monument that we've been awaiting for close to two years. It's been held up by red tape, but today the guys from Ottawa County started to prepare the land, and Marly has driven across the state (350 miles) to pick up the monument and drive it back to Afton tomorrow. Ottawa Co. says we should have it planted in the ground in less than a week! The entire site won't be done by then however, since the OK Dept. of Transportation is responsible for some elements, and they're notoriously slow. But we should soon be ready to have a big celebration and I, for one, can't wait! 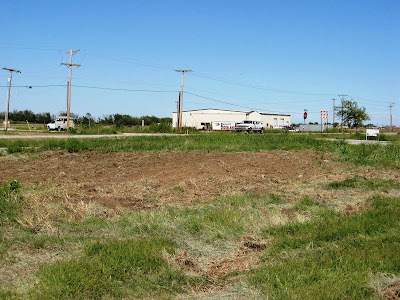 When I left Afton Station this afternoon, Phil was still there with a room full of visitors. He called me about an hour later, when I was about half way home, and said he still had people coming in the door. He's awfully nice to hang in there when I have to leave to drive back to Tulsa.

While I was there, we had 22 visitors. A good number of them were Europeans, from Wellington UK, Glasgow Scotland, Mnetenp Netherlands, Weisbaden Germany, and Barcelona Spain. Here's a couple from the U.K. who arrived as early this morning as I did! I certainly enjoyed their early morning enthusiasm and conversation! 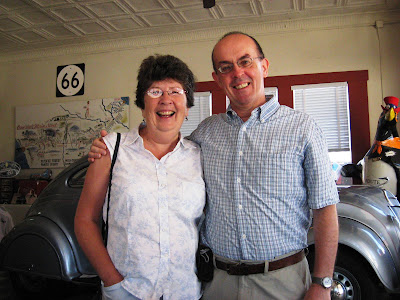 Afton "old timer", 86-year-old Melvin Berks, stops in every now and then and always has some great stories to tell. Today's offering was actually rather shocking. I knew that Afton Station once served as a bus station for the town, but I didn't know that one of it's functions was the place where young pregnant girls from all over the state would come in order to pay visits to a well-known abortion doctor who lived nearby. The girls (often as many as 5 a day) would take the bus to Afton and then be transported via taxi to the doctor's office. Melvin's mother happened to be the taxi driver. Interesting, indeed.

Melvin also told me that a small stretch of original Route 66 near the Sidewalk Highway used to go across his land, very close to his house. Vestiges of it are still visible there. In order to make his driveway, he broke up a stretch of it, and the pieces of concrete were used to face a couple of buildings in town. The old post office building is one of them. 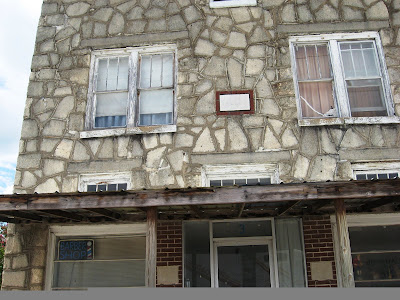 Say goodbye to the little building on the curve at Dead Man's Corner, also known as 5 Mile Corner by Afton residents. It was once Chubby's Bar and later a flea market. The two country boys who now own it plan to tear down what's left of it. A plaque in the floor indicates it was built in 1948. They have lived in the house behind it for months, with no electricity or running water until just a week ago. They intend to improve the look of the land, but I'm sorry to see the old building fall. 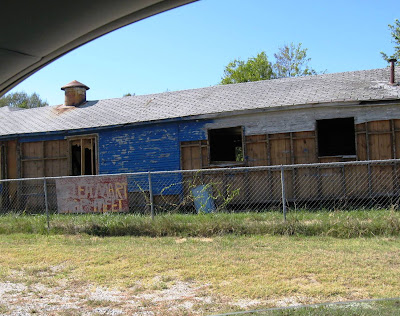