Although our entire morning was devoted to acting as "headquarters" for the Afton Route 66 Clean Up Day", we certainly didn't forget those who came as travelers throughout the day. More about both of those groups shortly.

First, I must say that Friday afternoon was quite an eye-opener for me. Ron M. and I decided to spend the night up in Miami (OK) so we'd be closer to Afton this morning, thus alleviating the 4 a.m. wakeup that we'd needed in order to get from Tulsa to Afton in time to set up for the Clean Up at 7 a.m. But before we secured our rooms at the Buffalo Run Hotel, we took a ride through the tornado-ravaged section of Joplin, MO. Since the tornado hit much of the part of Joplin that used to be where I shopped when I lived in Grove, I was almost afraid to see it in its present condition. Viewing the miles of destruction took my breath away. Although, three months after the event, much of the debris has been removed, viewing the streets full of nothing was incredible. Yes, there are some people who have already started to rebuild. But for the most part it is just flattened. I was astonished. I was sad. I was hopeful.

So. . . this morning we arrived at Afton Station at about 6:30 a.m. Marly and Phil were already there and had set up the tables and brought most of the equipment outside. Those guys are just fantastic! We got the coffee pot started, put out the donuts, and people started arriving. We had about 40 people show up for the event, most either current residents of Afton or those who had grown up there but moved away. But we also had families from afar -- Sand Springs, Broken Arrow, Tulsa OK, and Wichita, KS -- who had no particular ties to Route 66 or Afton, but who just heard about the event and wanted to help. My friend Brad Nickson, Eastern VP of the Oklahoma Route 66 Association, came from Tulsa with his camera and his excellent photography skills. His whole album is here: Afton Cleanup - Brad Nickson - Picasa Web Albums. Be sure to check it out. Thank you so much, Brad!

D'ann Mathia, a local, took over the task of assigning jobs throughout the town. Remarkably, even with all those folks out there working, we finished up everything on the task list by noon. At that time, we had painted all the fire hydrants in town, cleaned up myriad acres of brush and weeds, swept sidewalks, washed windows, and trimmed around several historic buildings in town. I use the word "we", to mean those who were out there working. That did not include me. Some of us stayed behind to arrange lunch and keep the Station open for visitors.


We had 21 travelers come in during the pandemonium, too. They came from Grove OK, Springtown TX, Oklahoma City, OK, Claremore OK, Jenks OK, London England, Ardmore OK, and one gentleman who simply signed in as "No Fixed Abode".

This couple, who rode in from Oklahoma City on their Harleys, arrived near the end of the day when we were trying to figure out what to do with all the leftover food. Since they said they were celebrating their 6th anniversary, we presented them with a gift -- a baggie filled with leftover hot dogs. This did, of course, lead to many weenie jokes, but by that time of the day we were all pretty silly-tired. 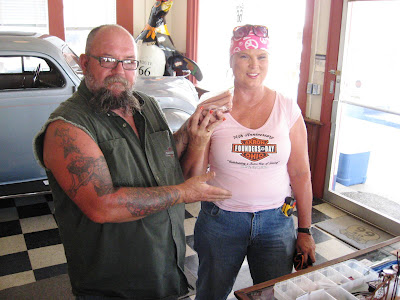 Marly cooked the hot dogs on his brand new grill! 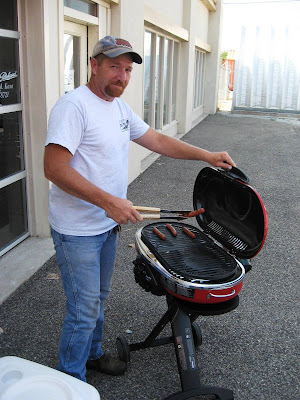 All in all, it was a great day, and many thanks to all who participated!!!
Posted by Laurel at 5:54 PM

Congratulations! Job well done, not only the end result but getting that many people from the relatively small Afton population to work together for the good of all. We could use some of that spirit everywhere.