It's been a week.   Valentine's Day has come and gone.   Warm weather here in Oklahoma is slowly turning a bit more winter-like.  And I've been busy.  Therefore, consider this a "slide show" of what's been happening here.  Not many words, just photos. . .

Yesterday Ron M., Joe M., Jim M. and I took a road trip to Elk Falls, Kansas, known as the Outhouse Capital of the USA.   What we saw there was a near ghost town, the falls for which the town was named, and a bunch of.... you guessed it.... outhouses.    Voila! 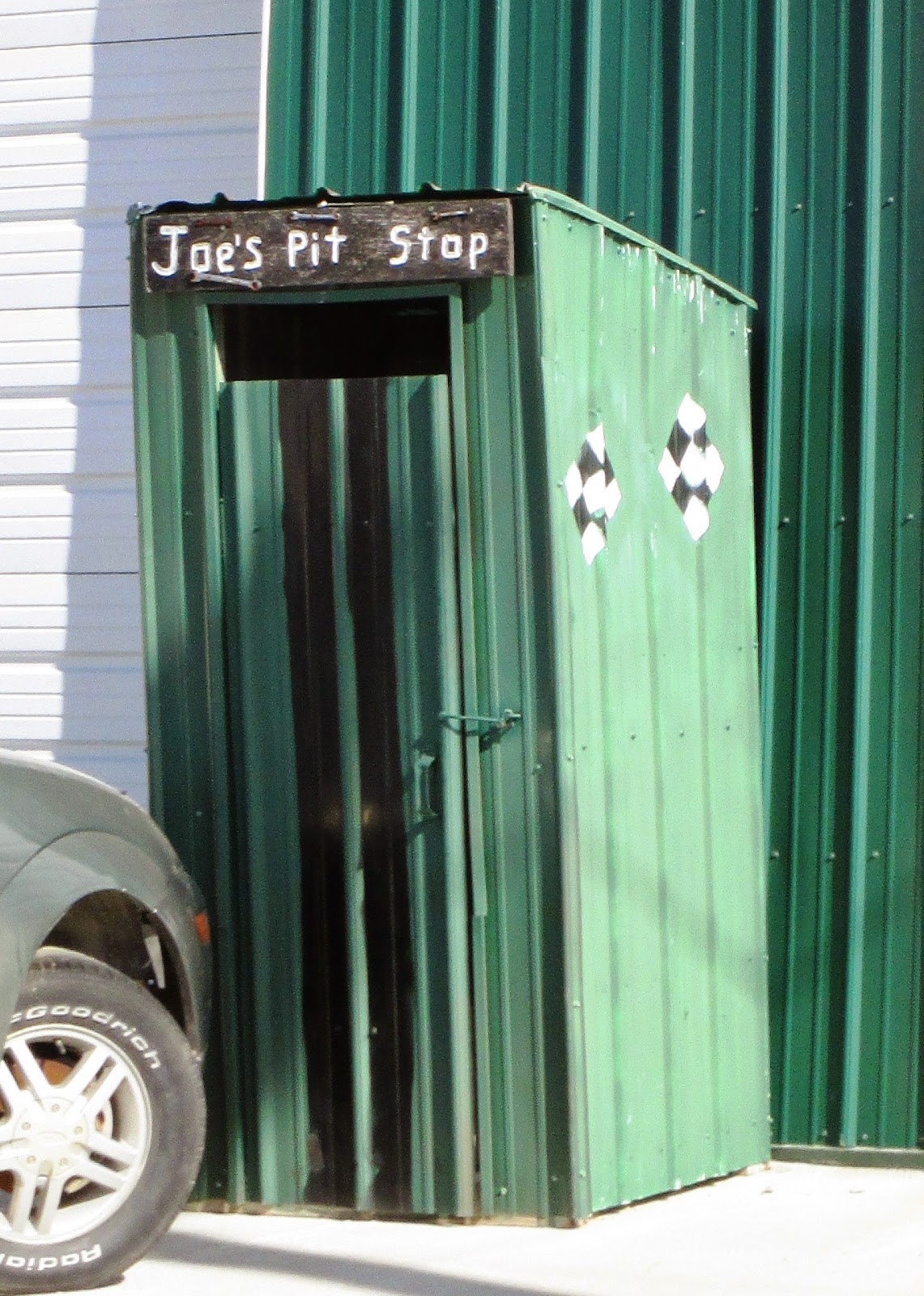 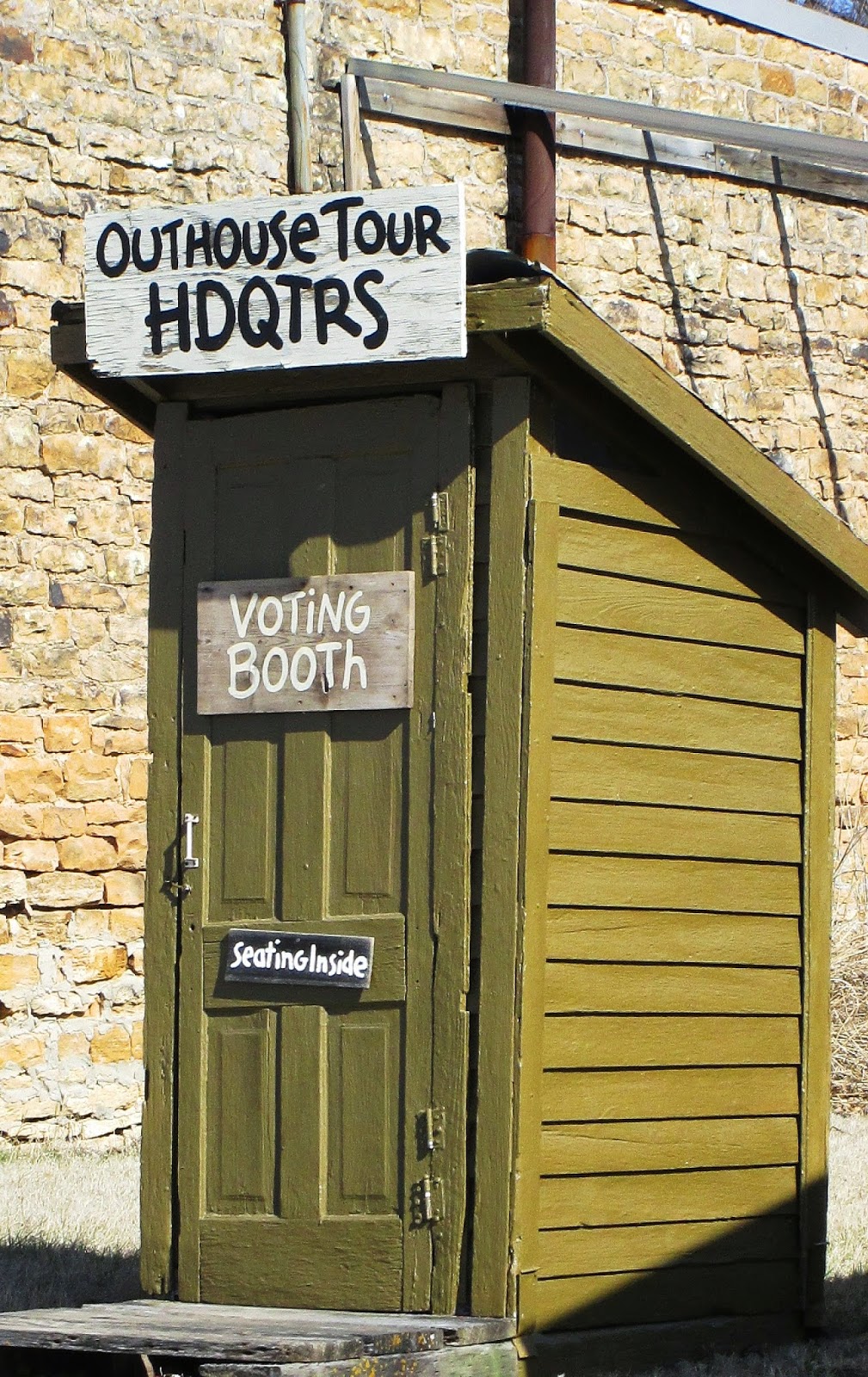 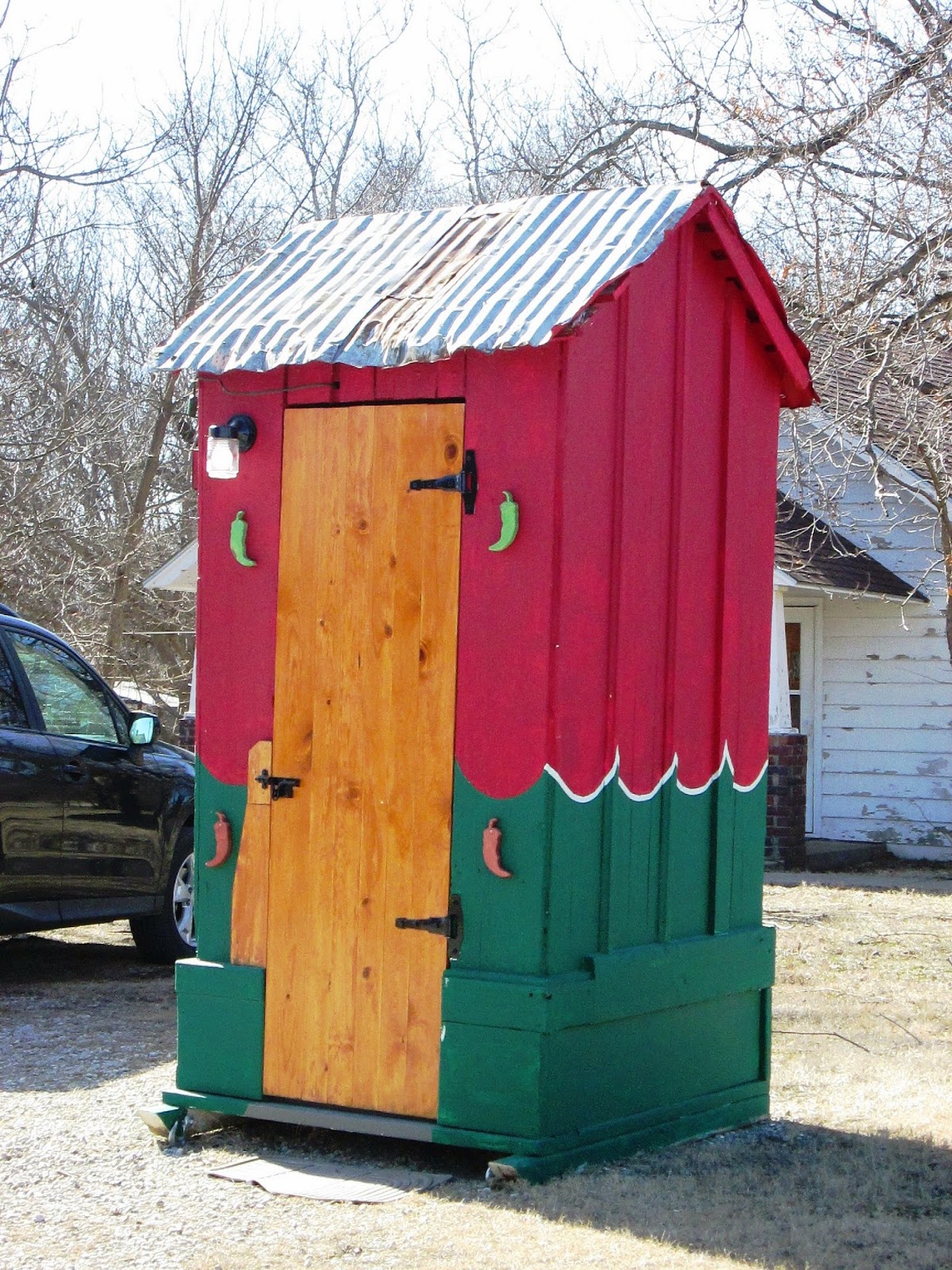 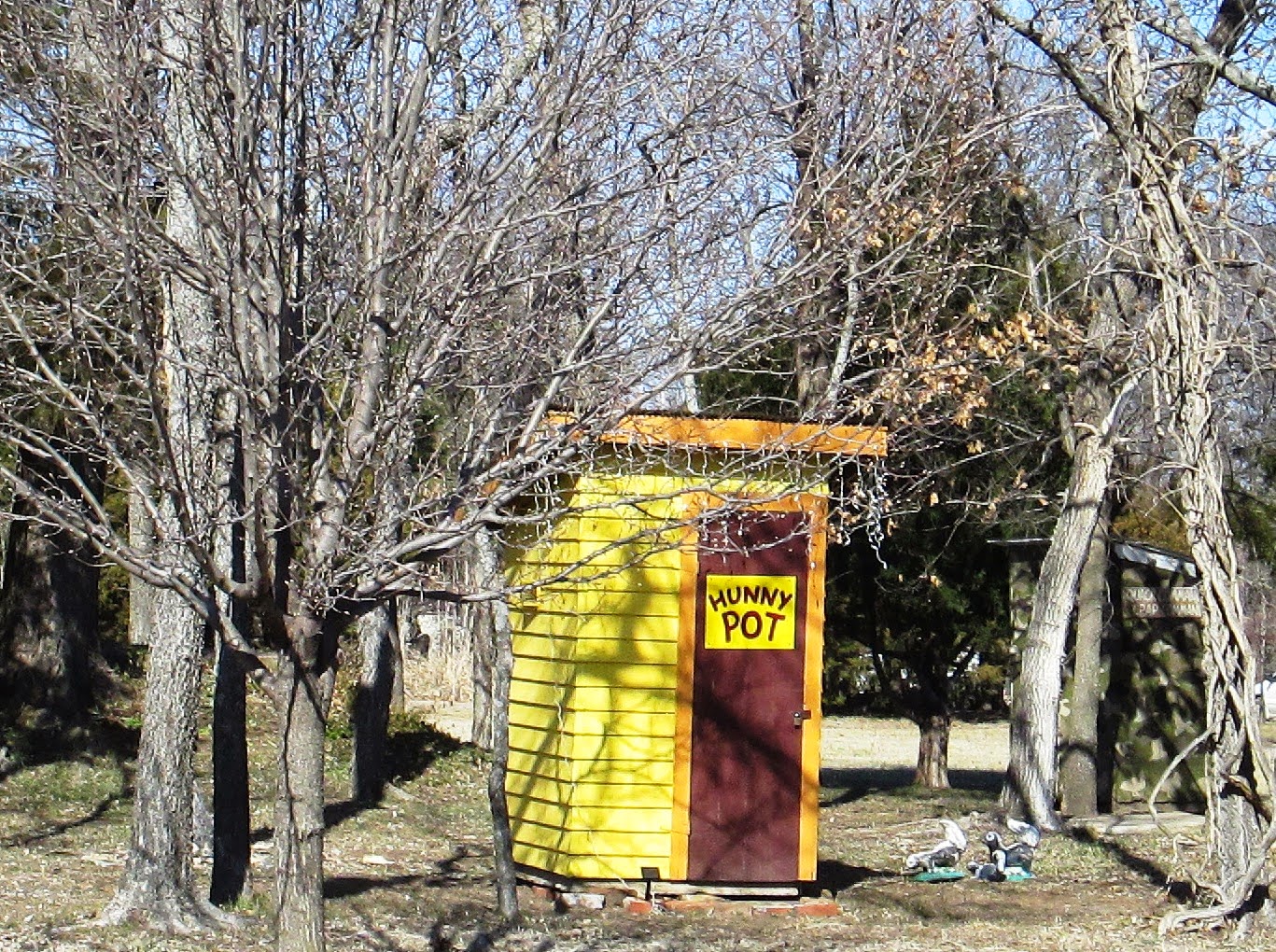 The outhouse in this last photo is next to an old one-room schoolhouse. 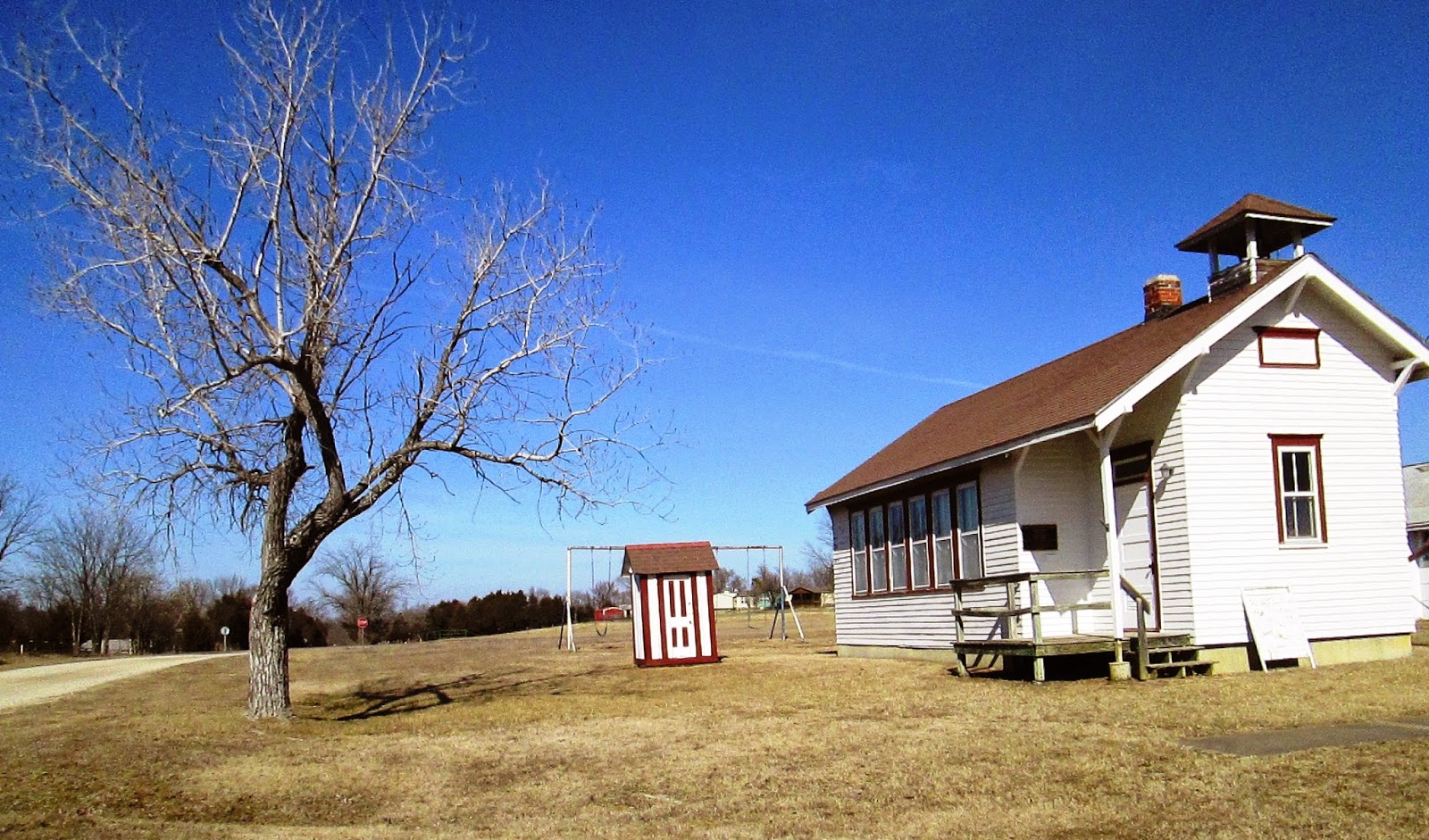 Here's the pretty falls for which Elk Falls was  named.  And here is the old bridge spanning the river.  It was built in 1893 and is called the Pratt Truss Bridge.   It is on the National Register of Historic Places, despite it being hidden away and rather hard to find. 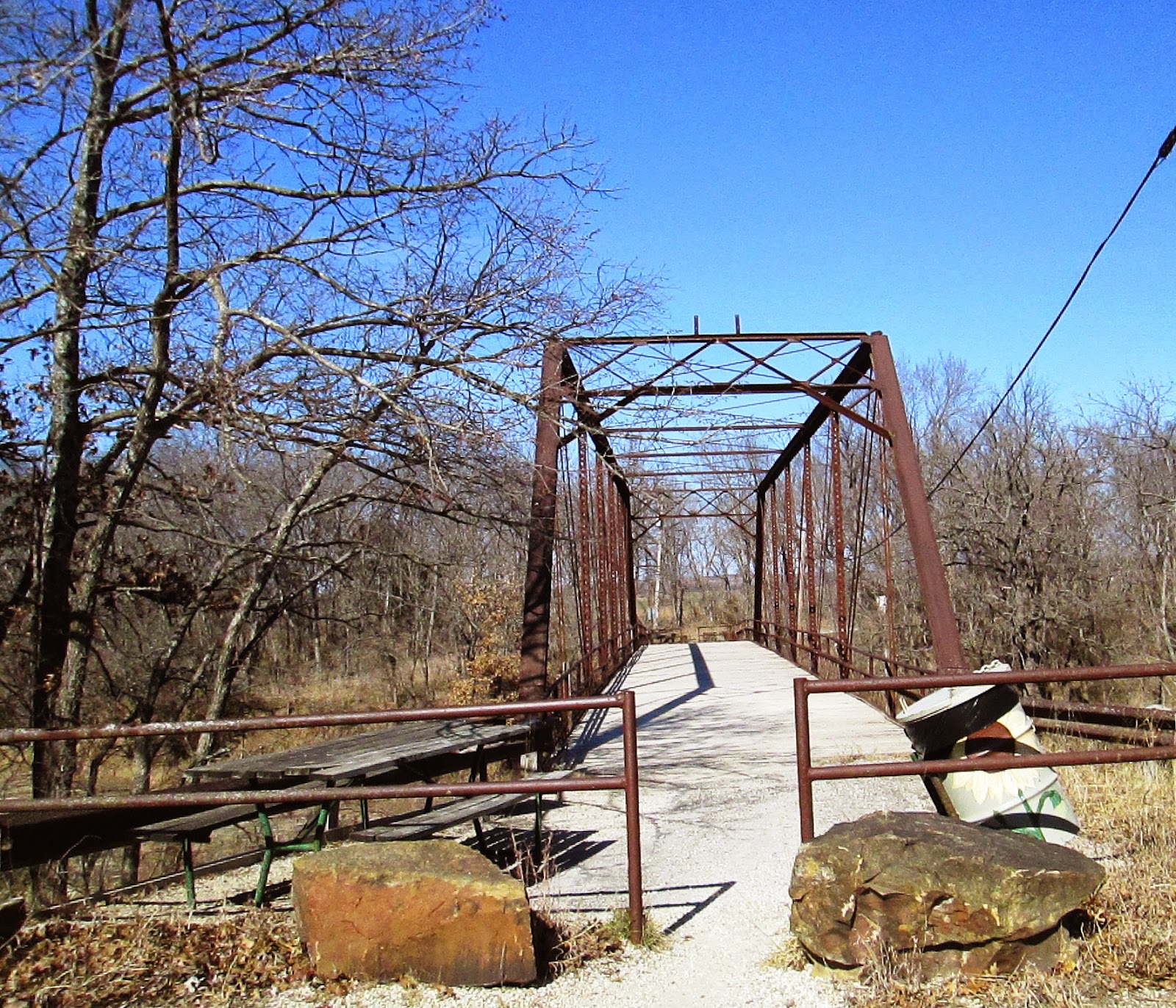 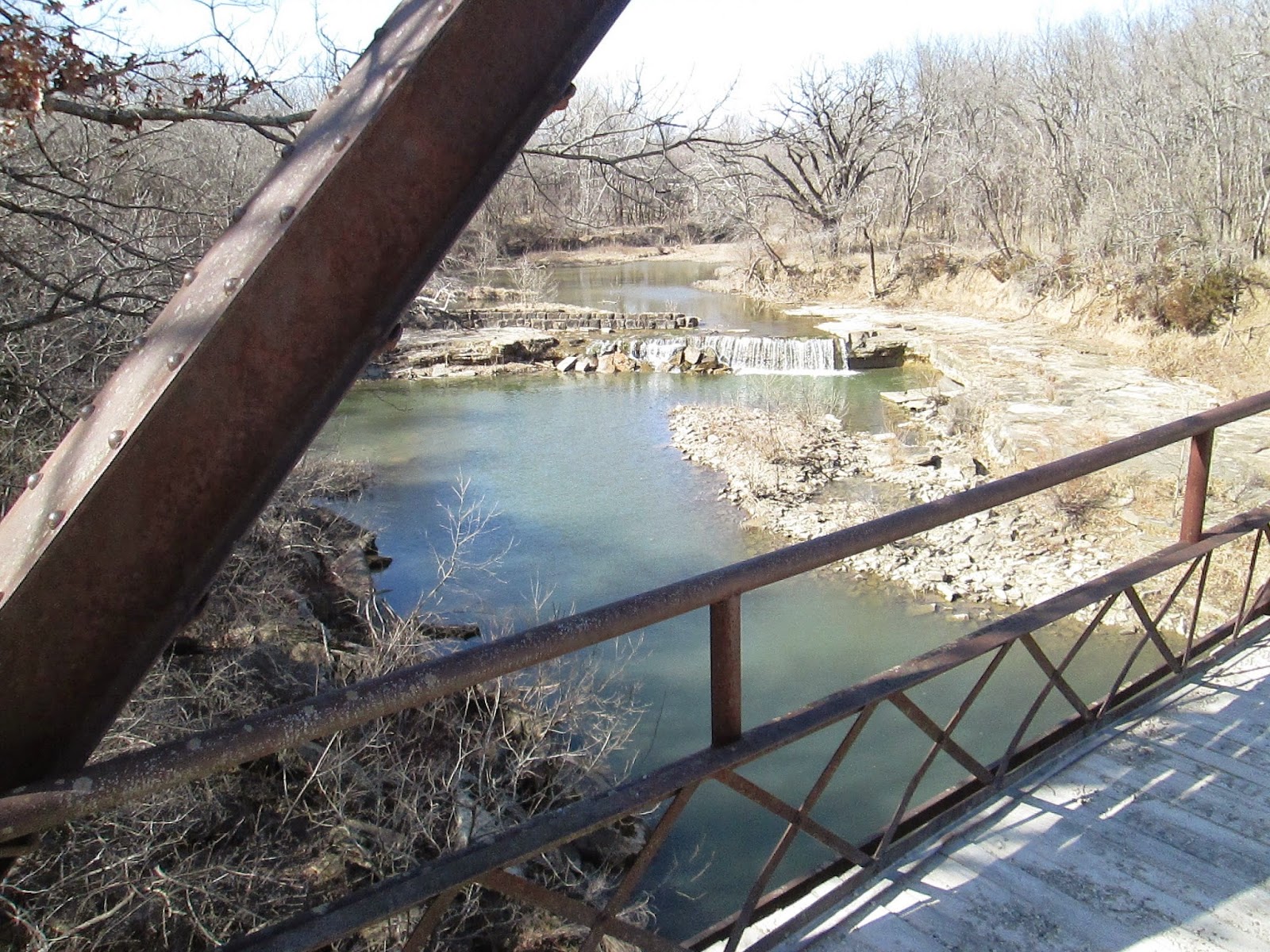 Since the town of Afton can't seem to get it together enough to erect the new "Welcome  To Afton" signs which were approved and ordered a full year ago, we thought perhaps I could donate a couple of old Packard doors and make some signs for the town.  What's good enough for Elk Falls, KS is good enough for Afton! 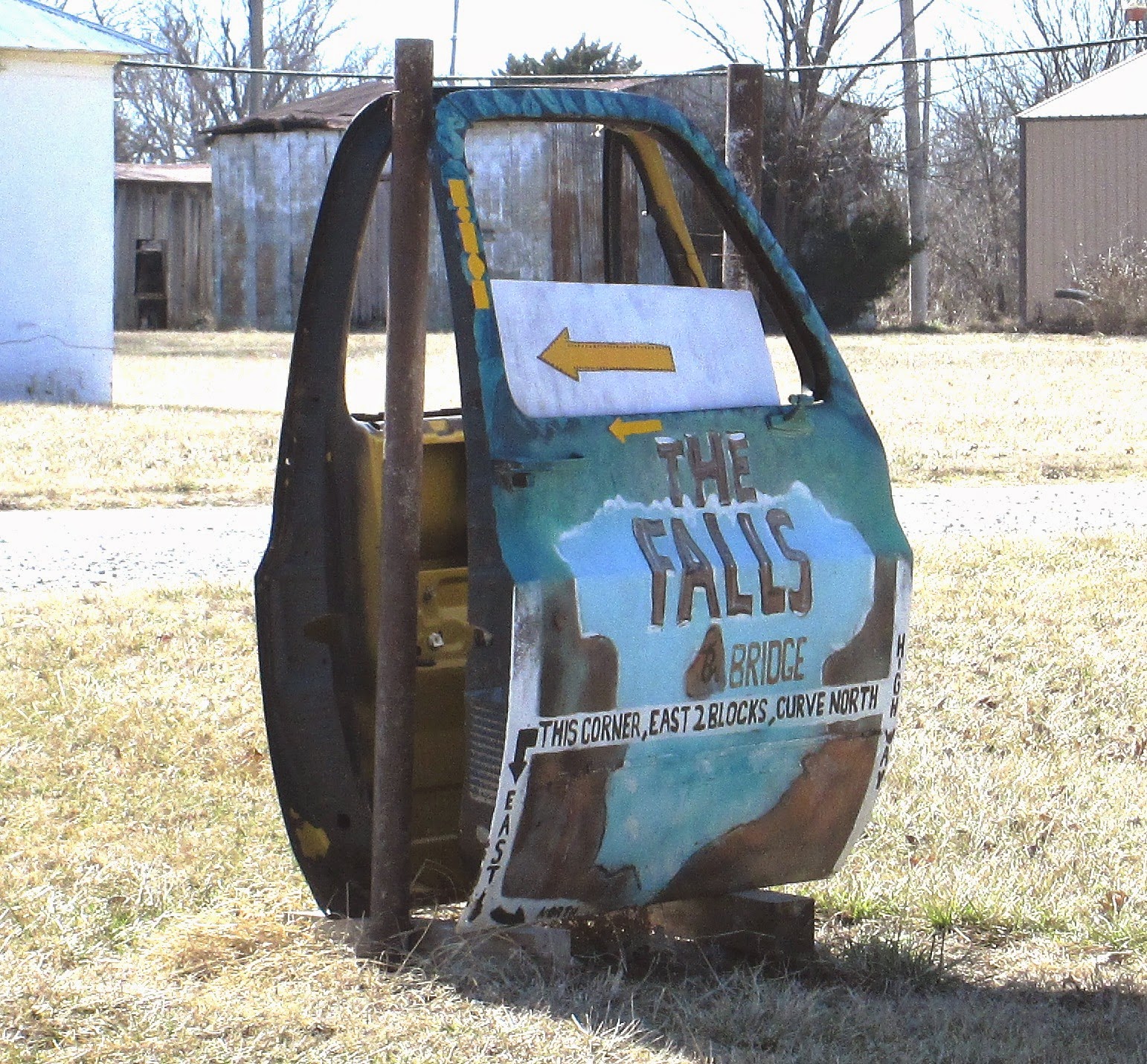 We stopped at Riverside Park in Independence, KS.  Most of the features there were closed for the winter -- the zoo, the amusements, the stadium -- but it's still a lovely 100-acre park with the Verdigris River  flowing through it, and this statue of a football player who is a native son.  The Shulthis Stadium held the first nighttime baseball game! 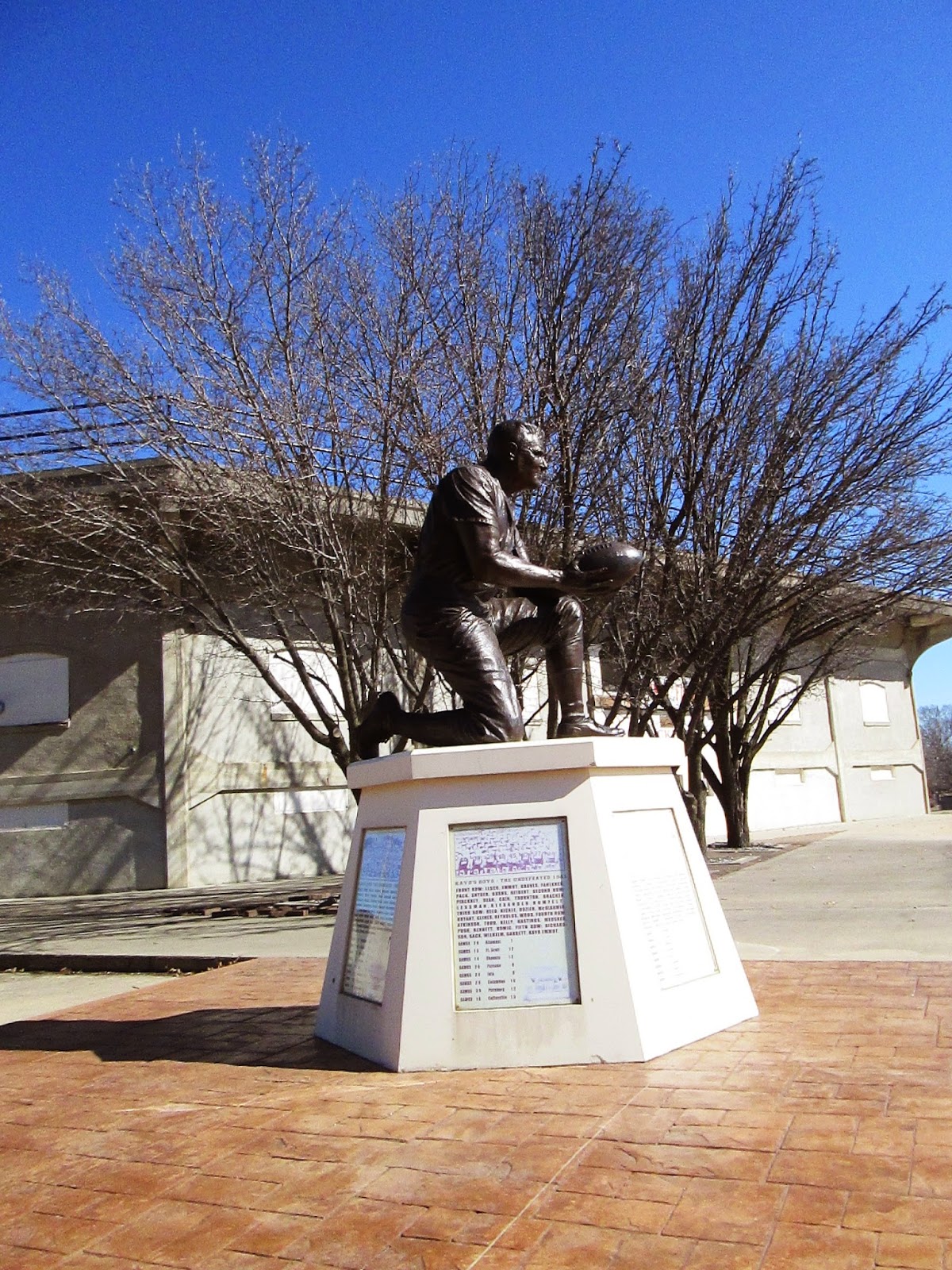 Meanwhile, back home in Tulsa, I did some exploring during the week.  Ever since I've lived here I've looked for flocks of sheep.  Sheep have always been scarce here in "cattle country", but I miss them after having raise a flock ourselves back in the '70s.  Well, lo and behold, on Thursday I found a pasture of grazing sheep less than a block from Route 66 in the city of Tulsa!!!  How had I missed them before?   You can see them for yourselves just south of 11th St. (Route 66) on 129th E. Avenue.

I also found this cut, just north of town.   You'd never know you were in Tulsa!  I was taken by surprise.  It's no Hooker Cut, but it's pretty impressive! 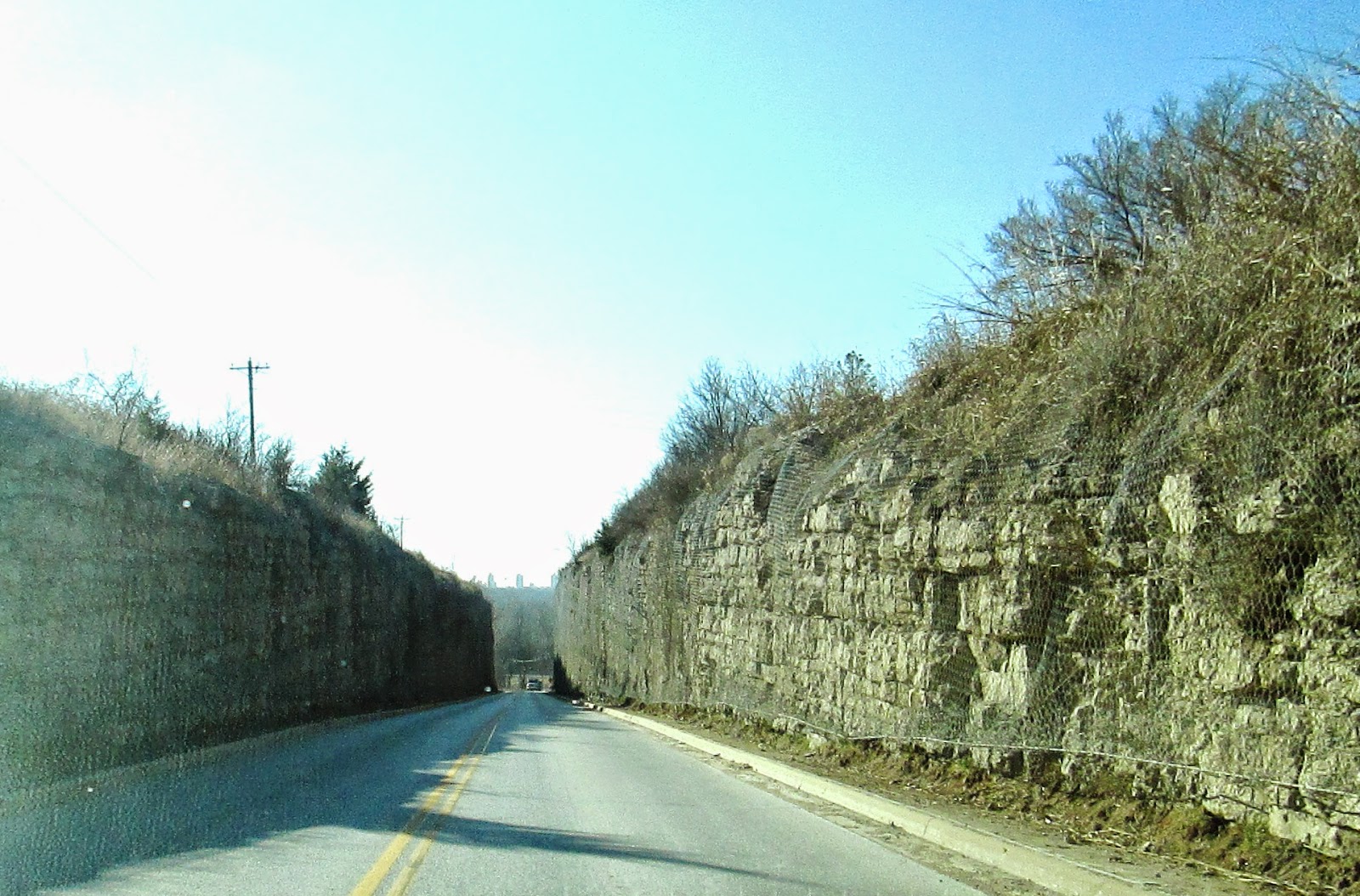 This is a more typical scene in Tulsa.  Brown roof after brown roof, as Tulsa builds and expands.   There's no doubt that Tulsa and it's environs are up-and-coming, but in all the seas of brown shingle pointed roofs, I'm not sure how people find their way back to their own houses at night!

Independence is the hometown of writer/playwright William Inge. We all assumed that the film "Picnic" (1955) had been filmed there as the big park looked as we remembered from the film. However, none of the location shots were done in Independence. The towns of Hutchinson, Halstead (Riverside Park), Nickerson, Salina, and Sterling were used. But Independence does have a history museum with a good display about William Inge and "Picnic," and the college library has a collection of all his typed manuscripts and other things he owned.

This is really interesting information. Now I want to see the film again! It's been a long time since I saw it.

In defiance of your Facebook pleas to not be jealous, I am. I didn't even know about this place before but it's on my to-do list now. It seems there is an outhouse festival each year right before Thanksgiving. Now that's the place for me!

Don't let your expectations get too high, Denny. Basically, it's a nearly deserted little crossroads with a few houses and the outhouses look like they're leftovers from previous festivals. However, come for the festival anyway! I'll meet you there and, if you haven't already done so, we can go to the Tallgrass Prairie which is nearby.
Now THAT'S worth coming for!!