To Bugtussle and Beyond

The Fab Four (Ron, Joe, Jim, and me) took a road trip yesterday.  Route 66 was not involved at all, but I know that most of my readers are roadies who can appreciate other roads too, so I'll tell you about this rather odd trip.

The original goal was the Lake Eufaula region of Southeastern Oklahoma, as Joe had something he wanted us to see there.  But like all good roadies, the trip took a number of turns and twists and we found some interesting sights along the way.

McAlester is a mid-sized town with some interesting buildings in the "old" part of town.  On opposing corners of one intersection stand these two dueling filling stations, a Phillips and a Sinclair, both in quite good state of preservation in what is called "Old Town". 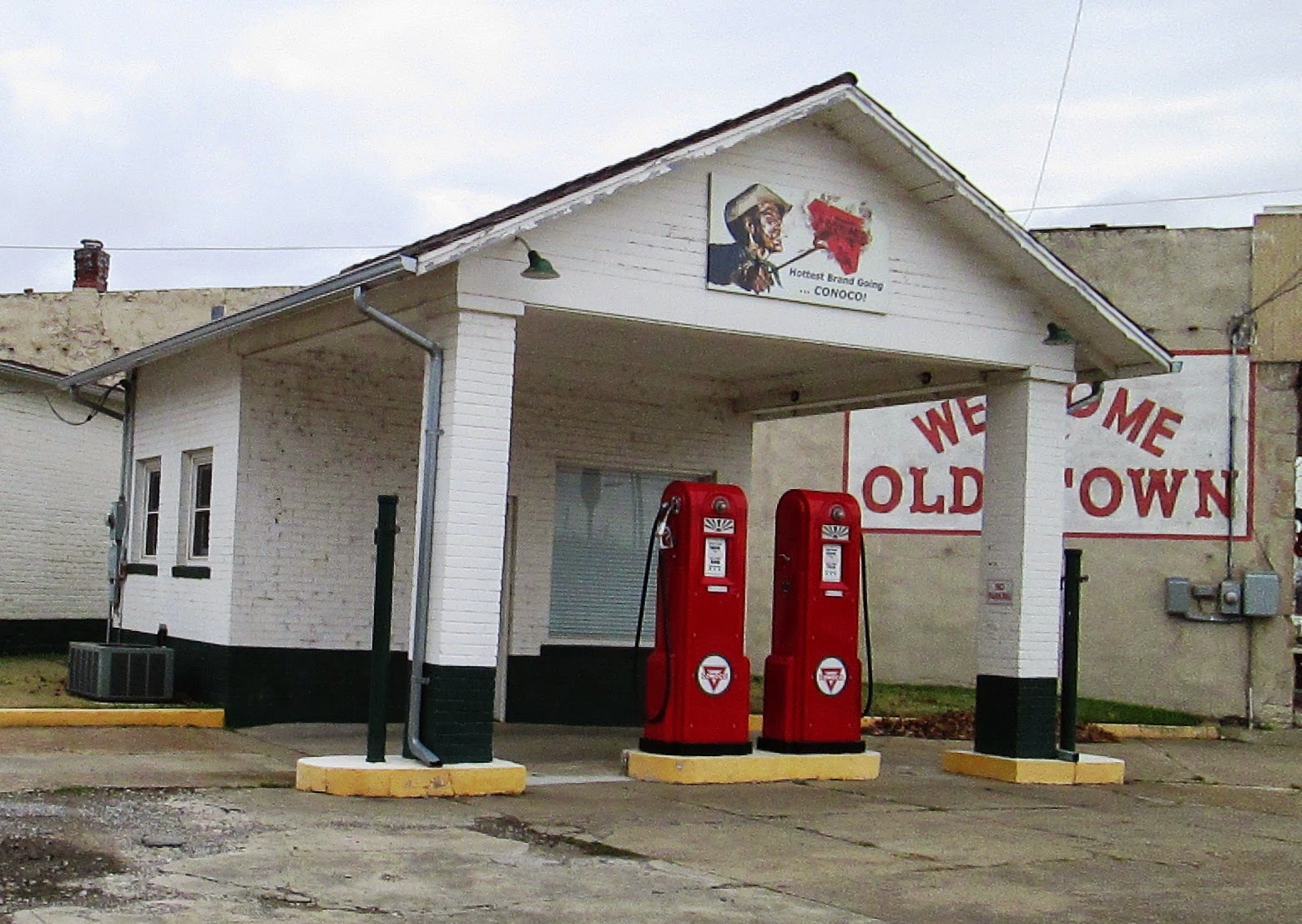 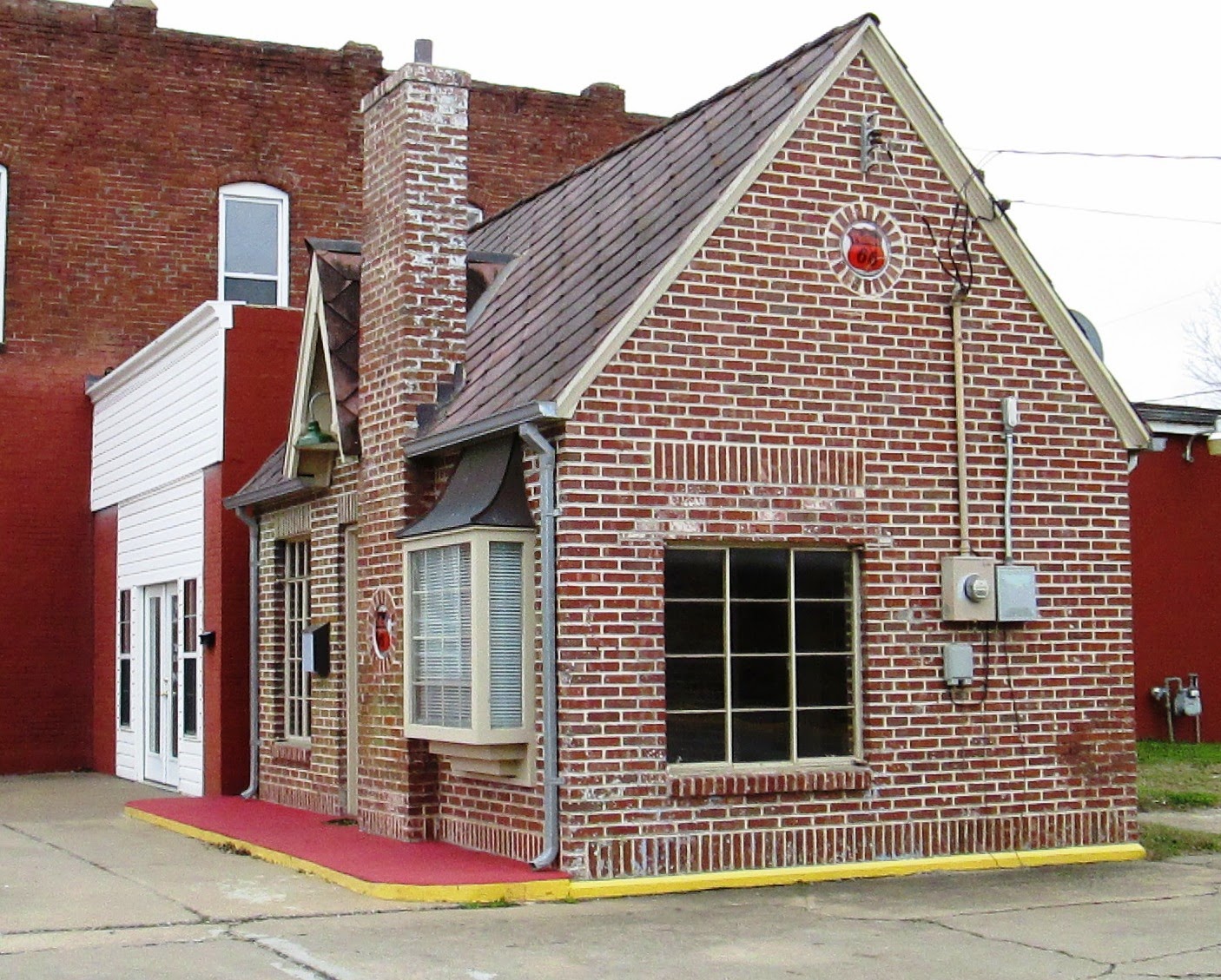 Ever since coming to Oklahoma I've heard about the town of Bugtussle, birthplace of former Speaker of the U.S.  House of Representatives, Carl Albert.  The town seems to get its fame more for it's interesting name which brings smiles to one's lips than to it's most famous citizen.   We decided we needed to find Bugtussle.

Hah!  Not as easy as it may sound!  In fact, we still haven't found it.  The closest we came was this sign, which had obviously been hanging since 1994.  Scrambling for our iPhones (and there were three of them in the car!) we learned that another name for Bugtussle was Flowery Mound, so perhaps Bugtussle has faded altogether into Flowery Mound... although we didn't find much of that, either.   We did find a sign indicating the birthplace of Carl Albert, a cleared field.  The whole hunt was quite frustrating, so we went on to other more accessible and interesting places. 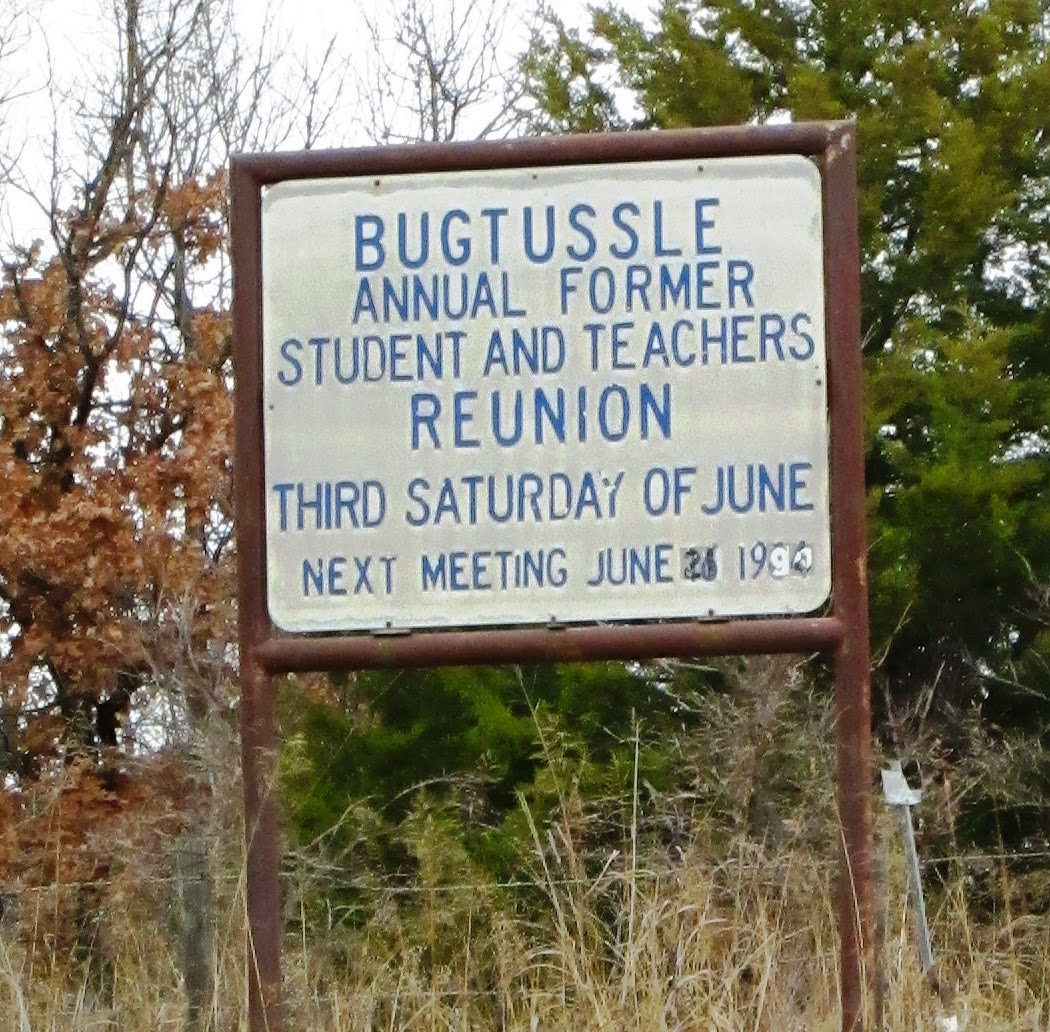 The Oklahoma State Penitentiary (nickname Big Mac) is definitely more interesting and not hard to find.  It's huge, and just as ominous and bleak as one would want one's prison to be. I hope you can enlarge enough by cliciking on this photo to read the interesting history of the place. 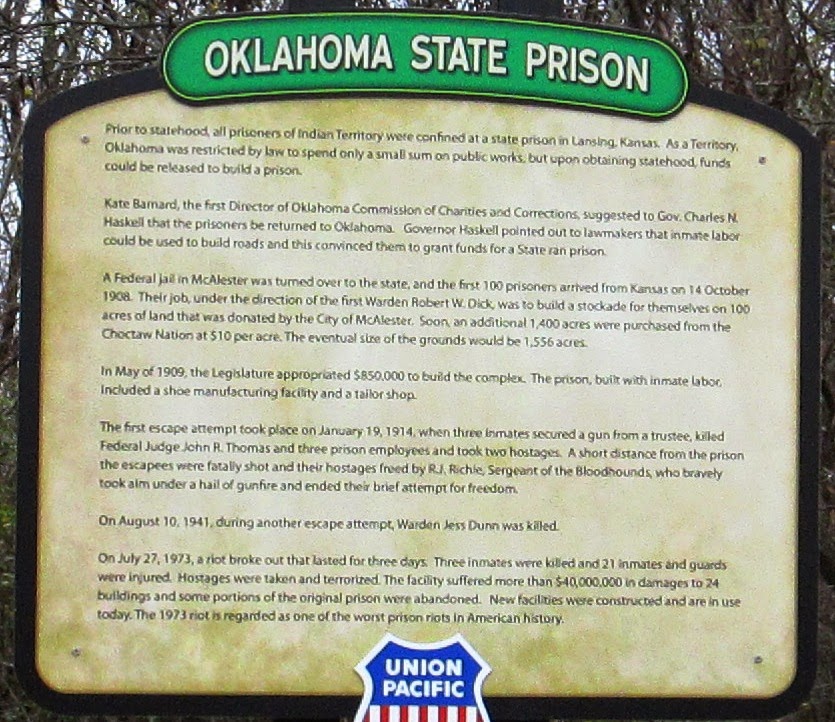 The bad guys won't be getting through this perimeter unless they want to tangle with the razor-sharp concertina wire atop the fence, and the many guard houses all around.ensure that the spying eye radar won't miss a gap. 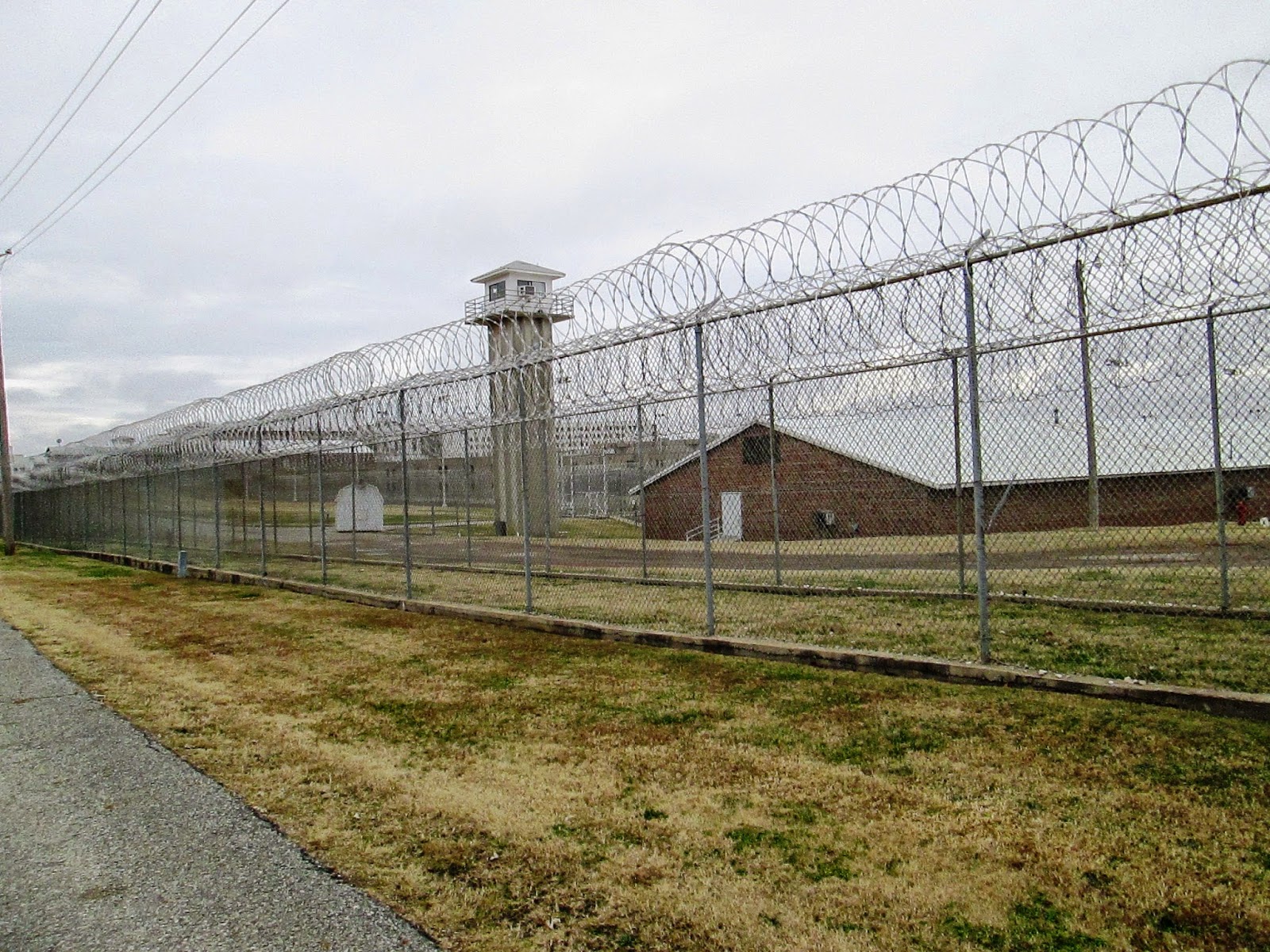 This very nice house belongs to the Warden.  I'm not crazy about the neighborhood, however. 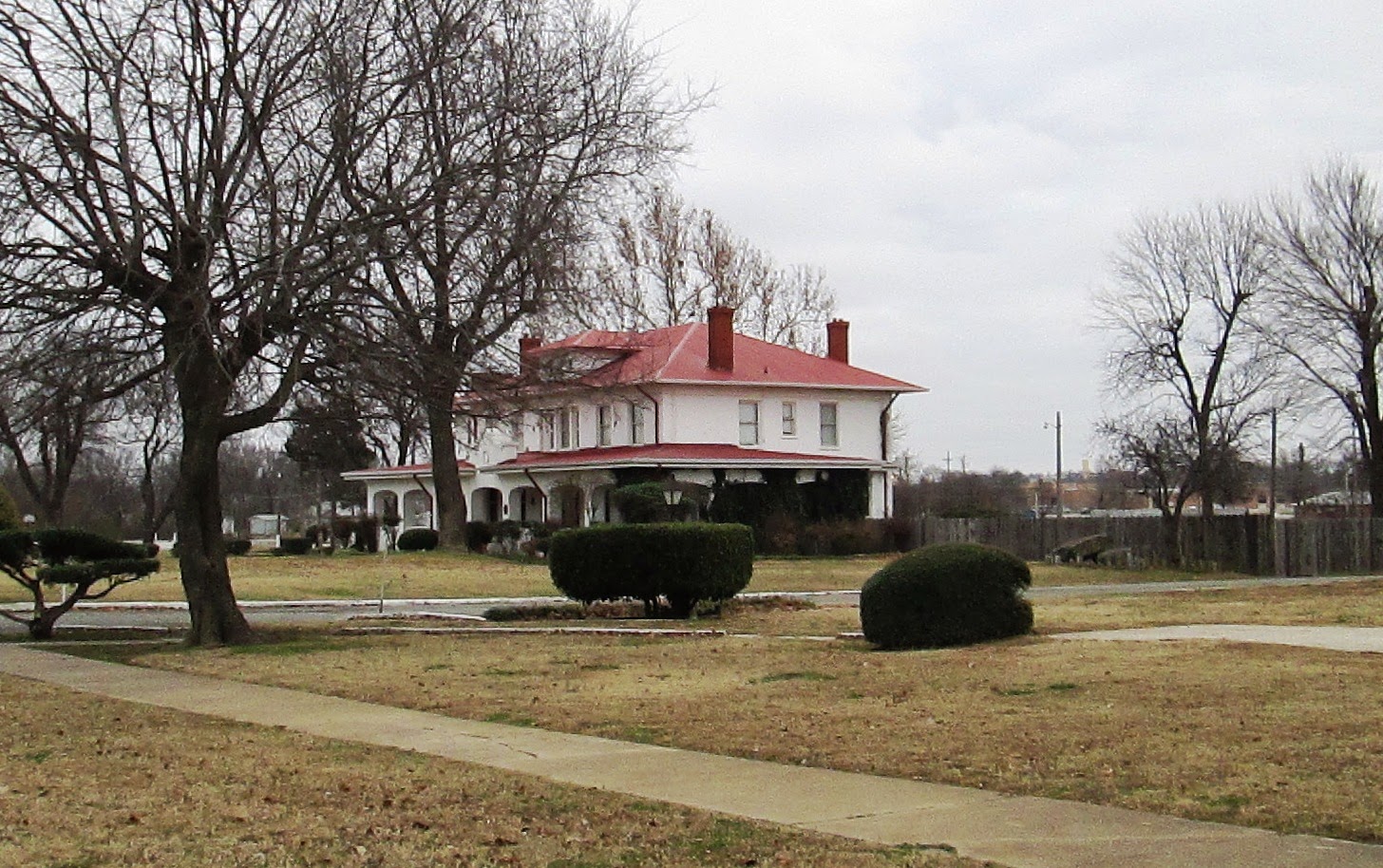 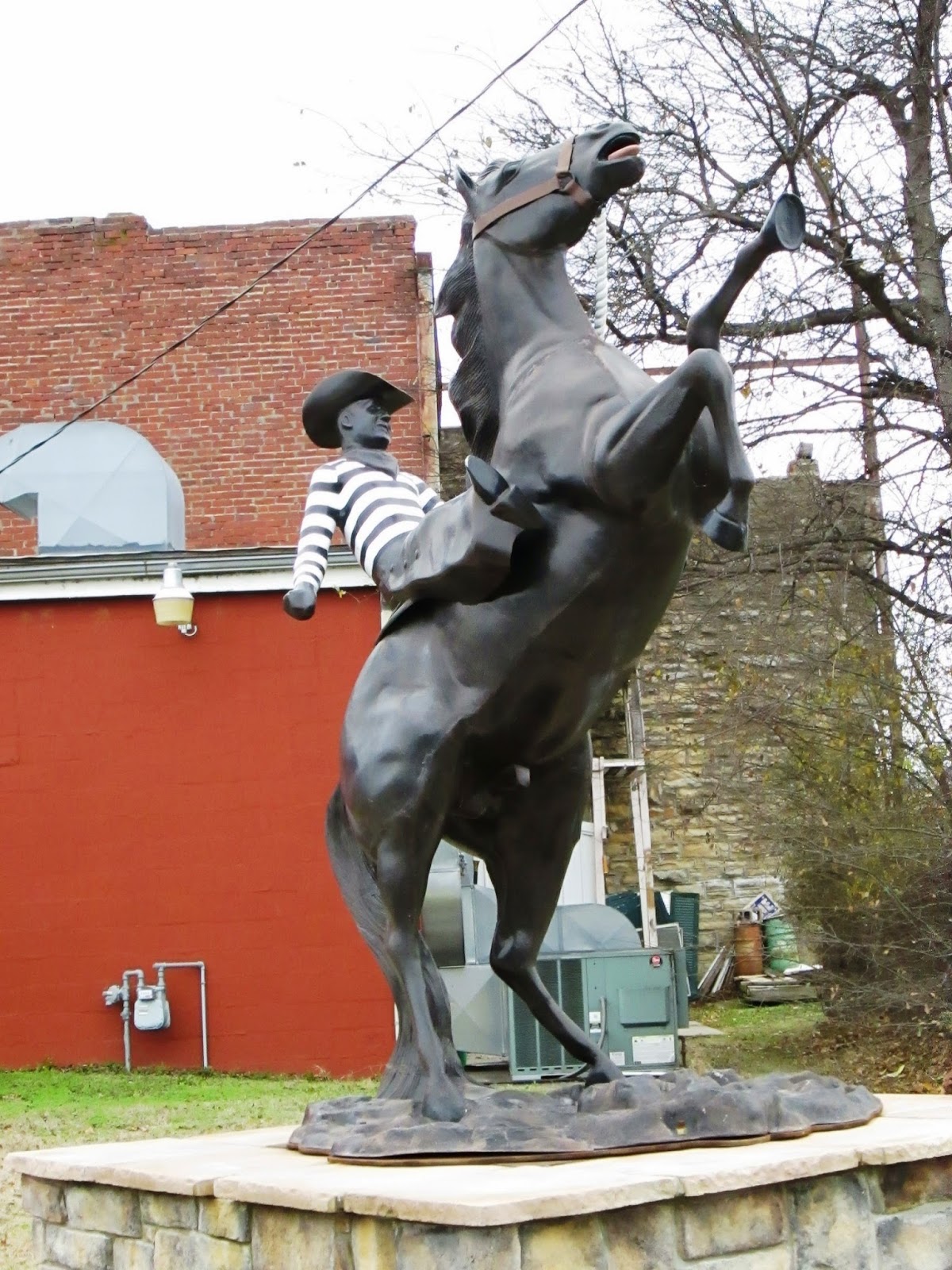 This statue of a rodeo cowboy is one I've seen other places in the state, but this is the first one I've seen with the prison striped shirt on the cowboy.   It reminds us of the annual prison rodeo, as well as showing us that the corrections people in this state have a sense of humor.

We still hadn't reached the goal of Eufaula, but we were getting hungry.   We were within a couple of miles of the town of Krebs, which is a perfect place to be getting hungry.   Settled by Italian miners years ago, the town has about four or five fine Italian eateries (unusual for Oklahoma) and we chose Roseanna's where we stuffed ourselves dangerously full of pasta and salad.  Oh my, it was GOOD!   Krebs also has a magnificent Italian grocery store named Lovera's, but we didn't stop on this trip since I've been there a number of times before to buy their fabulous homemade cheeses and sausages. 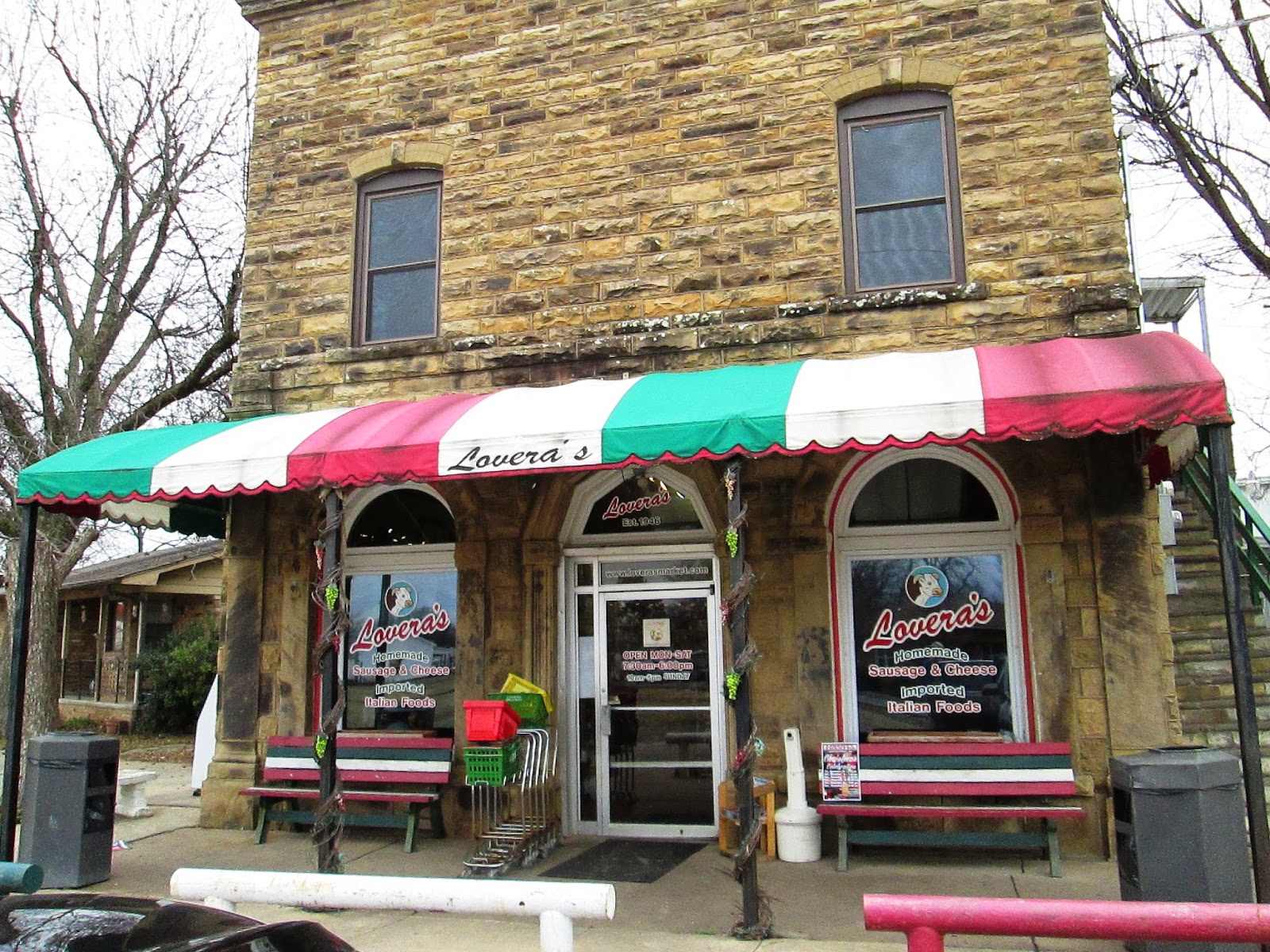 At last we reached Eufaula, a beautiful part of Oklahoma with rolling hills and the large Lake Eufaula.  Even on a grim, gray sunless day, I was taken by the beauty of the area.   The destination Joe wanted us to see was Carlton Landing, a planned community on the shores of the lake, and indeed it was interesting and quite lovely.  Homes are being built constantly, and although they are all different, they follow a directive that they be two-story with lots of porches, high ceilings, and soft antique color schemes.  The residents of the upscale community have a communal garden and raise some livestock.  They are about to open a "general store" and a community center.  http://carltonlanding.com 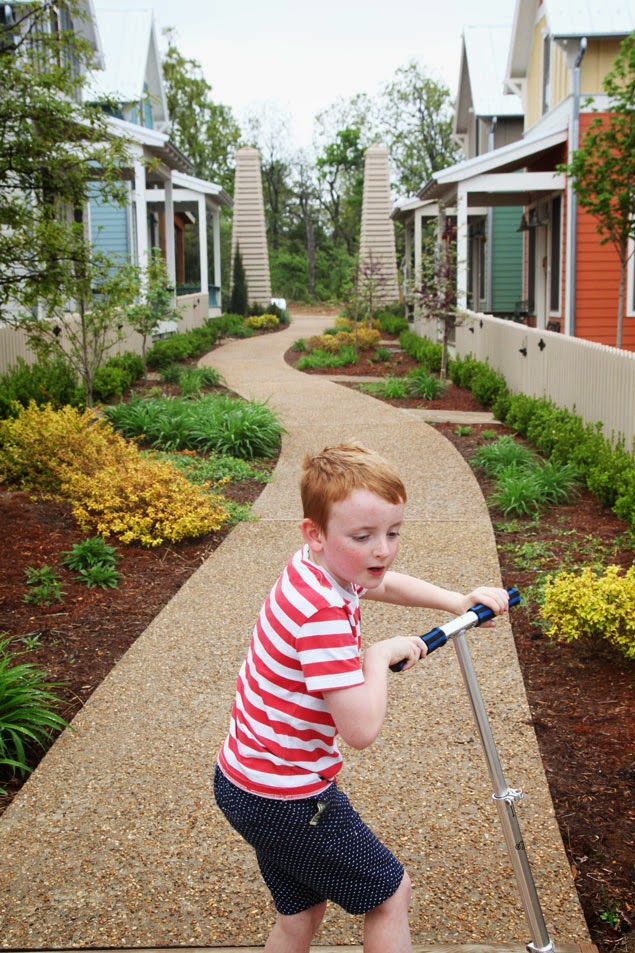 It was another full day of new sights for this adopted Okie.   There's so much to see and do in this state, and it isn't all on Route 66!

Don't take this wrong, but golly gee, I'm glad you didn't have to open the store and could have a little trip. Thank-you for taking us along. I had a delightful time.