This Sunday at Afton Station on Route 66 in Afton,Oklahoma began with some intrepid bicycle riders and ended with an interesting old-fashioned way to transport one's luggage on a Route 66 trip. 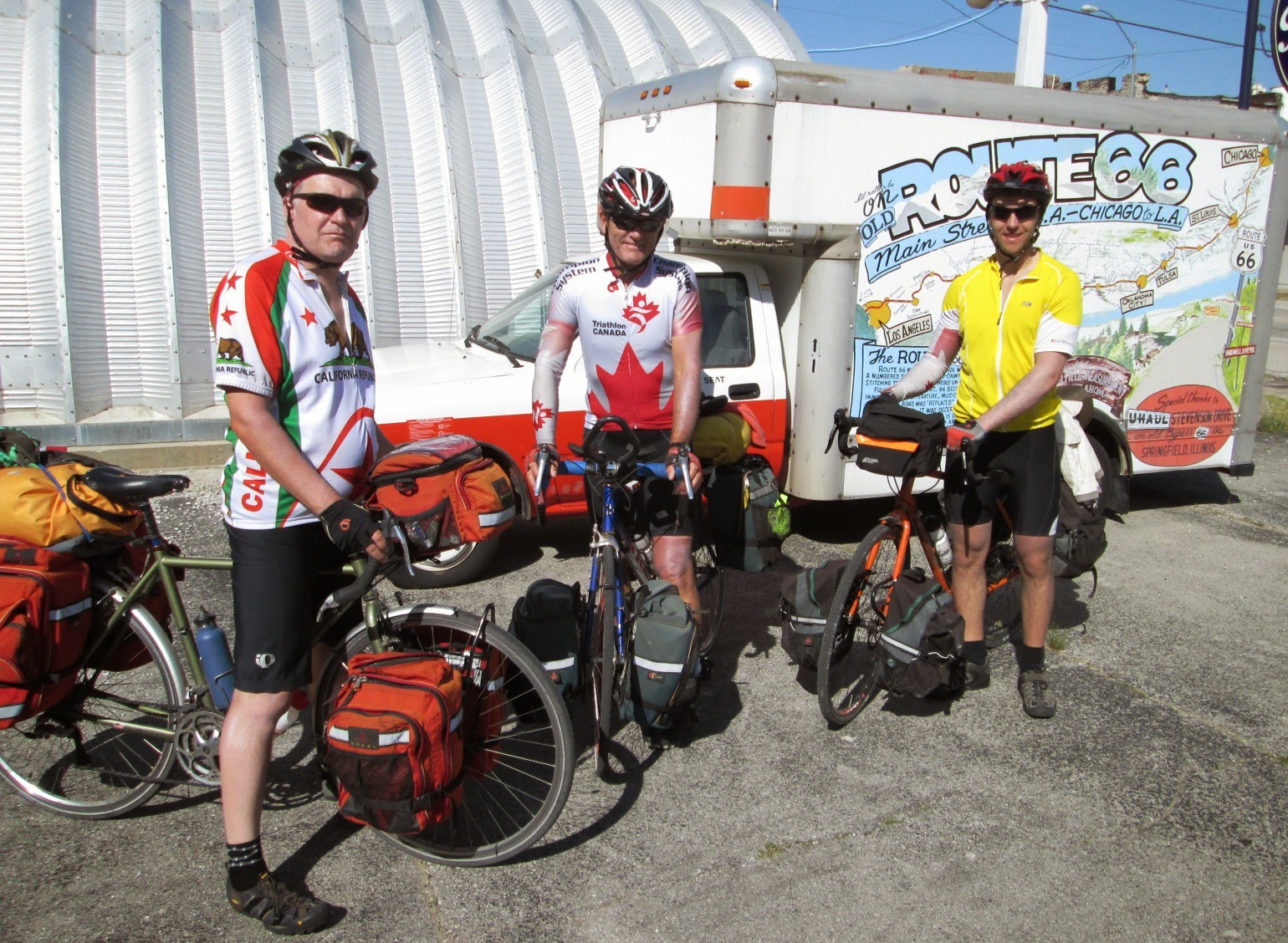 These three guys from Halifax, Nova Scotia have my undying admiration.  They are bicycling from San Diego, CA to Toronto, Canada.  That's a lot of miles!   I'm thrilled that they decided to ride Route 66 for a good bit of their trek.  They are a father, son, and friend.   Check out thoughts and photos from their trip at their Facebook page:  San Diego to Toronto Cycling Trip 2014. 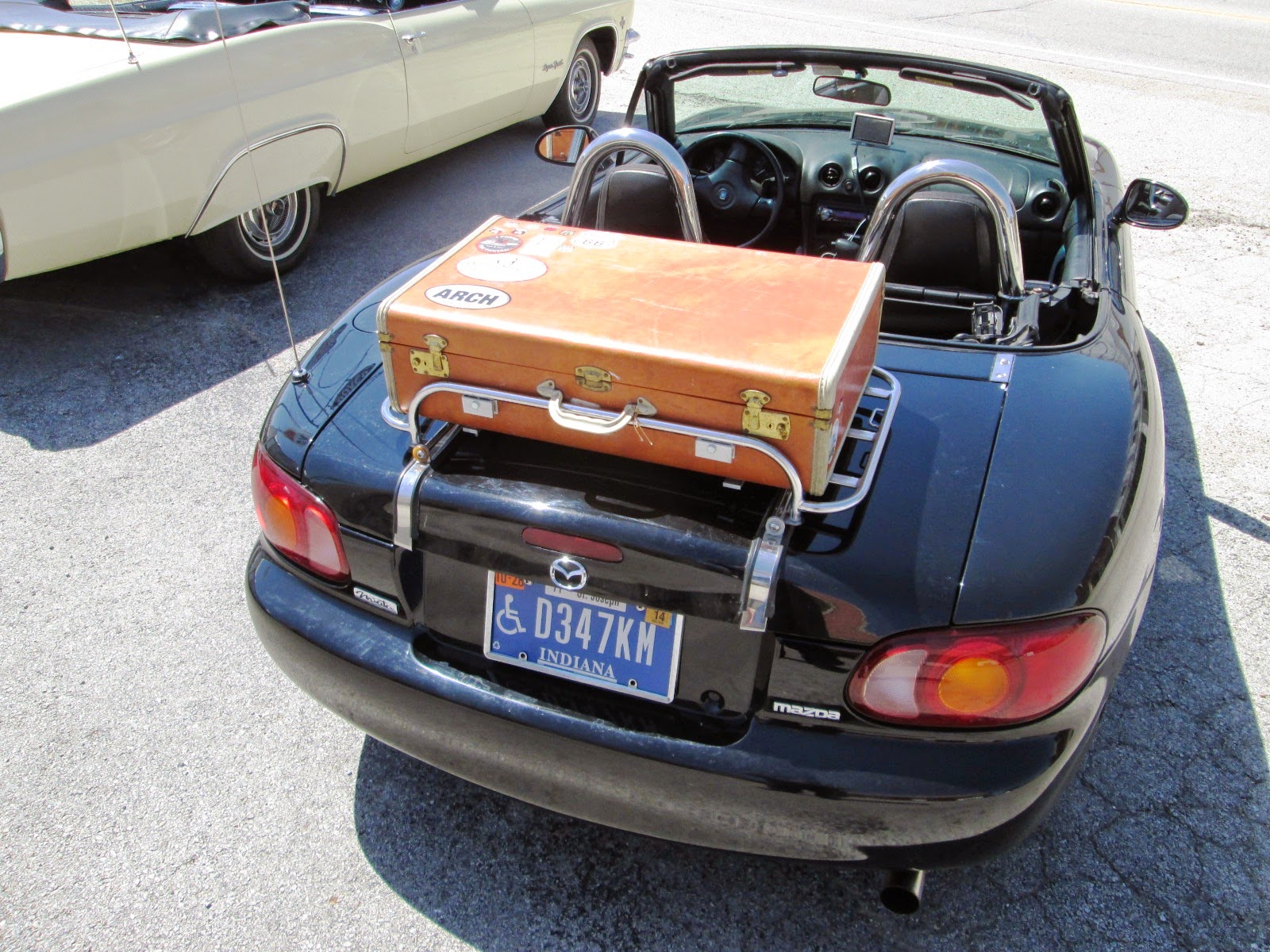 At the end of the day, a couple from South Bend, IN heading for Pasadena, CA on Route 66 have brought back an age old way of transporting their luggage... on the back of their Miata!   They haven't tested its waterproof qualities yet, but aren't very optimistic about that.  In the meantime, it's very much increased the available square feet of baggage space.

And in between we had many, many other visitors. 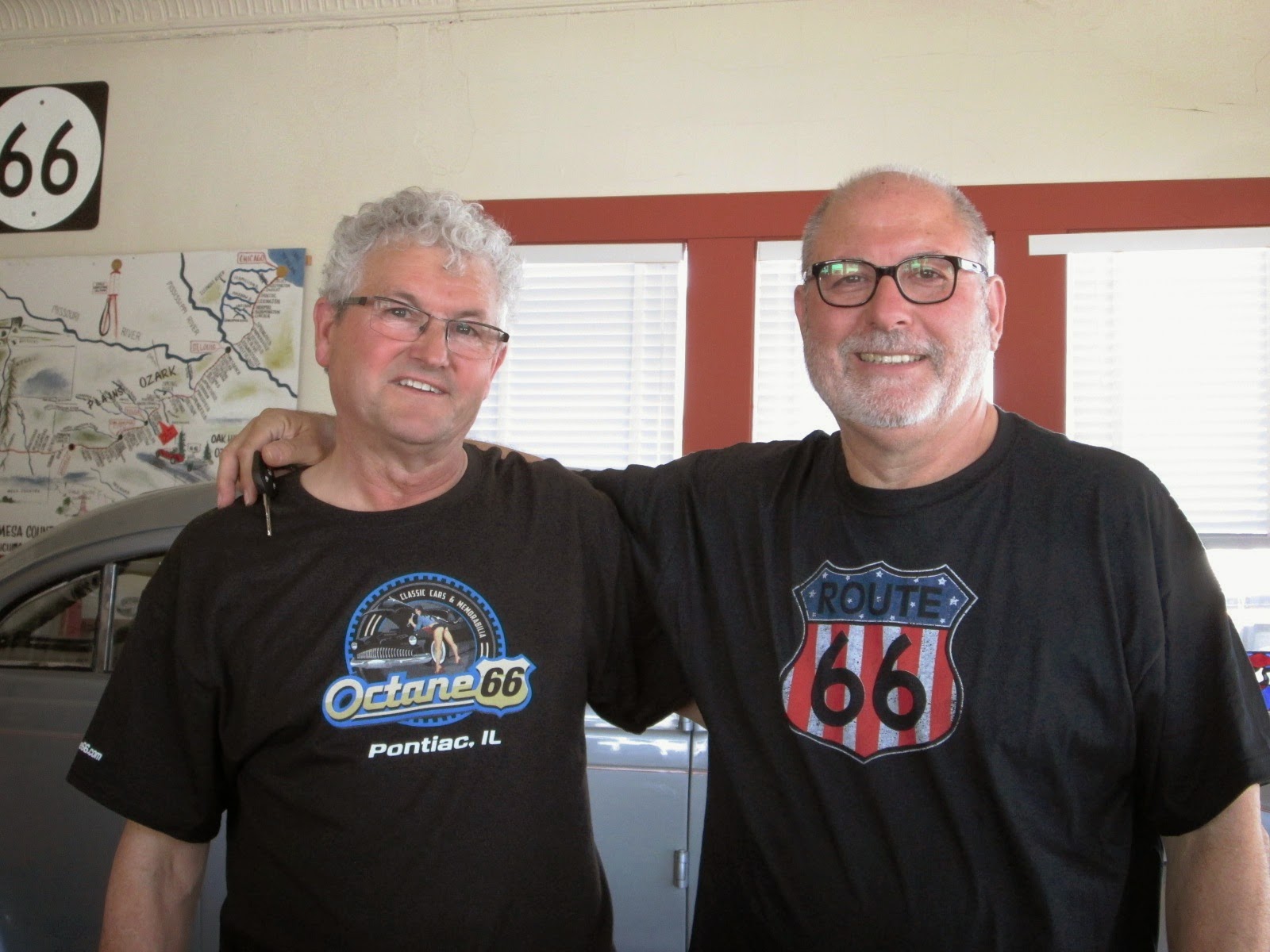 For example, these two gentlemen from Barcelona, Spain who are traveling Route 66 with almost no English at all.  They were somewhat befuddled by the maps they were using, so Ron M. and I attempted to show them how to get across Oklahoma.  I'm not sure if we were successful, but they left having purchased t-shirts and with very big smiles on their faces. 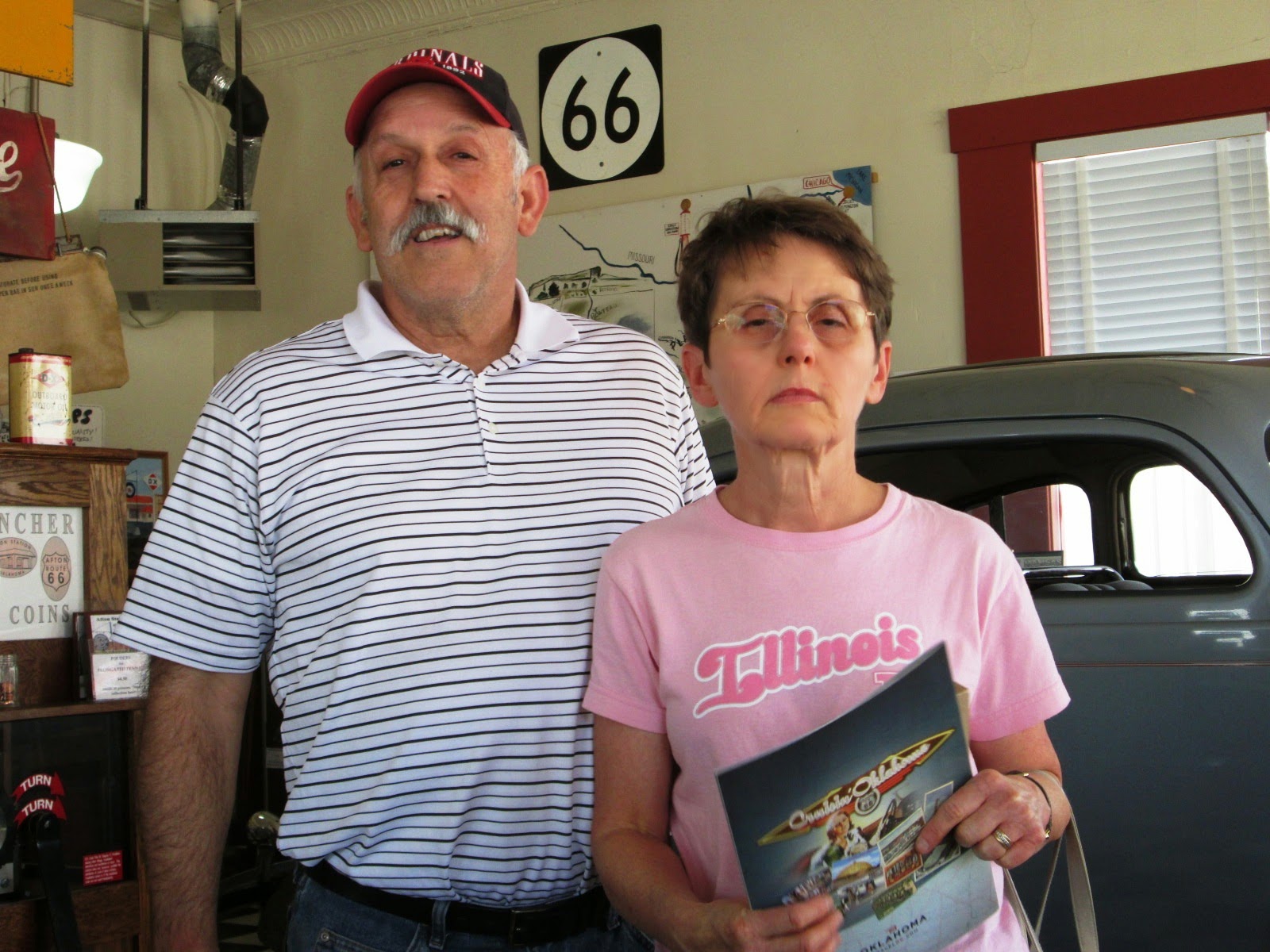 This couple from McAlester, Oklahoma were on a mission to get some pressed pennies for their grandchildren.  The penny machine got a good workout!  They both traveled Route 66 when they were younger and today were reminiscing about former trips.

Other visitors came from Manchester NH, Crossville TN, Loudon TN, Rogers AR, and Detroit MI (got a photo of him, but it came out too blurred to post).  We were very busy and we loved it1 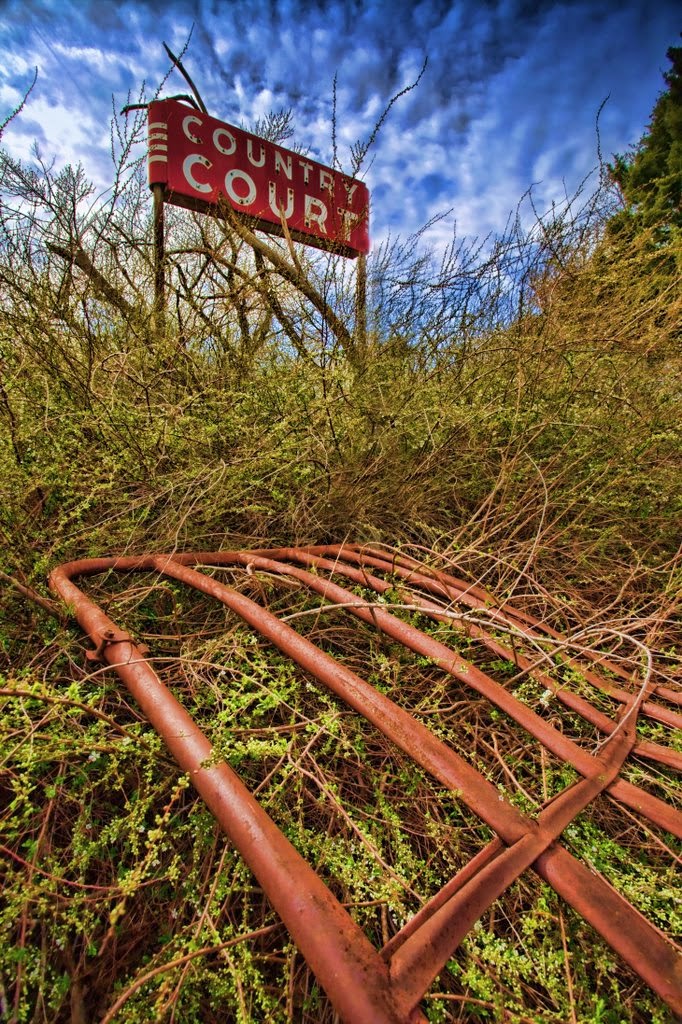 On the way to Afton this morning we passed the site outside of Chelsea where the Country Court Motel greeted visitors for decades.   It closed several years ago, gradually fell into ruins, and the iconic sign remained bright and rust free right up until it disappeared a couple of years ago.   Today we noticed that the site, formerly overrun by weeds and vegetation, is being cleared.  All you can see of the iconic motor court are a few cement pads.  I wonder what will inhabit the site next??? 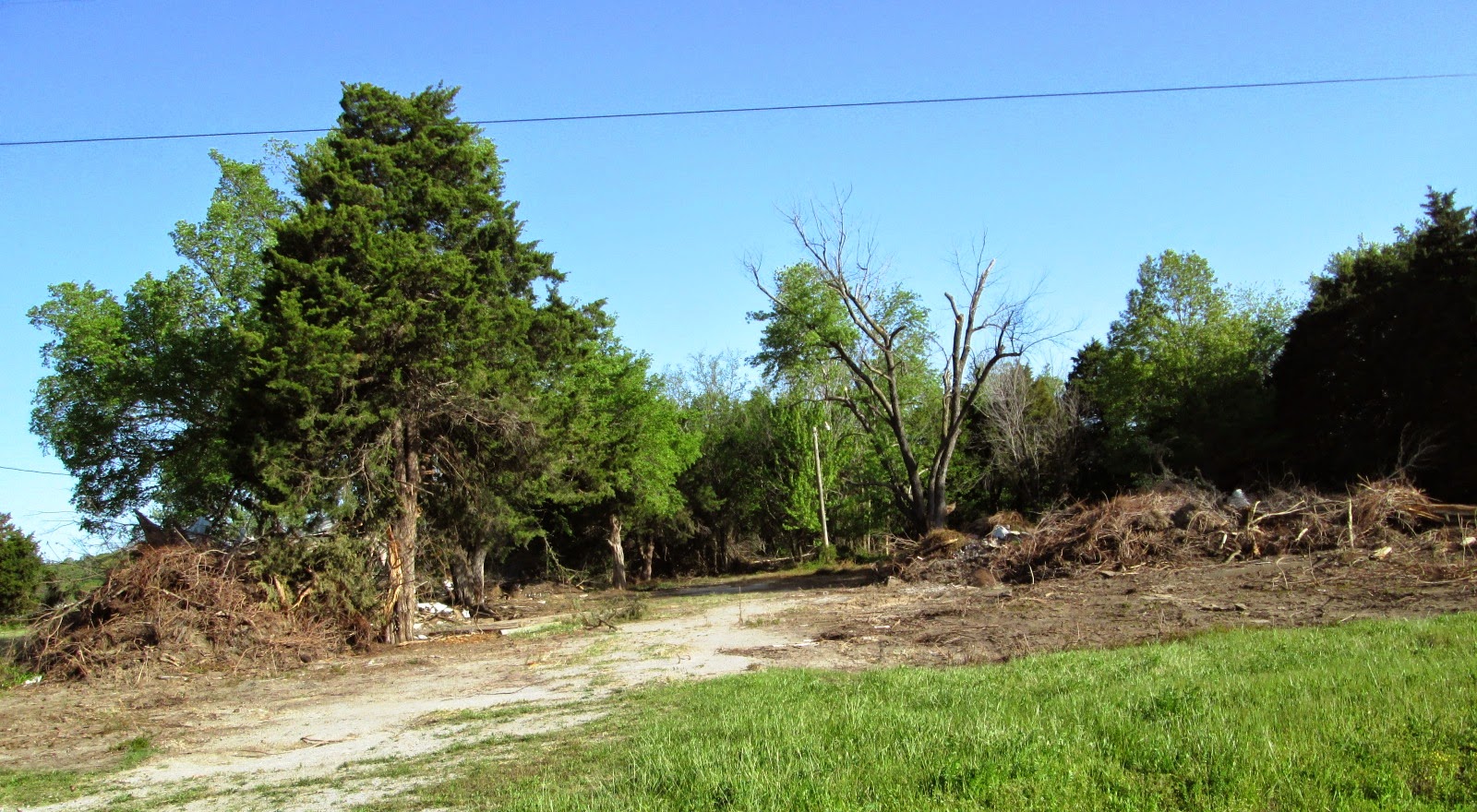