It's All About the People

You hear that a lot on Route 66.  "It's all about the people".  I'll bet some folks don't believe it as they start out on their Route 66 adventure expecting to see interesting, deteriorating buildings, an occasional diner or old motel, a bit of old brick roadbed.   It doesn't take long, however, for them to realize the truth of the Mother Road. . . it really IS all about the people!   What people?   The folks who live along the road.  The folks who work along the road.  The travelers themselves.

That hasn't changed since Michael Wallis emphasized the importance of people several decades ago in his book "Route 66:The Mother Road", the volume which arguable started the resurgence of interest in Route 66 travel.  He described, in his usual colorful way, some of the people who could be met and befriended along the road.  Some of those people are still around.  Many aren't.  There is a new generation of people holding down the friendly reputation of the Road now, all of whom crave the fun of meeting new travelers and helping to educate them on what an incredibly wondrous piece of pavement they have chosen to explore.

I like to think I'm one of the newer generation of Route 66 people.  I was a Route 66 traveler until about 14 years ago when I became one of those business owners along the route who loves what she does because she just plain loves people!   Today the activity at my little museum in Afton, Oklahoma, was a perfect example of what turns me on about my business owner status.

I won't use many words tonight to describe any of the 25 visitors to Afton Station today, except to say they were a very interesting and energizing bunch. Some new friends, some old friends.  The perfect mix.   For example: 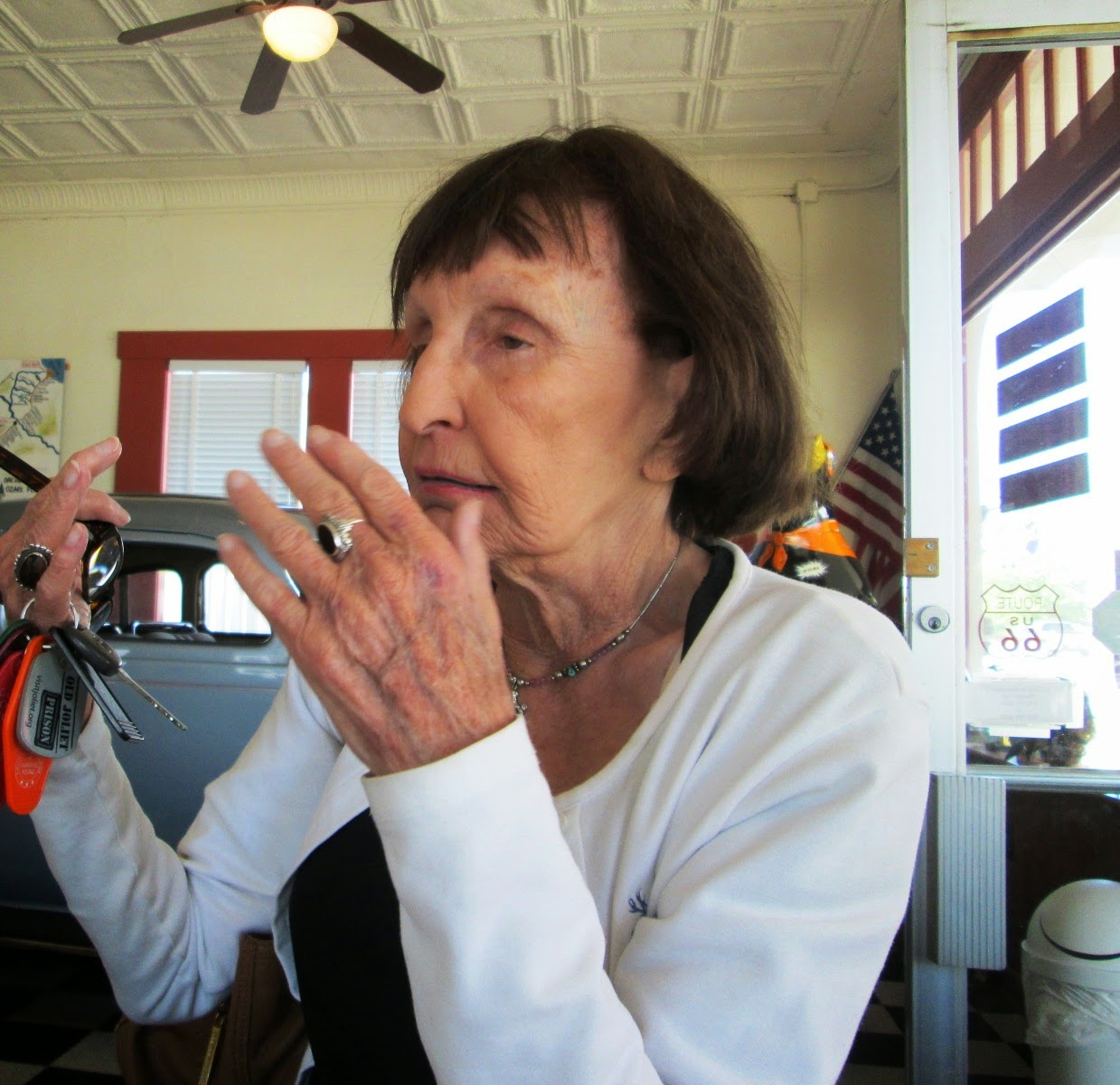 . . . the at least yearly visit from one of the sweetest people of Route 66, Jane Dippel of St. Louis.  She's been around from the start, and her visit always leaves me with a big smile on my face.  (Sorry, Jane, for the awful photo.  I caught you in a bad pose, but those who know  you know how beautiful you really are.) 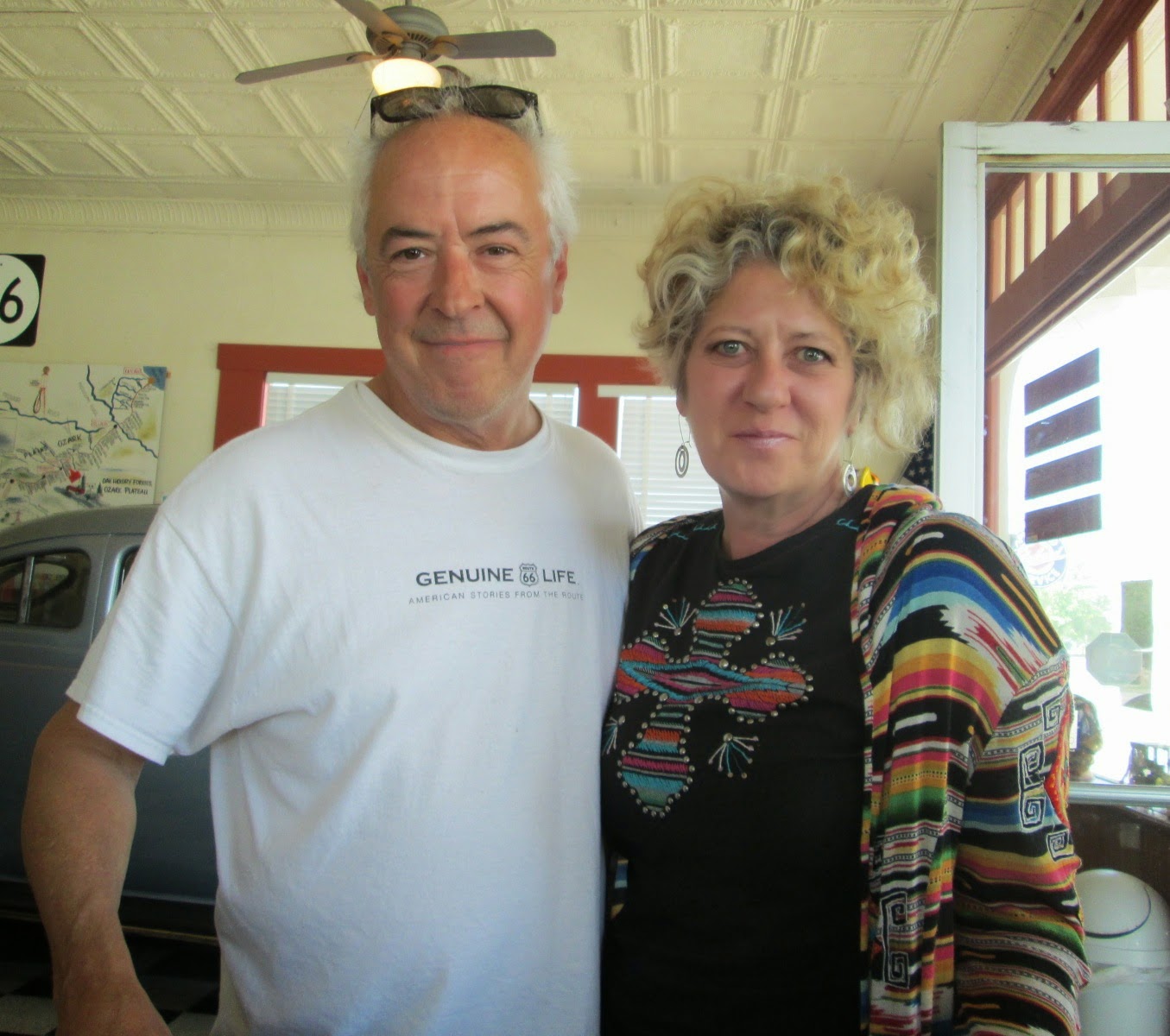 K. C. Keefer and Nancy Barlow, who dropped in for a chat on one of the final legs of their trip home to Denver.  They spend countless hours interviewing and filming the people of 66.  Their traveling companion Spencer Perro wouldn't hold still for a proper photo but was a polite pup as usual. 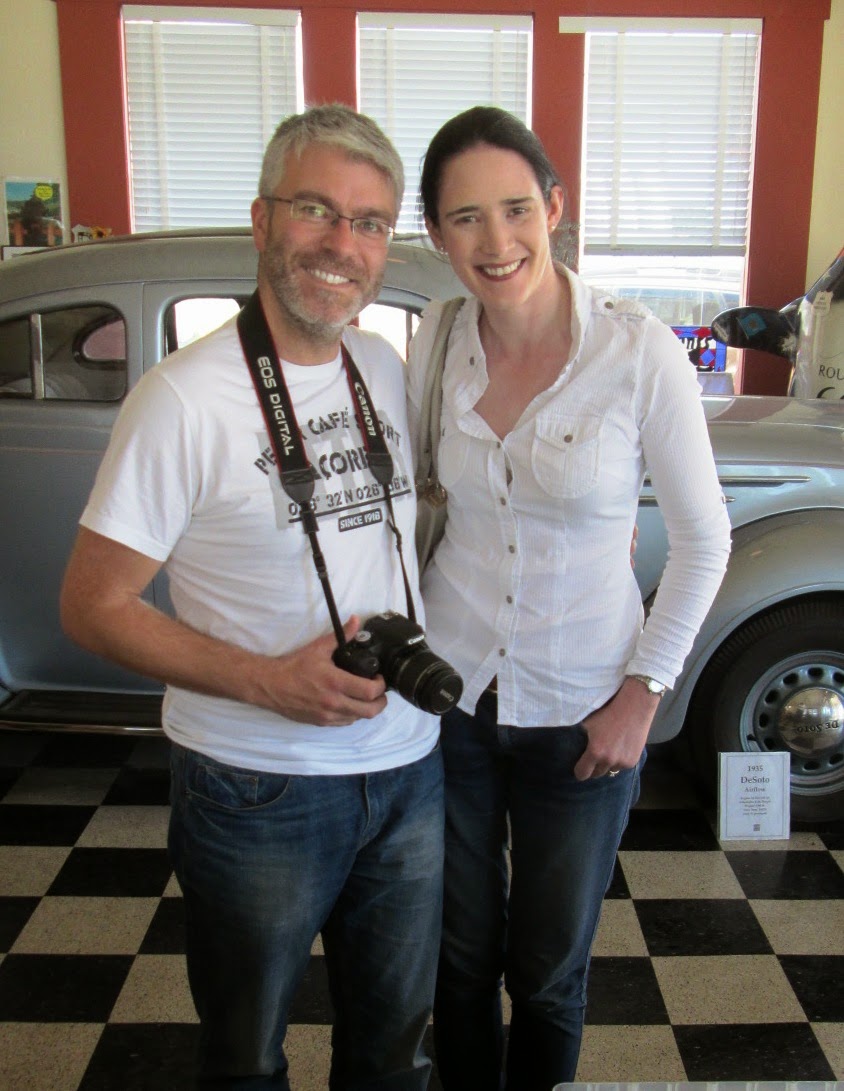 The honeymooners du jour were this couple from Great Britain.  She is from Ireland, but when they get home from Route 66 they will make their home in England.    They have been married less than a week.  Feel the love! 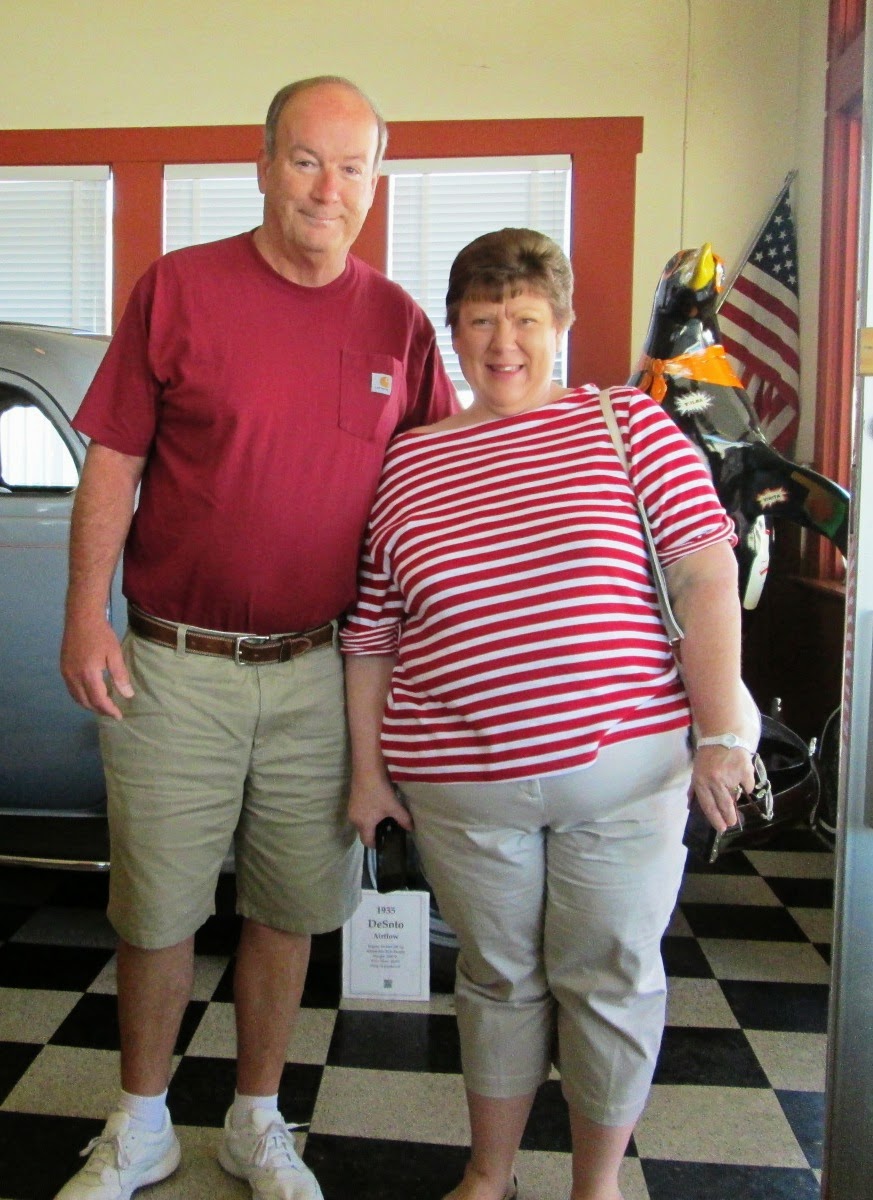 This couple from Dayton,Ohio is familiar with the wonderful Packard museum in that city, thus enjoyed seeing our smaller but nice collection. The first perfectly gorgeous day brought out a good number of bikers.  These Belgian riders were certainly having a great time.  They come from the town of Boom! 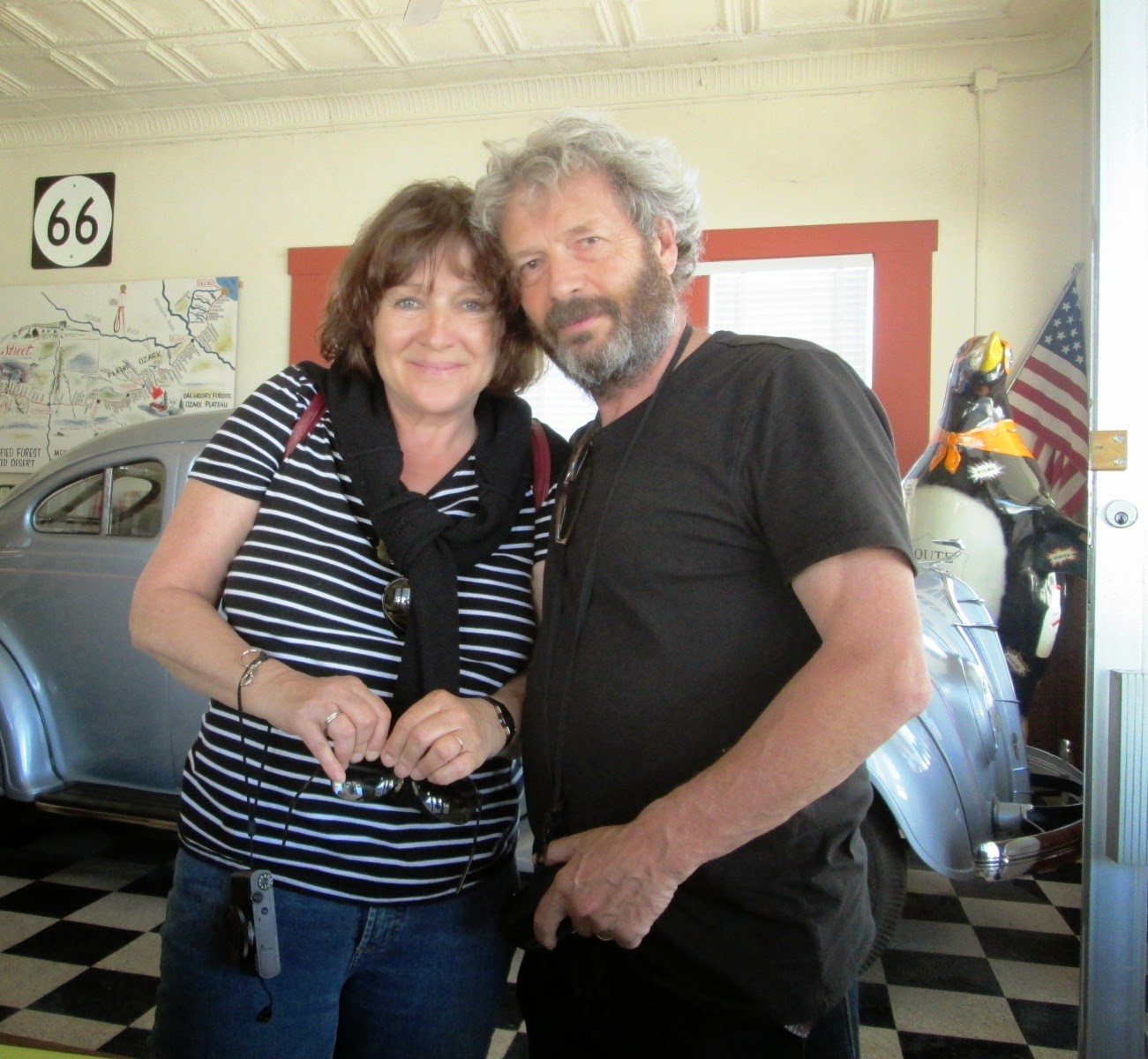 These folks are from Den Haag, Netherlands.  He spent some time in New York City in the past, so he spoke perfect English.   They are finishing up one of the segments of 66 which they have missed on previous visits. 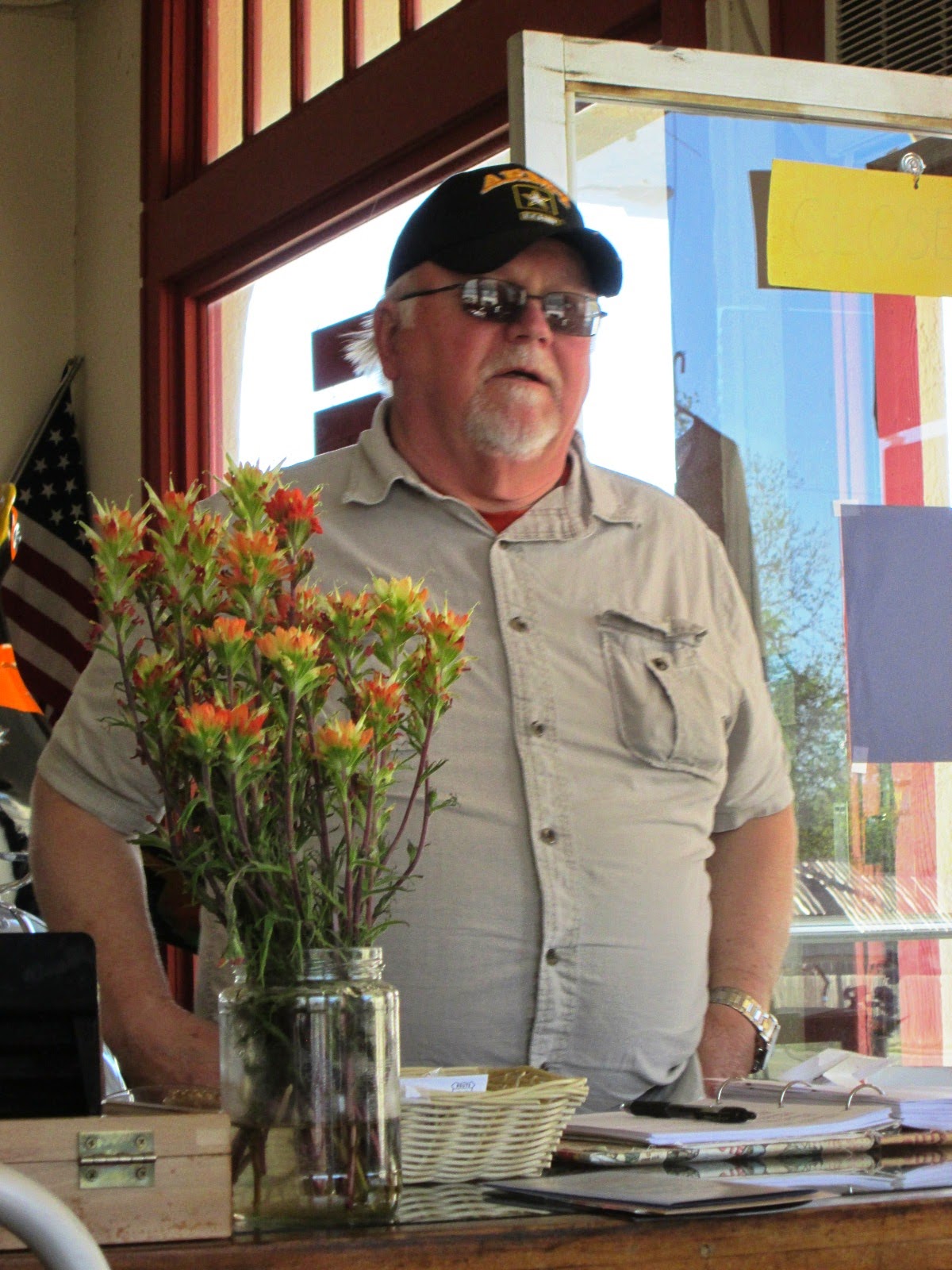 From Holt's Summit, MO came this gentleman.  And that's not all. . .

We also had visitors from N. Mankato MN, Jenks OK (bikers), Kosciusko MS, West Chester OH, Roland OK, and Fayetteville AR.   Tattoo Man stopped for a while too, but left around noon to attend a tattoo convention in Tulsa.  Just goes to show what a sunny, balmy day will do
Posted by Laurel at 6:06 PM

Travel season is in full swing, so I know you are happy.