A much appreciated gentle rain fell on parts of Oklahoma Route 66 this morning.  Ron M. and I drove through it, off and on, but the sun eventually came out for a while once we got to Afton.  We weren't overwhelmed by visitors, but we had enough to put us over the top on numbers of visitors for any months of  July, and second best for all months since we've been open.   It sure feels good to know that our visitor count continues to increase, which of course also indicates that over all,  travel on Route 66 is increasing, too.  Good news for the Mother Road!

Those three handsome Frenchmen who went to the baseball game with us on Tuesday came to visit Afton Station this morning to pick up some souvenirs before heading back to their homeland tomorrow.  Coincidentally, a solo traveler from Evian, France arrived at the same time.   David's wife Sylvie (also French) was there as well, so their native language chatter was mostly beyond my ability to comprehend, but they did thank us on their way out. 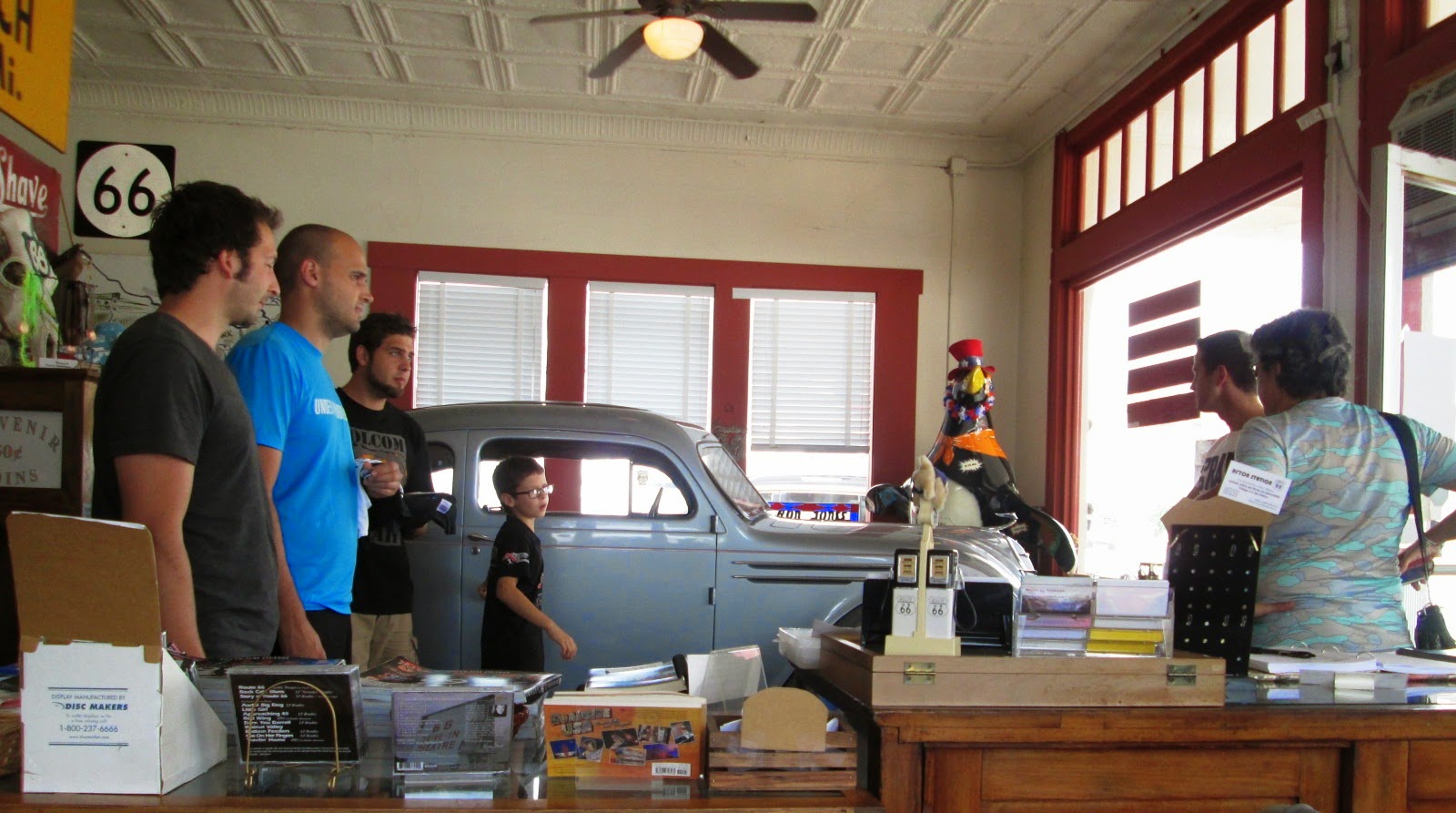 Three French guys on the left (with Sylvie's son Patrick), Sylvie and solo Frenchman on right.  Much chatting ensued. 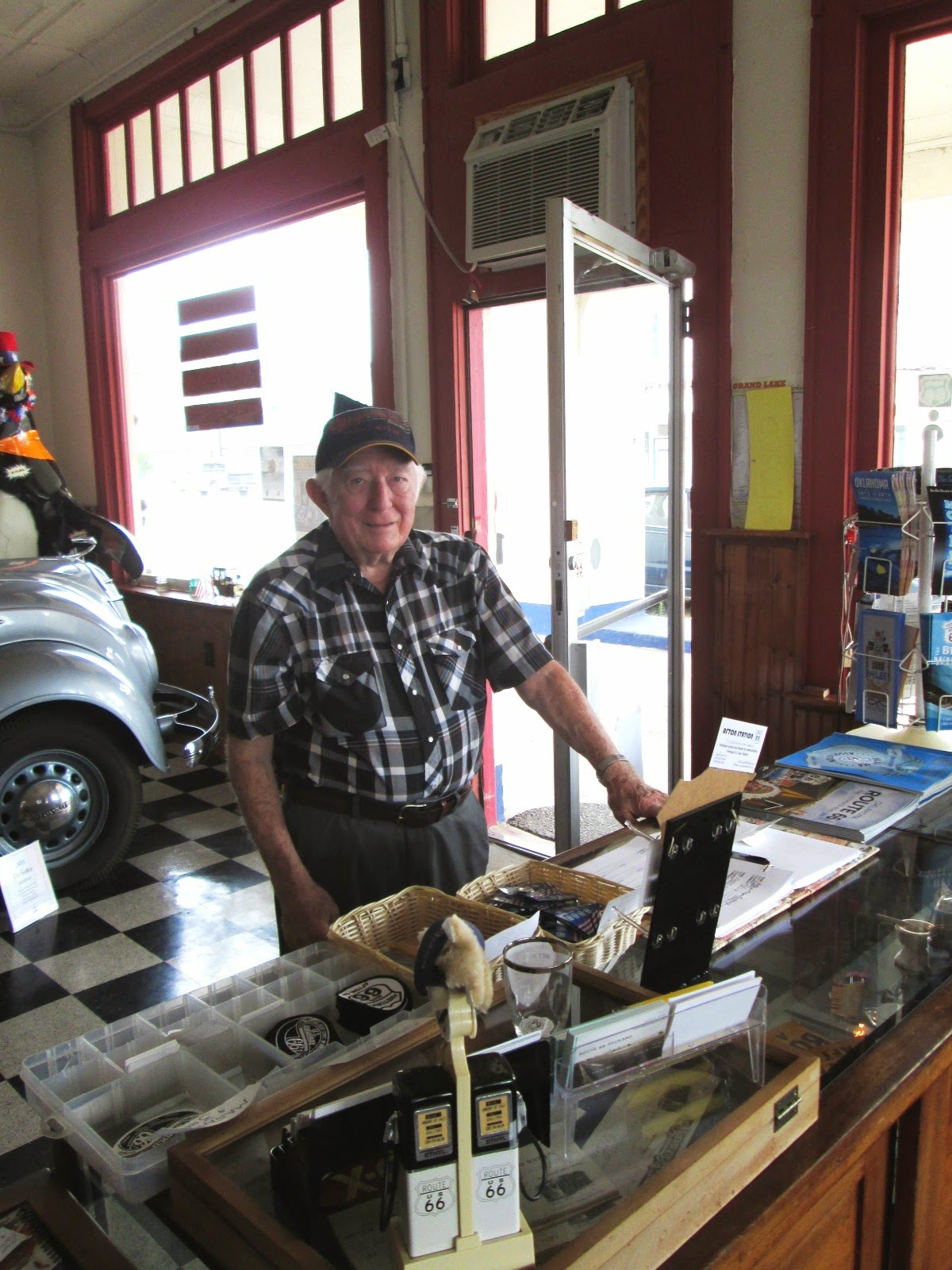 I'm sure that this gentleman is the first player piano builder we've ever hosted.  He has  had a business for many years in which he builds and repairs player pianos and converts regular pianos to players.  Interesting!  He's from Bernice, OK and arrived with a friend.  He is very fond of Packards.

Other visitors came from Chicago IL, Abergavenny Wales, and a local born-and-raised Aftonite who had not been in our building since it was a gas station back in the early '80s.

We now have a very large selection of new postcards, as I now have two big racks of them and acquired more from a business in Claremore which is closing its doors.  We also still have a pretty good selection of older postcards from Route 66, all states, and even some foreign ones. Come and get 'em! 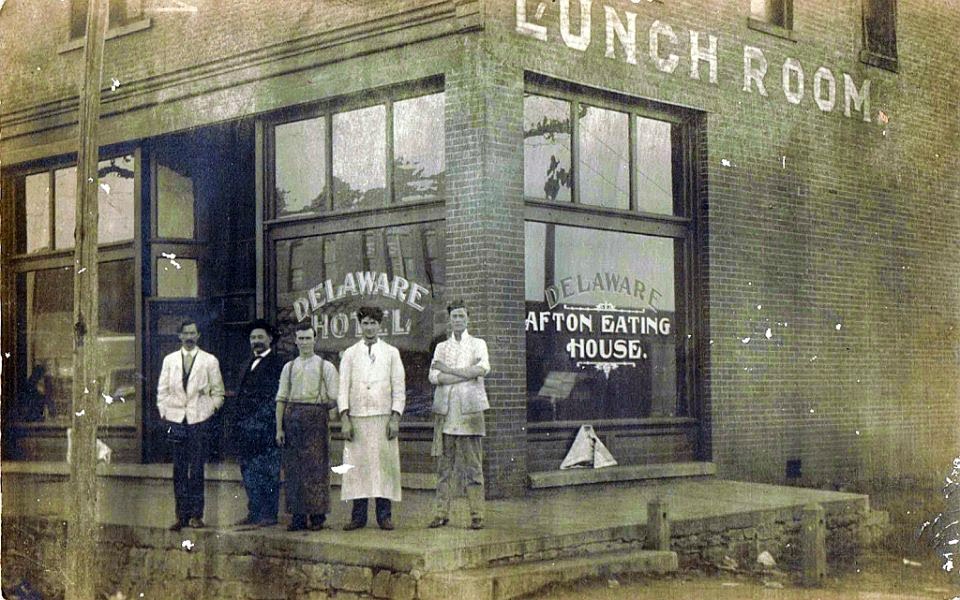 This great image just came to my attention recently.  It's the Delaware Hotel and Afton Eating House. Wish I had more information about it.  I don't know where the hotel was located or when it ceased to exist.  Betty, who knows so much about the history of the town, doesn't know either.  It's such a wonderful photo!
Posted by Laurel at 5:20 PM