Out on the Town

On Sunday, Ron McCoy picked me up and took me for a much-appreciated and much-needed outing, coming just prior to the point at which I was contemplating climbing out the window and making a getaway from this rehab place all by myself.  Again, I must say that I really have few complaints about this very nice facility or the wonderful therapists who are working with me, but the roadies among you will understand my extreme need to get out, get in a car, and GO SOMEWHERE!

So despite the rainy, gloomy day I was more than ready for a short road trip, and of course I wanted most of that drive to be on Route 66.  I had just heard that the Tulsa Goodwill Retail Store had finished a new building on Southwest Blvd. (Route 66) and I had seen a photo of the sign they had put up in front of the building.  I was astounded that Goodwill would be so aware of Route 66's importance to the community that they would erect a sign that honored that history, so I wanted to see it for myself.   Indeed, it's wonderful, even in the rain!  A very cool example of googie signage which even includes a Route 66 shield! 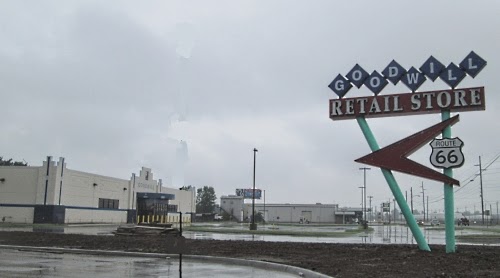 The architecture of the building itself honors the Deco heritage of Tulsa and seems appropriate right across the street from one of our larger oil tank fields, another important part of the history of the city.  Good job, Goodwill! 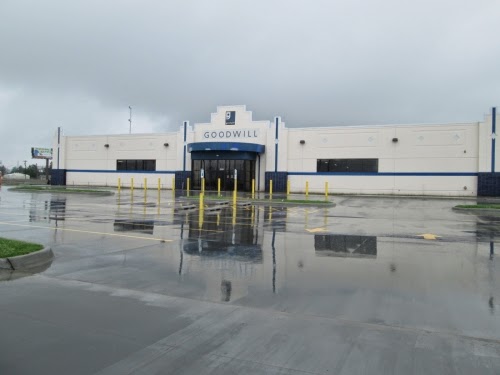 Some banners appear on poles in the Red Fork neighborhood of West Tulsa so we stopped to snap a pic of one of them. 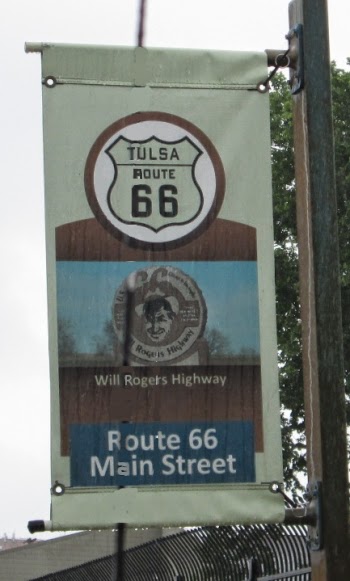 From there, we drove downtown, specifically to the Brady Arts District, where we just cruised around the  wet, virtually empty Sunday morning streets and marveled at the growth of that area since 2004 when, to much public skepticism, we chose it as the venue for our International Tulsa Route 66 Festival.  We still feel we were pioneers in recognizing that rundown part of town as having a lot of promise for the future.  Now, just 10 years later, Brady has become known for it's art galleries, trendy bars, restaurants, green spaces, and new apartments and condos!

We finished our outing by driving to my house. I hadn't stepped foot in for almost a month.  It was so good to be home, even if only for about an hour.  I "practiced" getting around, since it won't do me much good to go home too soon if I can't negotiate my own house.  I did very well, although I think I need a little more therapy before I'm totally comfortable going home by myself.   I picked up some accumulated mail,  listened to my phone messages, and gathered a few items I needed to take back to rehab, and made sure that all security measures were working well.

It was a wonderful day and just what I needed to put me in a great mood.  Thank you, Ron, for giving me the opportunity to breathe fresh air, feel a few raindrops on my head, and mostly return to a little bit of Route 66.
Posted by Laurel at 6:44 AM

Definitely "proof of progress". That Ron sure is a treasure.

I don't know what I'd do without Ron, since my only family is my daughter in Chicago. He's become family to me. He even does my laundry while I'm in here. Truly above and beyond the call of duty!