Veering off the Road 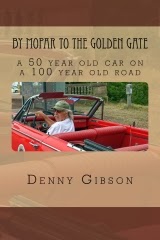 I feel certain there will be no objections if,  in winter when very few folks are traveling Route 66, I veer off that road for a moment and on to another iconic cross country byway , namely the Lincoln Highway.  I know there are quite a few Route 66 fans who also drive and appreciate other historic roads, and I have something wonderful to introduce to those who have driven (or hope to drive) the Lincoln Highway at some point in their lives.

You may recall that a few weeks ago I mentioned helping a friend by proofreading his manuscript, and today I can announce that it has been published and I am in possession of a finished copy!    BY MOPAR TO THE GOLDEN GATE is Denny Gibson's account of his New York to San Francisco trip in his 50-year-old Plymouth Valiant during the 100th Anniversary of the Lincoln Highway in the summer of 2013.  And since he returned from his trip via (mostly) Route 66, there's plenty for Mother Road folks to appreciate, too. 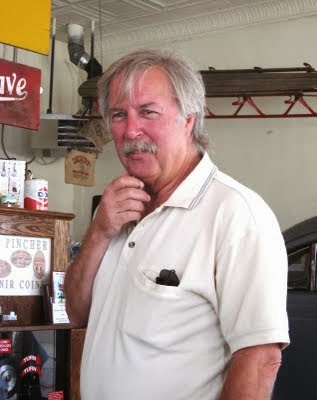 That it is very well-written will be no surprise to anyone who reads Denny's accounts of other road trips which he periodically posts on his blog, dennygibson.com.   He doesn't miss a detail when describing what he sees along the way, the people he meets, and what challenges he experiences when it comes to driving a vintage automobile for a great distance.  As a bonus, there are well over 150 photos taken along the way.

You will be pleased to know that the volume is now available to everyone at Amazon http://tinyurl.com/k3pjn6k.  Even if I hadn't proofread it for Denny, I still would have been one of the first in line to purchase this fine journal, a bargain at $9.  I suggest you do the same.

I too have a copy of Denny's book and it has been placed in the queue of books that I have bought and have not yet had the time to read. So many books, so little time.

The neat thing about proofreading this book is that I've already read it! I'll be reading it again, of course. It's a whole different feeling when it's actually in your hands. And I can attest -- it's good!

There are lots of other historical highways I like. The Jefferson Highway runs through eastern OK.
http://www.jeffersonhighway.org/jha-home/#