I came by my appreciation of Woody Guthrie in a number of roundabout ways.  I've always loved the song "This Land Is Your Land", but when I was a kid I had never particularly attached it to a specific songwriter.  Then, as a young adult, I became completely infatuated with Woody's son Arlo, an infatuation that bordered on hero worship.  I attended quite a few Arlo concerts, and traveled several times to Stockbridge in the Berkshires of Massachusetts to visit the church in which Arlo lived for a while and which was a main feature of his well-known song (and the movie) "Alice's Restaurant".  Through his son, I eventually and gradually developed a greater awareness of Woody himself.  Since then, I've read a number of books both about and by Woody, and made a visit to the new Woody Guthrie Museum in Tulsa very soon after it opened its doors this summer..

It seemed only right, then, to visit the birthplace and boyhood home of Guthrie, which isn't too far from Tulsa.  The town is Okemah Oklahoma,  and there's not a moment of doubt that the folks in the town are utterly devoted to their native son.   Woody was known as a Dust Bowl writer and singer, and Okemah has a strong connection to the Dust Bowl itself.   So Ron M. and I made a last-minute decision to visit Okemah during the day-long road trip I described in yesterday's blog. 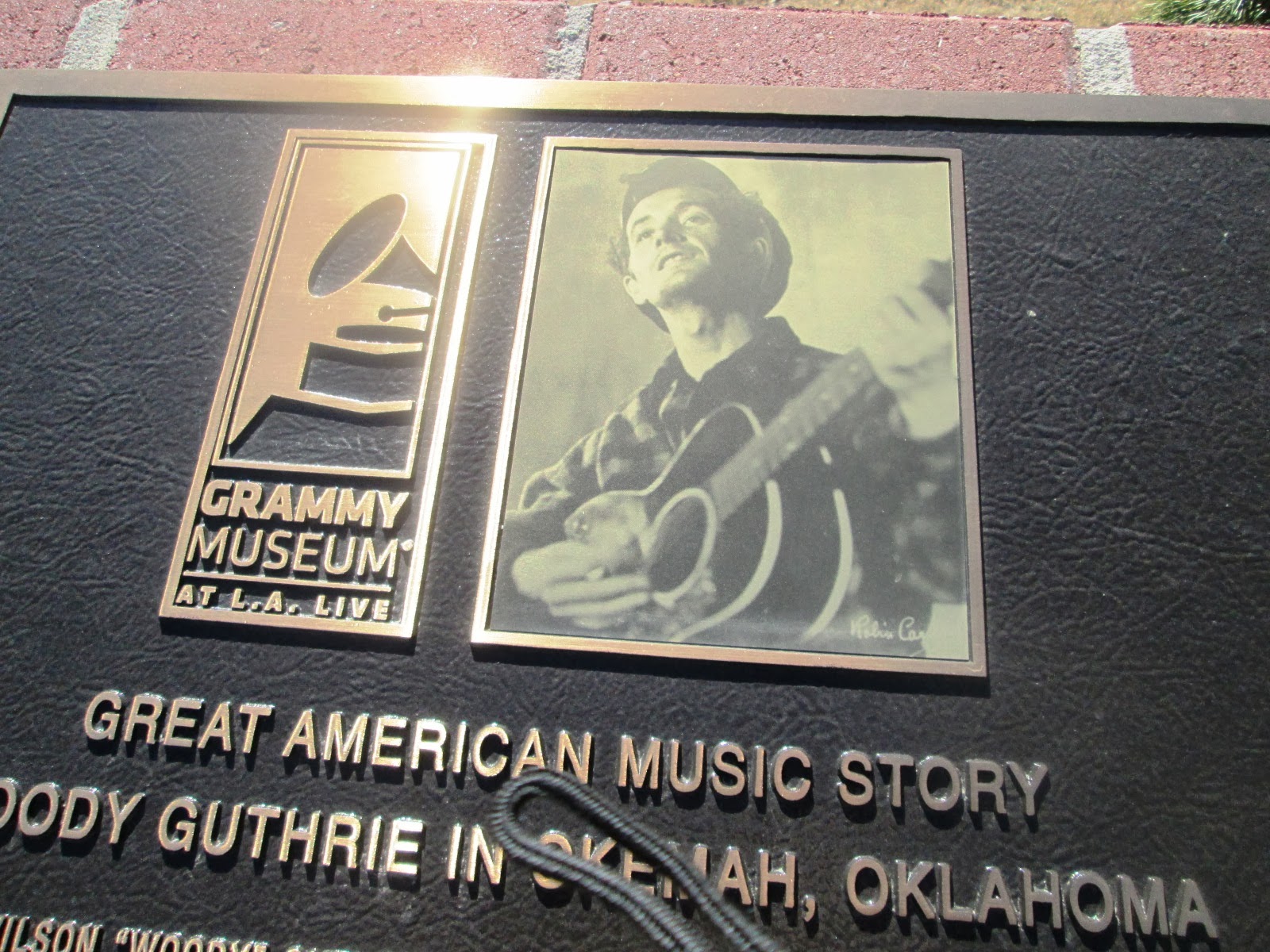 There is a small park in the center of town which honors their favorite son.   Murals on the sides of two buildings depict Woody and his influence on American culture. 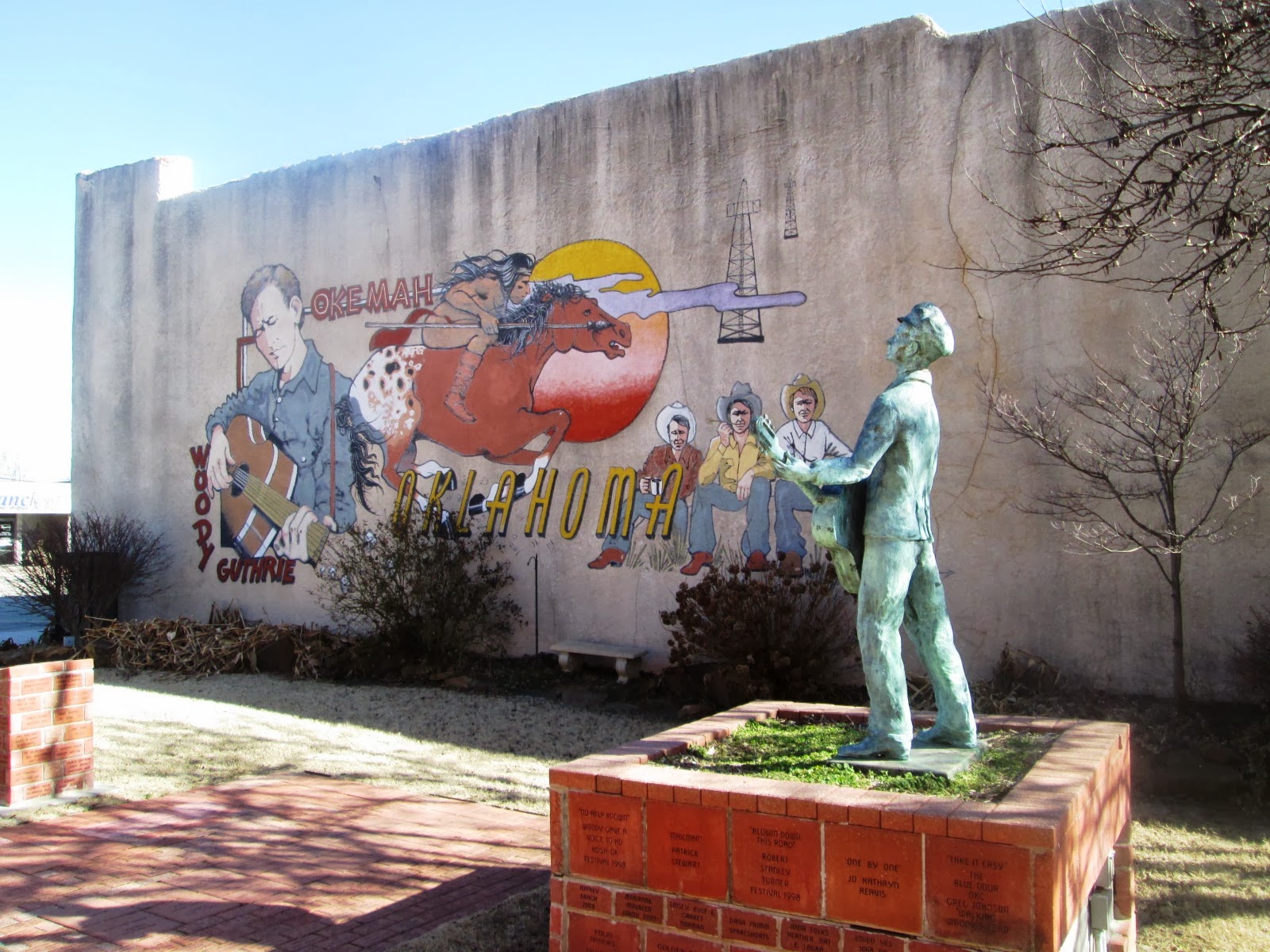 One of the murals mentions the Woody Guthrie Folk Festival which has been held every July for a couple of decades and is attended by many thousands of music fans. 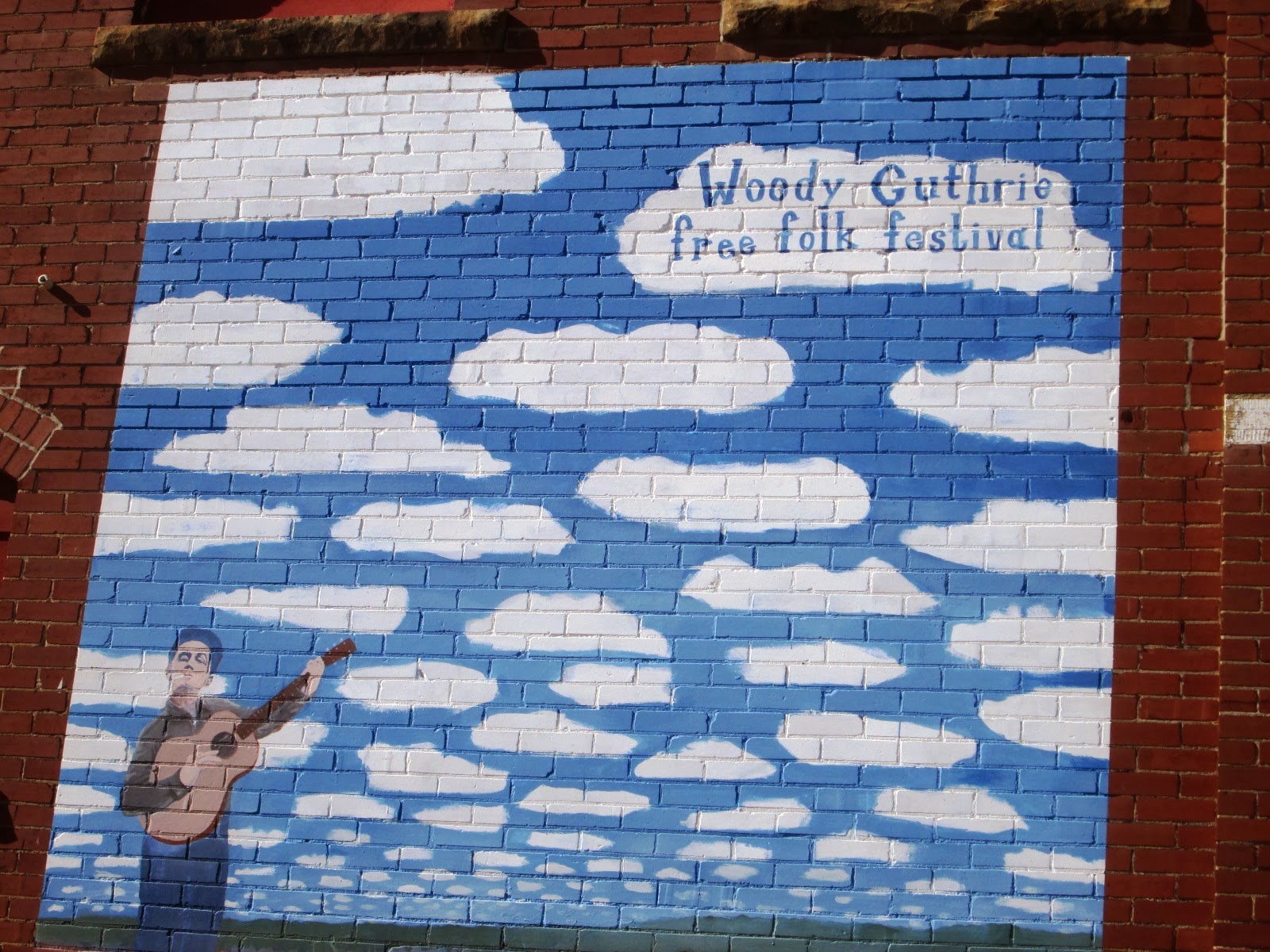 The fine bronze statue of Woody is the focal point of the park. 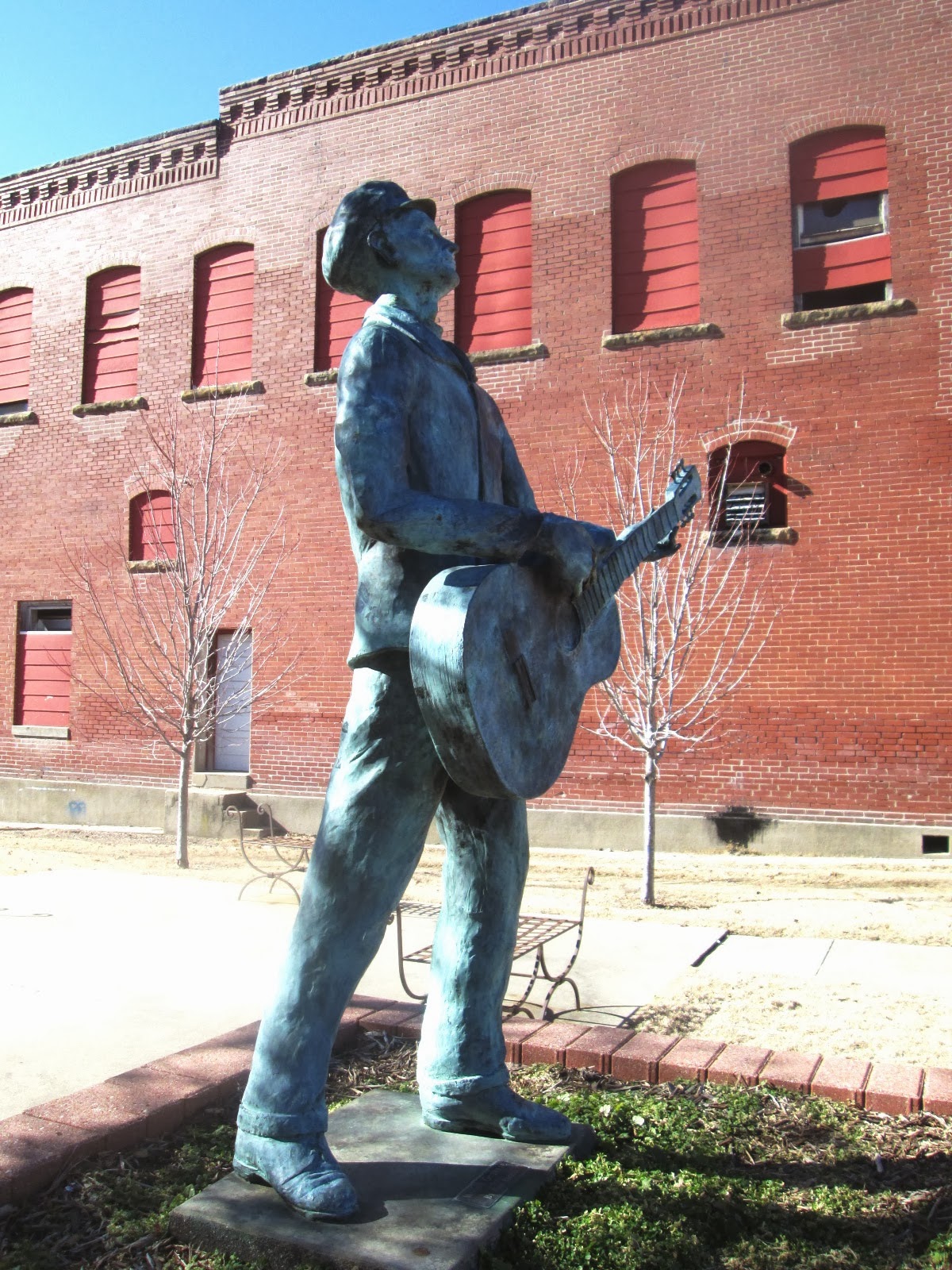 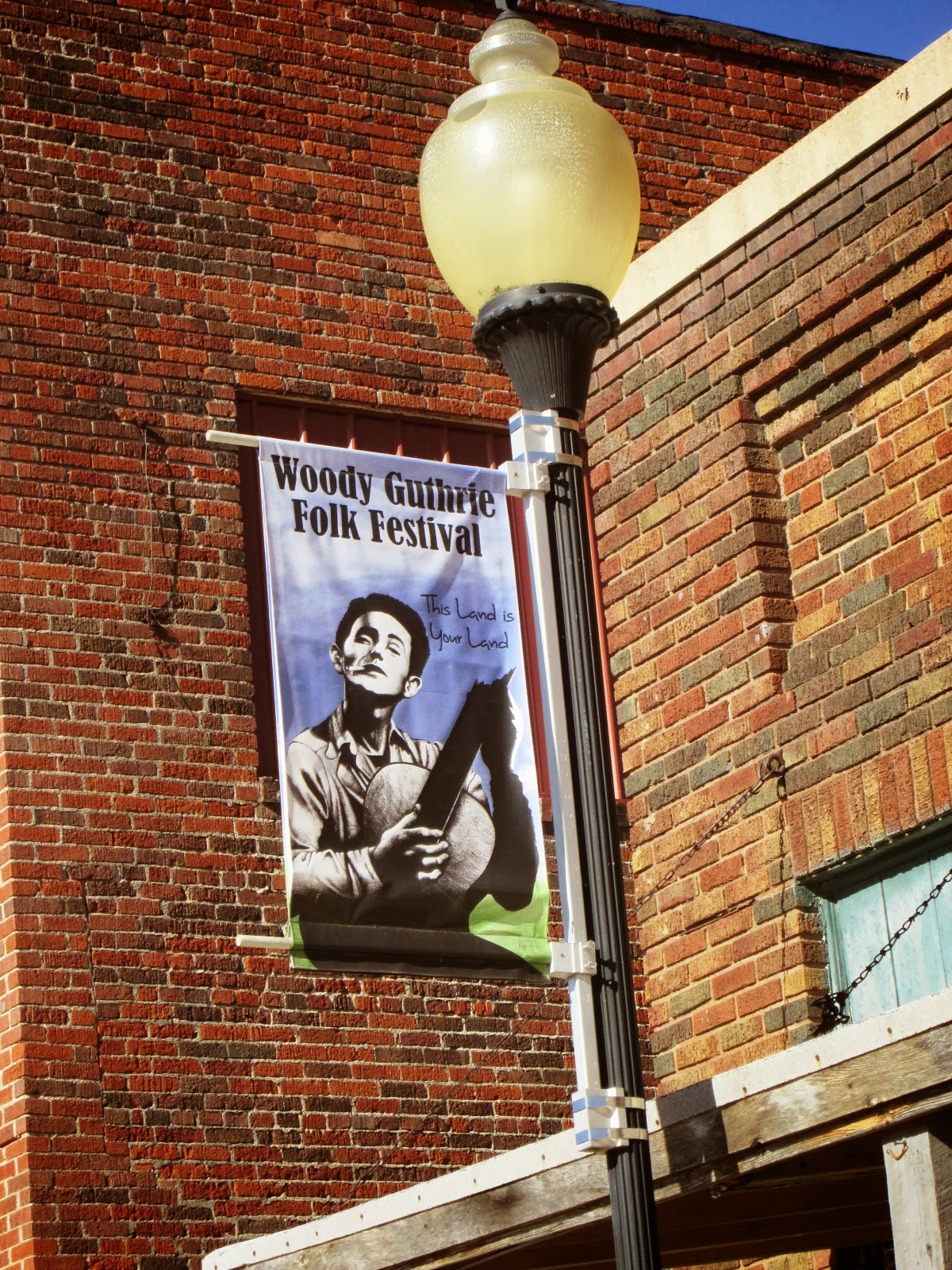 . . . and this carved tree stands at the site of Woody's actual birthplace. 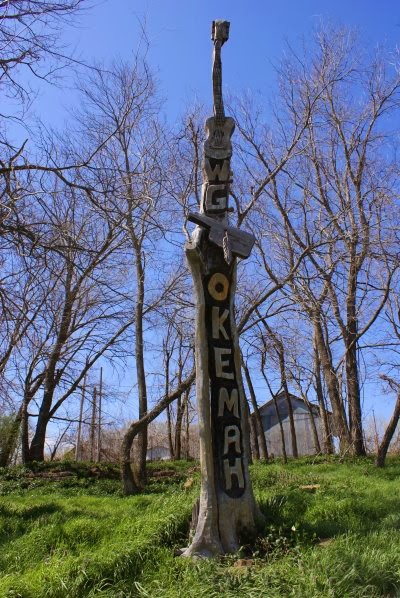 The house of his birth was razed a while back, but the boards, bricks, and stones were saved and will be used in the reconstruction on the hill beyond the carved tree,due to begin very soon.  The house will be identical to the home in which the Guthrie family lived, and on the exact spot.   This shoud be an interesting addition to the already extraordinary town-wide memorial to their beloved son.

There is more to see in Okemah, which has done a good job of preservation of many buildings.  Here, for example is a ghost sign on the side of a building downtown.  There is also a vintage theater with a spectacular marquee (sorry, that photo didn't come out well), and some lovely old Victorian homes scattered around town. 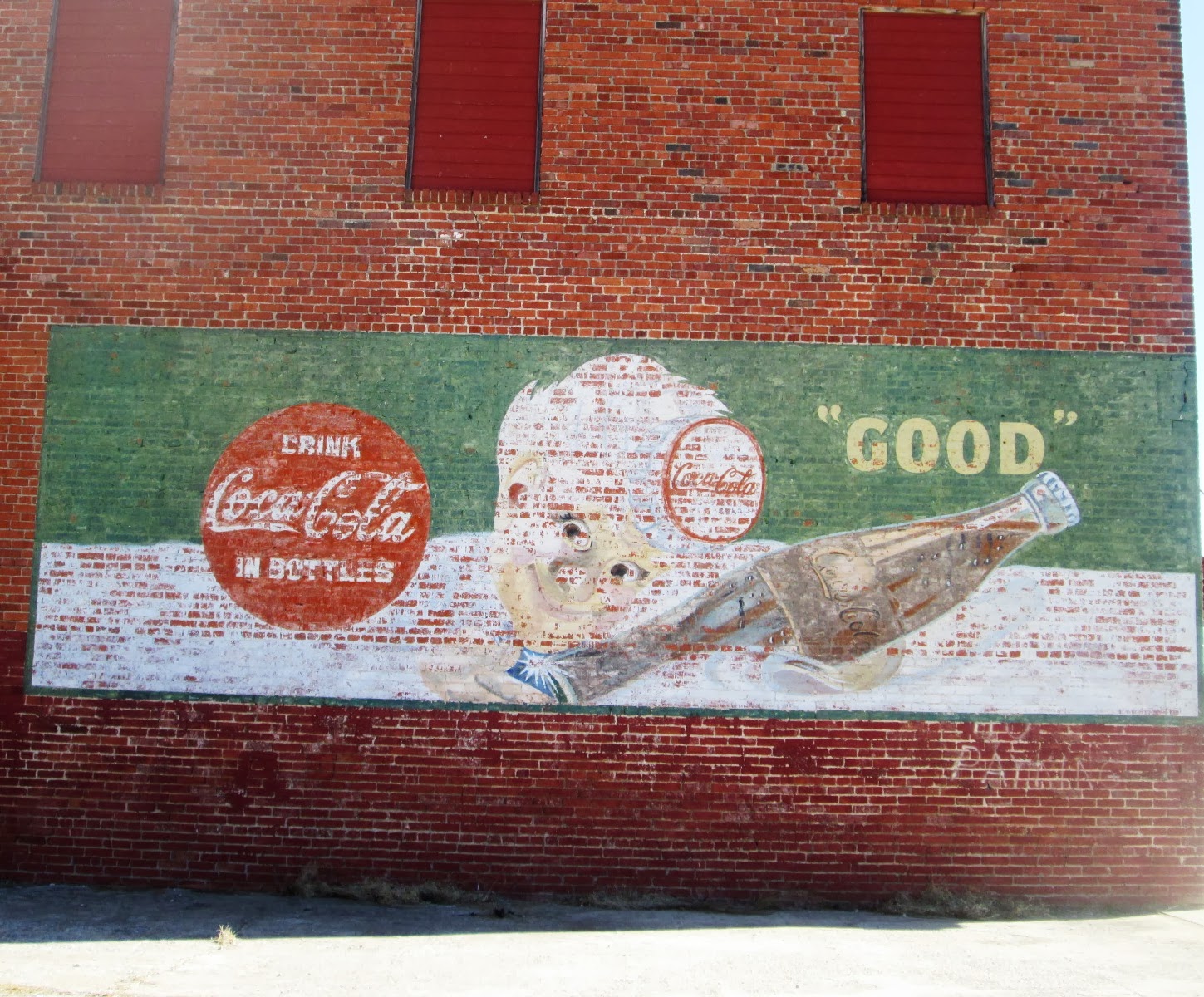 Every year Okemah has a rattlesnake roundup. I've wanted to go see that. But, alas, I never made it there yet.