Roadies are practically required to take advantage of days like today.   The temperature -- in January, no less -- is in the 60s, the sun is shining, and the road is calling.

Ron M. and I decided to do a little exploring of some back roads, a little bit on Route 66 but mostly not.  Everywhere we went was within about 30-50 miles of Route 66, so Mother Road travelers might want to keep these attractions in mind for side trips.  Here's what we did:

I had read about an Indian burial ground in Sand Springs (near Tulsa) which had been virtually swallowed up by creeping civilization, and which now stood, fenced, in the parking lot of a shopping center. Here's what the Roadside America website has to say about it:

The Tullahassee Creek Indian Cemetery opened for business in 1883 and received its last body in 1912.
Sixty years later, peace was broken by the rumble of bulldozers and the smell of asphalt; progress had arrived! Keystone Plaza (now known as Atwoods Plaza) went up next door and covers nine acres, with its eponymous clothing-and-hardware anchor store, a Radio Shack, a Family Dollar, and other touchstones of civilization. The parking lot encircles and dwarfs the tiny Cemetery, which lies toward the outer rim, surrounded by subprime spaces.

In late 2006 Atwoods Plaza was sold to a group of California investors for $3 million. We hoped that they might have a dark sense of humor and bring a Halloween store into the strip mall, but thus far no such luck.The burial ground is also adjacent to a satellite business, "Torchies," a local bar. A sign on its door reads: "No drugs, No gang colors, No bad manners."

Here are a couple of photos which illustrate what those poor Native American souls have to look at now that civilization has overrun their land.  I couldn't help imagining how lovely the plot must have been when it looked out at the surrounding rolling land unobstructed by ugly suburban sprawl. 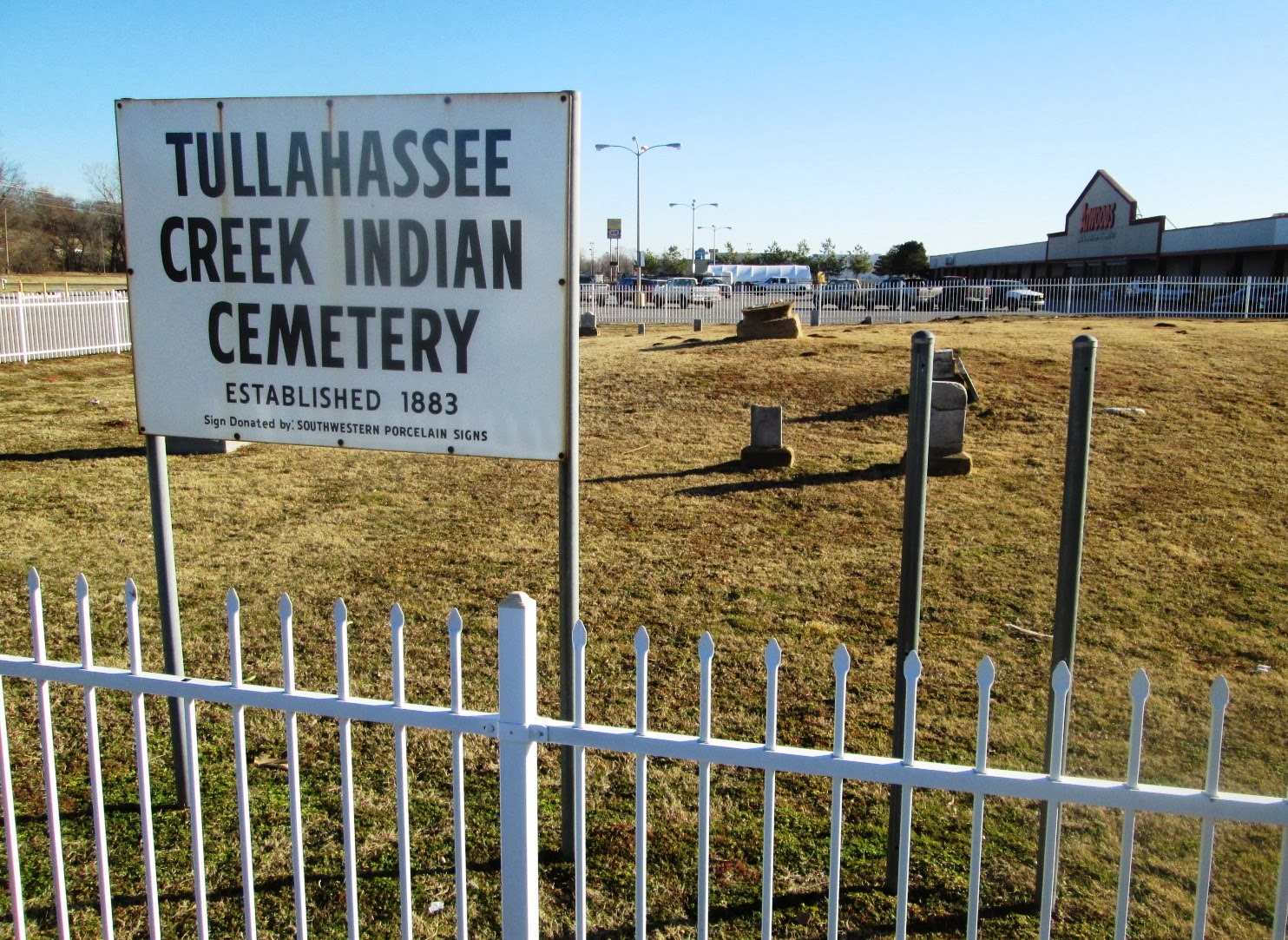 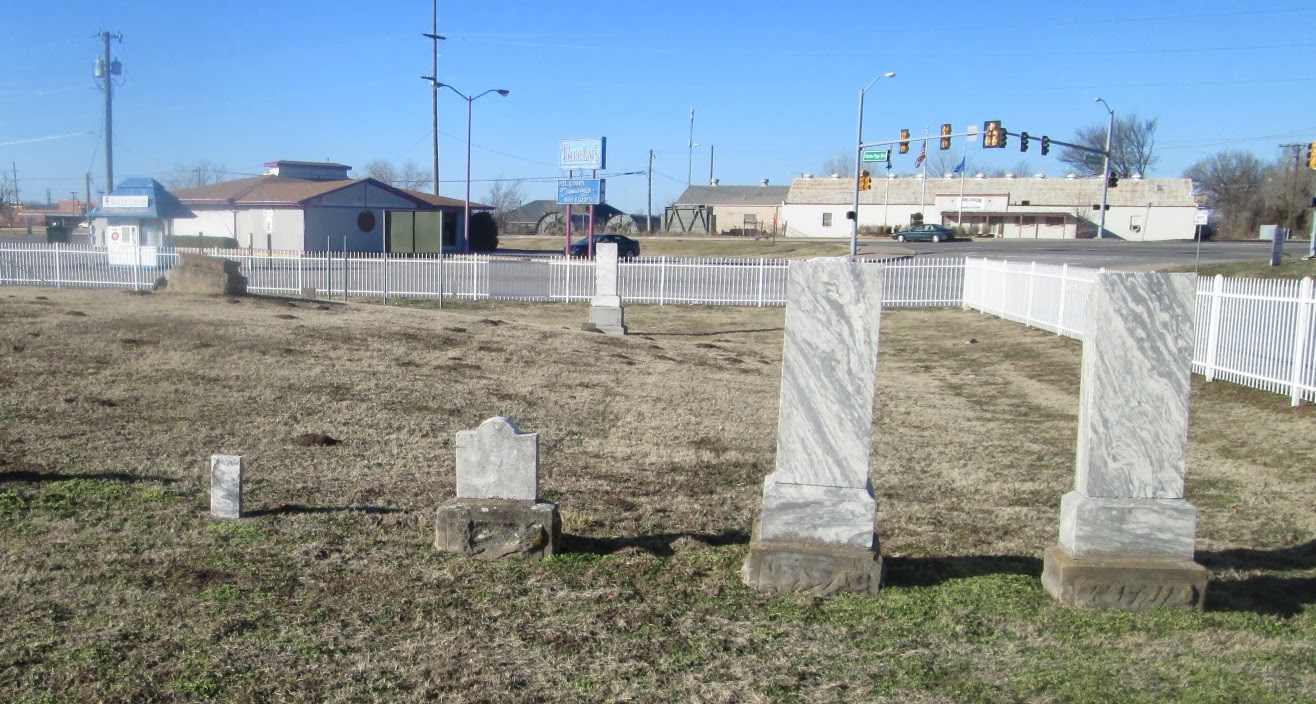 From there, we took a bit of old Route 66 to Bristow, hesitating briefly in Kellyville to take a short ride on the old Portland cement alignment. There's very little that's more fulfilling to a Route 66 fanatic than feeling the tires clump, clump over the expansion joints in an old concrete roadbed. 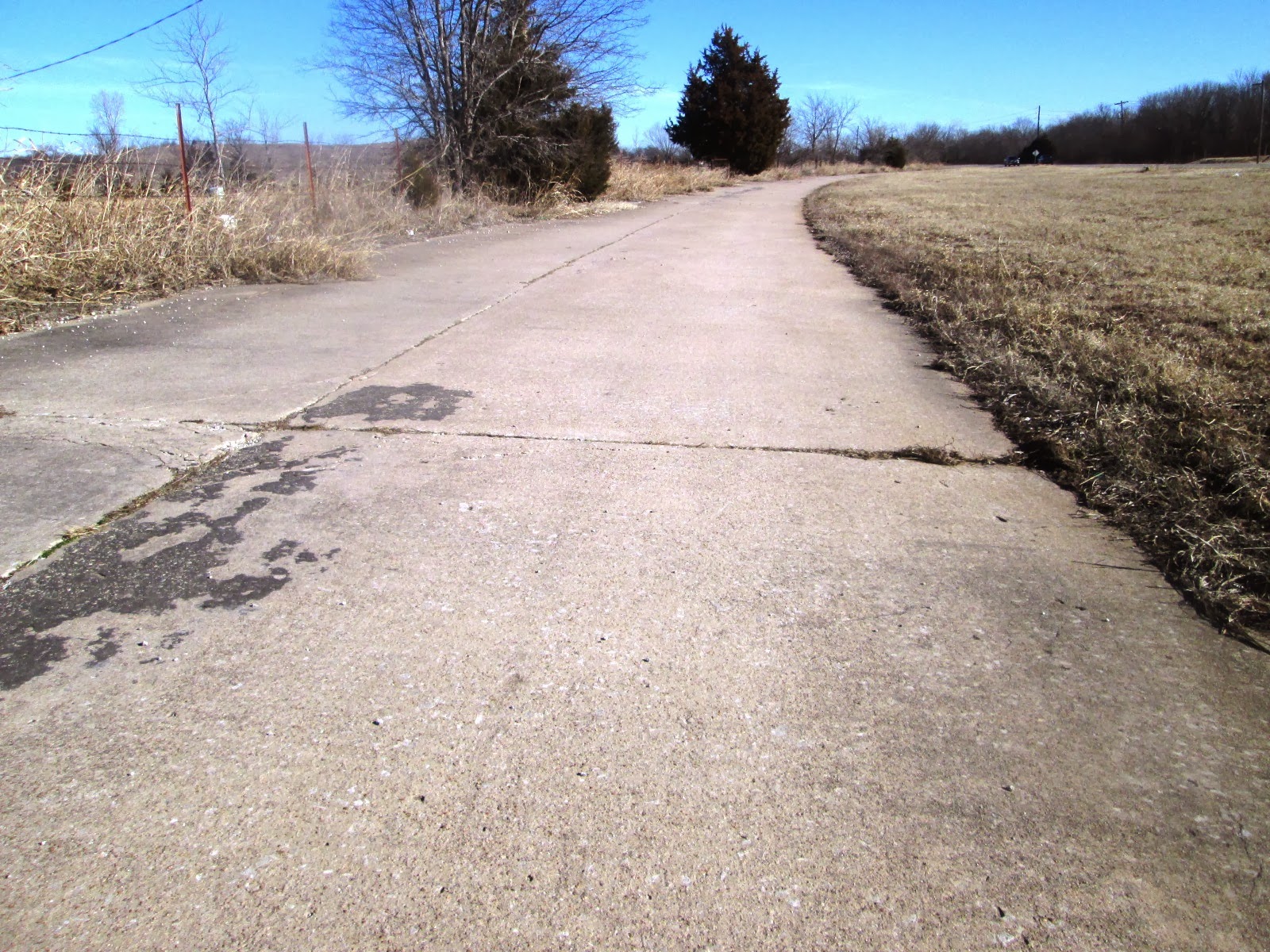 In looking around Kellyville itself, I liked this old feed store sign as well as the enamel pots hanging on the wall below it. 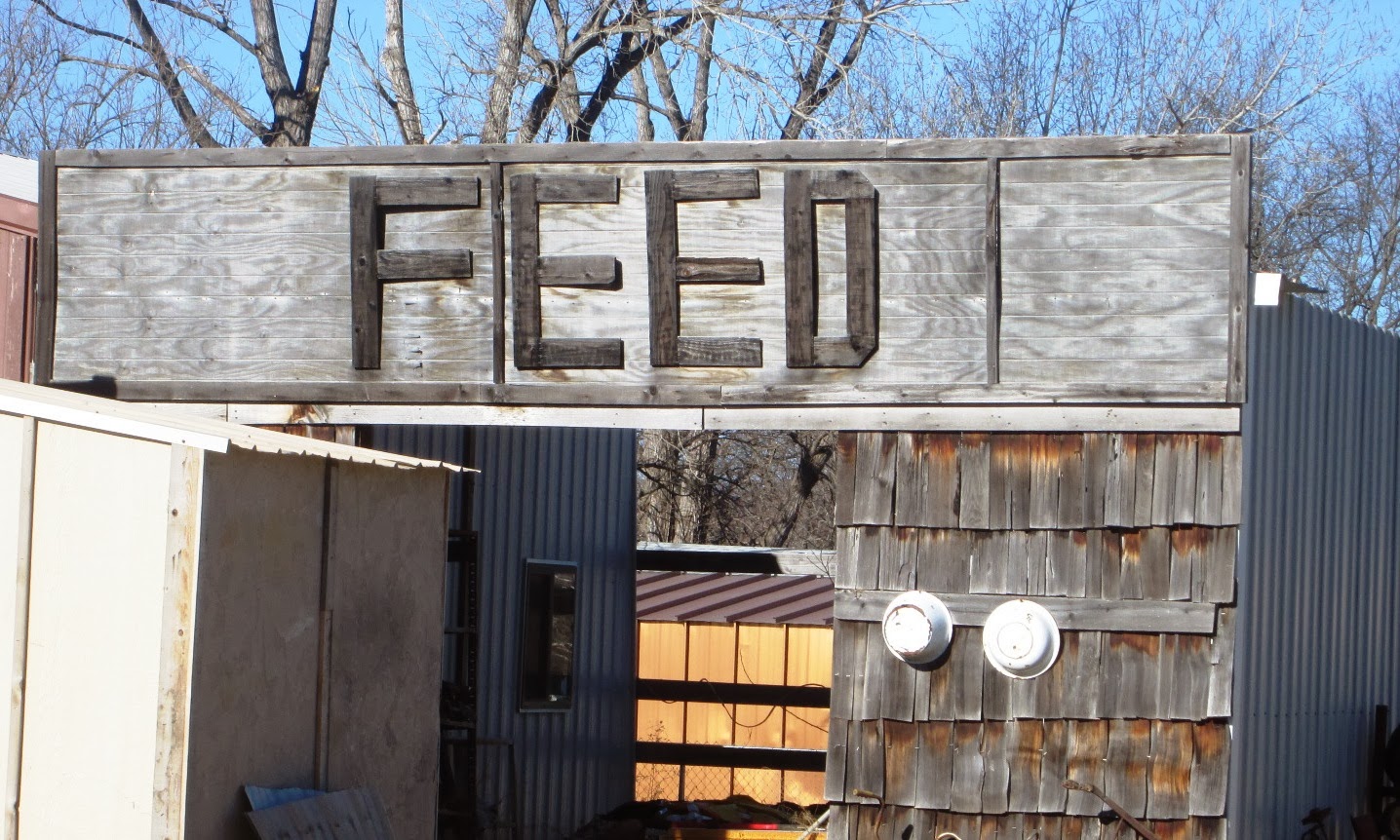 As you may remember, a couple of years ago I set forth to visit all of the historically all-black communities of Oklahoma's past.  I think I made it to 6 of them -- Boley, Langston, Redbird, Rentiesville, Taft, and Tullahassee.   I still have quite a few to go, and Ron  mentioned that another one, Grayson, was on today's route so of course I wanted to see it.  We were quite disappointed to find no obviously old buildings that might have been there in the past.   Wikipedia says that the town is still incorporated and now has a population of 158, but although we saw a few houses, we saw very few signs of life or reminders of the town's history.

Finally, as we headed home, we passed through Henryetta and out of the corner of my eye I saw an old D-X filling station.  It's a beauty, and is restored and being used as an auto detailing shop. 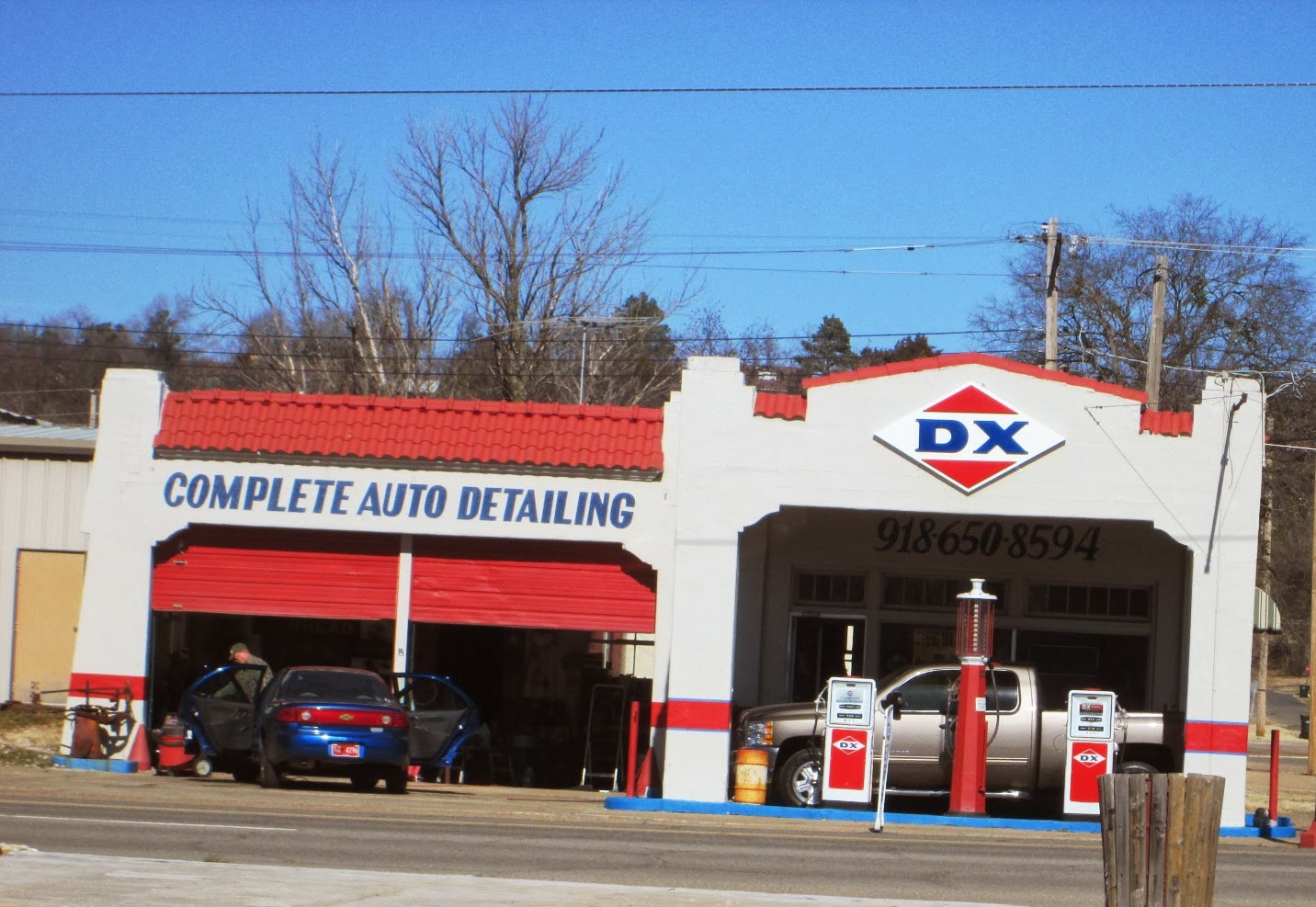 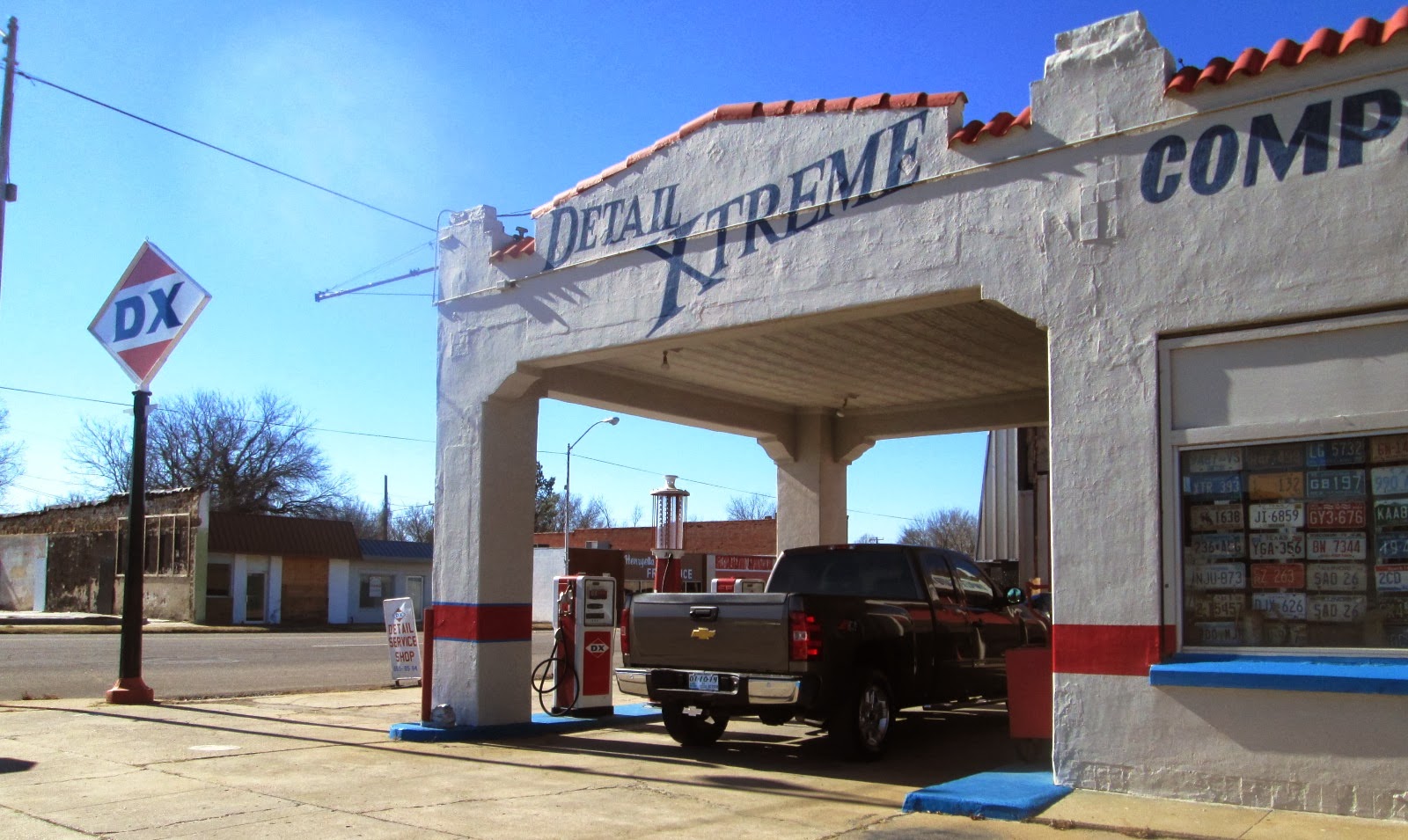 They have a sign like ours, a roof similar to ours, and several vintage gas pumps, both older and younger than those at Afton Station.   A very nice surprise find!

I left out our visit to Okemah, the birthplace of Woody Guthrie, because I have enough photos and information to do a full blog post tomorrow about that.  So, stay tuned. . .