I realized it's been a week since I posted anything here, and I'm sure you're all just starved for exciting information from me.  Ok, probably not.   But I don't want people to think I've disappeared because, to the consternation of some of you, I'm still here.    Since I've done virtually nothing on Route 66 this week, I'll just ramble a bit.

I now have new windows in my house, and they're quite lovely.  It meant a week of mess, noise, and 4 to 5 guys roaming around my house morning to night, but it was worth it.  They still have to do some painting of the outside trim, and after that I'll take a picture.  They still match the craftsman motif of my 1915 house, but are insulated and leak-free.  The old ones were 100 years old and really needed to be replaced.

My wonderful brown 2011 Subaru is at the dealer having its 100,000 mile checkup, even though the mileage is already over 116,000.  I'm a little late, but I put on so many miles in a month that it's hard to keep up.  It turned three  years old last week.  I am driving a loaner which is almost identical to mine so there's no learning curve.  The only problem is that there is no Sirius radio on board, so I can't listen to Howard Stern!

Driving down Riverside Drive, three swans started to cross in front of me, heading for the river, I guess.  The way cars speed down that road, I'm surprised they made it that far, and I hope they made it the rest of the way.  The only swans I've ever seen in Tulsa are on a small lake in a part of town called -- you guessed it -- Swan Lake.  If they came from there, they've taken a VERY long walk. 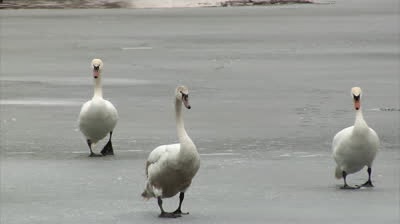 I almost burned dinner.  I put two lamb shanks on high to brown before braizing, and then left the house to get gas in the loaner.  Halfway there I realized what I'd done and SPED back.  Caught them just in time and dinner is saved.  I had invited Ron M. to eat with me, but he hasn't answered yet.  Since he's no fan of lamb, he'd probably have preferred that I burned them to a crisp.

Bored yet?   I'm hoping that next week (or maybe even this weekend), now that the window guys are virtually done, I can do some Route 66ing.   I need to get back in the groove!
Posted by Laurel at 3:11 PM