Twenty-eight visitors on the first truly cold morning of the year.  Not bad!   The first of the Route 66 travelers began arriving moments after Ron M. and I unlocked the door this morning.  T'was a young woman moving from Mystic, CT to Phoenix, AZ in search of work, since nothing is available in her field in CT.  Going west to find work.... shades of the Dust Bowl days.  She and her partner chose to make the trip on as much of Route 66 as possible.

A pretty red Corvette from Alberta,  Canada came next.   The folks traveling Route 66 were accompanied by Lola, a well-traveled dog, as they described her.  Cute, too! 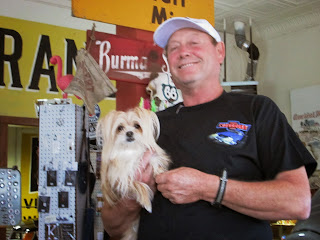 Check out these four great looking vehicles lined up across the street so that their drivers and passengers could come in for an Afton Station tour.  They're just friends -- not a car club -- and they came from both Richfield, NC and Newcastle, IN.  They sure made Afton look good for a while! 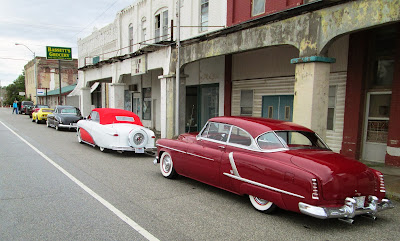 Did I mention that it was pouring rain this morning?  After the deluge ended, it sprinkled on and off all morning.  Nothing like a cold rain to spoil the day for a biker.  These two from Mansfield, Arkansas didn't seem to mind much although they came in quite damp.  I'm so glad the weather cleared up for them later. 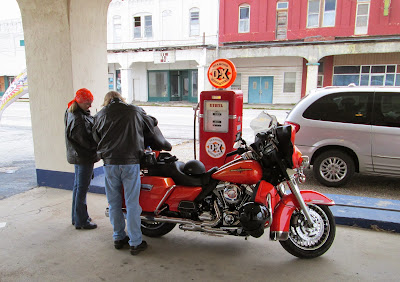 A woman from Van Buren, Arkansas came in almost entirely to see our penguin, Tripper.  She's such a lover of penguins that she even has one tattooed on the top of one foot!   Tripper was happy to oblige when she wanted a photo with him.   He often plays second fiddle to the beautiful antique cars, so he was most excited to take the spotlight for a while and be treated like a celebrity. 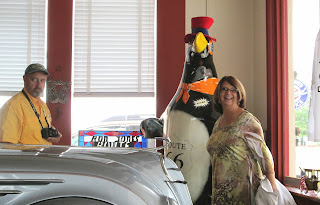 Yesterday Rann had more of an international day, with visitors from Australia, Switzerland, Spain, Finland, and Quebec.  He also greeted about 20 more visitors.  It's been very busy so far this October.

Ron "Tattoo Man" Jones, fresh off the plane from Las Vegas, also joined us for a while today.  He was out in Vegas being filmed for the TV show "Counting Cars" because he's having his '56 Chevy redone by them.  Can't wait to see him when the show is aired several months from now, or whenever, since they haven't begun work on the car yet.