Something dawned on me very early this morning, as I was listening on SiriusXM to Howard Stern's amazing Monday interview with Paul McCartney.  I've been concerned lately because I've become completely, entirely, totally out of ideas for titles for my daily blog posts.   So I made the decision that, for a while at least, I'll use Beatles song titles that fit the general feeling of each day at Afton Station.  Shortly thereafter, the most glorious sunrise revealed itself in the Eastern sky.   How perfect is that! 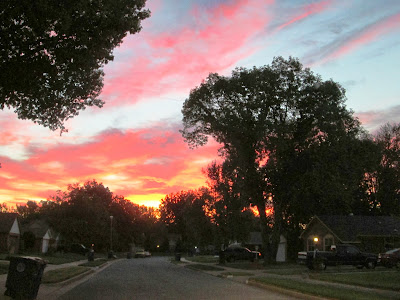 Here Comes The Sun
With visits from folks from Australia and Wales, it was a sunny international day on Route 66 and at Afton Station.  Of course, we also had an abundance of domestic travelers as well. 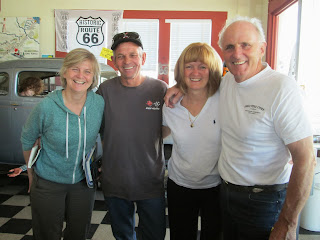 This happy foursome is from South Australia (actually from the towns of Modbury and Dervancourt) and they're having a good time a couple of days from the midpoint of their trip across the Mother Road. 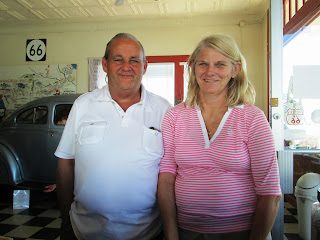 Later in the day, this Aussie couple visited on their own full Route 66 trip.  They are from Sydney.  He's a mechanic and his wife said he's very interested in vintage cars, so he spent a good bit of time examining ours. 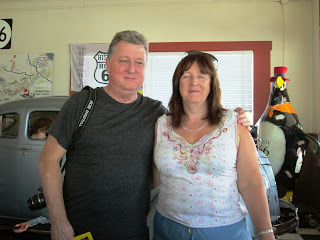 From the British Isles came these two from Chepstow, Wales, which they described as a tiny little town of only a couple of hundred citizens. 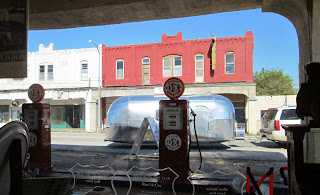 A new resident of nearby Grove, OK brought her 1950 Airstream to show to David, who has a vintage Airstream of his own.  David wasn't here, but I managed to snap a quick pic of hers as she pulled away.  It's in perfect condition, and I should have gone outside and taken a proper shot of it, but I guess I was just too lazy at the time. 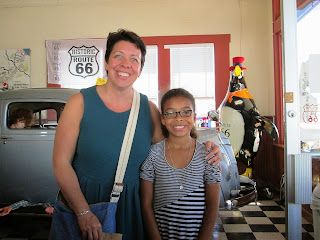 I'm always so pleased when parents take their kids on Route 66 trips.  This mom and daughter are traveling half of Route 66 (Chicago to OKC) on the daughter Chloe's fall break.  They're from Nashville, Tennessee.

We also had visitors from Kalamazoo MI, and Miami, Cleora, and Shawnee, OK.   The owner of the old Marathon filling station in Miami (OK), Daryl Buckmaster, came for a visit and to tell us that he and his son are almost ready to open their station to the public.  It's been restored and will sell antiques, vintage signs, etc.   Can't wait to visit it.  I'll let you know when the opening day is officially announced.  On Route 66, we are always happy to promote those who are doing their part to bring the Road back to life!

What will be the subject of blogpost "Hey Jude"? Or of "Maxwells Silver Hammer"?

Ha ha! Those will be difficult, Trevor. And what about Lovely Rita? I guess I have to wait until people named Jude, Maxwell, or Rita show up at my doorstep. Hmmm....