As we were leaving Tulsa on the way to Afton this morning, this beautiful, interesting, and somewhat ominous cloud formation appeared as the sun was rising.  Ron M. took the photo out of the front windshield as I drove.  Pretty neat, I think! 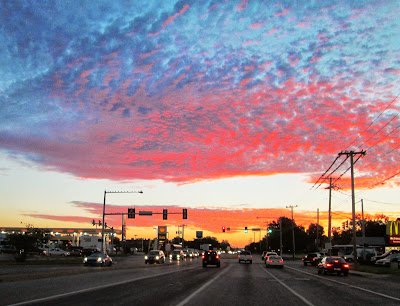 Despite having only 11 visitors today at Afton Station, the day flew past.   It must have been because all of our visitors were interesting and most of them stayed around for a while so we could get to know them. My "Route 66 Enthusiasm Award" for the day, however, goes to this woman from Califon, NJ who came with her significant other (shown below) and their nice dog Buck (not pictured). 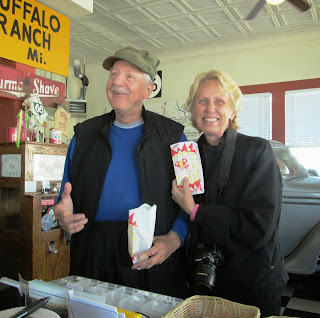 She virtually bubbled over with excitement about their trip, the Station, the folks they've met along the way, and even the fresh popcorn we gave them.   There is absolutely no doubt that they will have a fun and enlightening cruise. 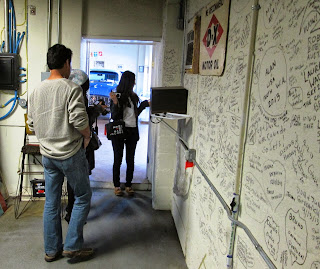 Three travelers from Japan (Osaka and Nagoya) were next, and they were fascinated by our signing wall.  They added their signatures to the wall which, as you may recall, started out as a signing door, then when the front of both doors were filled, spilled out onto the walls of the work room.  At this point, it's quite impressive.  Here's one from a few weeks ago: 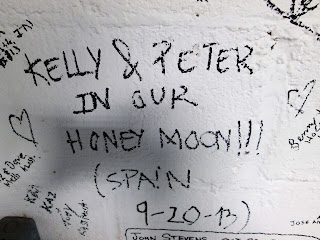 We've gone through a multitude of Sharpies! 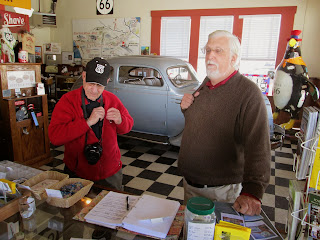 More delightful visitors -- two old friends, one from Powell, WY and one from Glens Falls, NY.  They've been soaking up every bit of Route 66 since leaving Chicago and we enjoyed hearing their impressions of some of the people and places they've encountered.   The gentleman on the right, from Glens Falls, is a theater organist and was given the opportunity to play the Mighty Wurlitzer at the Coleman Theater  in Miami, OK yesterday during their tour.  Wow, that's quite exciting!   Trust me, these guys aren't missing a thing.  They even  had the dubious experience of being rather violently chased from the premises of that "tourist trap" in Missouri (which will remain nameless, since I don't want to give them any publicity, even bad publicity) known for their propensity for getting very upset if anyone tries to take a photo of their tepee shaped buildings.  Fortunately, they recognized that that sort of "hospitality" exists only there, and not anywhere else on the Mother Road!

Our other visitors were a nice couple from Fenwick, Michigan and another couple from Tulsa, OK, members of the Mustang Club who have toured with the group to all parts of the country. 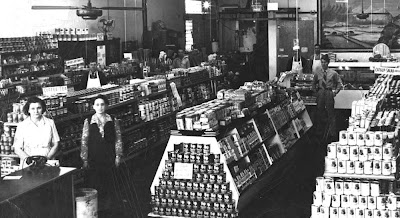 Here's a great picture of the interior of Bassett's Grocery across the street from Afton Station in its heyday.  Now it's been closed and crumbling for several years, but it used to be the premier grocery in the town.  It's not beyond help, however, if anyone is interested in purchasing the building.

Wow, look at that sunrise.

If I win the lottery, can I retire, move to Afton and volunteer to play gas station too? LOL

Hurry up and retire, Dave! You'd be such a welcome addition to the volunteer corps. It's the best job in the world, I assure you.