The title has absolutely nothing to do with the contents of this blog post.  The Simon and Garfunkel song was just playing on the radio as I drove home, and now I can't get it out of my mind.  That's not to say that today wasn't groovy at Afton Station.    Virtually all days are groovy on Route 66 as far as I'm concerned,  although today wasn't necessarily one of the best.  Too disjointed.  Being pulled in three directions at once.  That sort of thing.  On the up side, however, we had some great guests, and I was able to meet and get to know Joe Squires, an artist, writer, and postcard dealer with whom I've had a business connection for a while.  He came from St. Louis for a visit today and stayed for a good part of the afternoon.  Nice gentleman and extremely creative with his various art forms.

Our other visitors came from Taupo New Zealand, Vancouver Canada, Sechelt TX, Plainfield IN, Atlanta GA, and Wilburton, Vinita, and Chelsea, OK.   Although they were all great guests, I failed to take a single photo today.  It must be that a bit of end-of-season ennui is beginning to set in.  Also, I'm so, so tired!

Ron M. took a walk down to the former Rest Haven Motel and he took the camera with him.  The owner of the Rest Haven now rents out rooms and has been advertising on Facebook two one-bedroom units which are vacant at present.   We feel strongly that he might have a better chance to stir up some interest if he cleaned up the premises, which is just a mess.

He might want to start with the sign, which used to be (and still is, to an extent) a very popular photo op for Route 66 travelers.  Note the "BillsS PAiD".   A little sprucing up would be in order, don't you think? 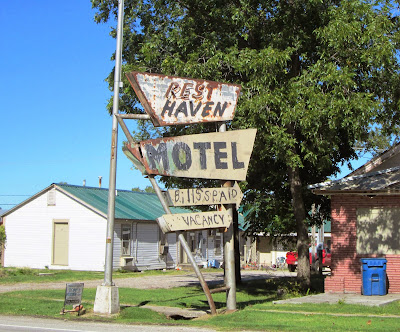