You can probably tell that these have been rather stressful days for me, and I'm sorry if it appears that I'm taking it out on my faithful blog readers.  My Afton Station time is such a treasuer, a respite from constant concern about Ron M.'s illness, a cool oasis away from the blast furnace heat and a VERY tempermental computer, where I am able to meet happy folks on vacations and siphon off a bit of their enthusiasm for Route 66.  I hope I'm imparting those feelings more than those of my "down" time.

This morning's guests, though few and far between, were just what the doctor ordered.  This couple from St. Catherines, Ontario, Canada has been on the road in their truck/w camper top for ages and have no particular finishing time in the near future.  He described himself as a "talker", and I won't dispute that description.  They spent an extra night in Miami just to drive back to Afton Station this morning, since they got there too late last night and we were closed.  They were having such a great time that their enthusiasm was infectuous. 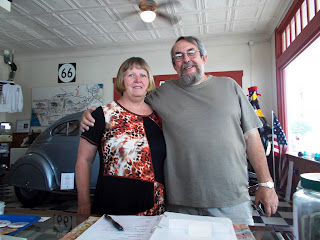 A little later, these four guys on Harleys paid a visit.  Mike Cummings (2nd from right) is a member of the Illinois Route 66 Association and a reader of this blog (Hi, Mike!).  He and his two cohorts are from the Chicago area.  The third guy (left) is Russell from Wellington, New Zealand.  The Chicago guys picked him up somewhere along the Mother Road and they're now traveling together.  They make a mighty fine quartet. 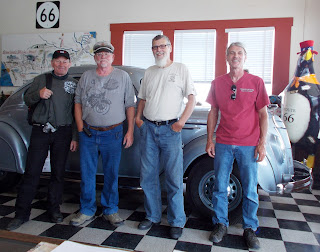 Next came a very cordial gentleman from Chesapeake, Virginia pulling a trailered '70 Porsche which he picked up in Arizona.  It has belonged since it was new to his uncle who is now in his 90s and wanted to give it to someone who would love it.  While he was there,  my friend and totally wonderful person Jerry "McJerry" McClanahan dropped in on his way to Chicago for a festival.  Mr. Porsche had visited with Jerry earlier on his trip and he decided to buy one of the magnificent Ross/McClanahan/Graham coffee table book "Sightings" while he could get Jerry's autograph. 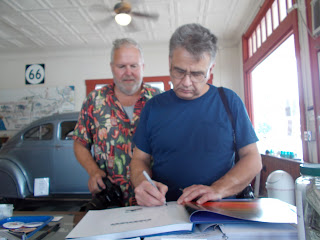 Ron M. is getting better and may soon be out of ICU and back in his regular room.  Thanks again to all who have directed good wishes and prayers to him.

Here's a picture I took this morning that I'll just call "Low Sky".  It was quite beautiful, and it looked like rain. Unfortunately, the rain never came and the drought continues. 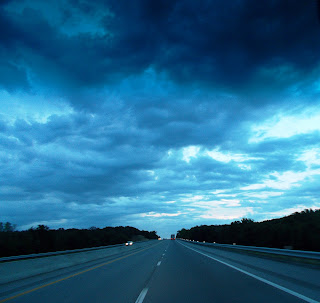 When will Ron be released?

Thanks, Trevor. Ron is coming along, but it will be a long recuperation. No release date yet, but I'll let everyone know. Thanks for your thoughts and prayers.