I'm frustrated because this is one of those days when I could tell all kinds of stories about our interesting visitors, make some personal comments on a big controversy that's taking place among loyal Route 66ers, and talk about some interesting moments that Robin and Phil enjoyed at the Station yesterday in my absence.  But I got home late and have so much to do that once again I'll have to make this a bit short.  On Monday I'll relax a little and be able to tell all.

It was a big day at the Station, with at least 30 visitors, although I believe I lost count toward the end of the day when they were really piling in.  Those that I did make note of came from Guyancort France, Leesville LA, DeRidder LA, College Station TX, Brussels Belgium, Cincinnati OH, and Tulsa, Pryor, Oklahoma City, Miami, Talala, Claremore, and Pauls Valley, OK.

This couple from Guyancort, France were the first in the door and were already warm from the motorbike ride on this torrid morning but were able to enjoy our air conditioning for a while.  We also treated them to some coffee made by Phil, who is also in the picture. 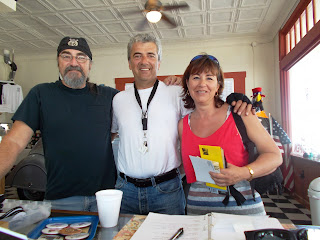 These two gals (Claremore, OK and Talala, OK) also arrived on motorcycles at the height of the 100+ degree afternoon so I trained a fan on them until they cooled down before they had to jump back on their bikes.  They stopped in as part of the Route 66 Passport program. 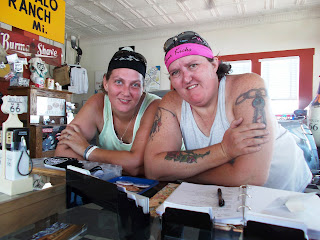 A lovely family from Oklahoma City stopped by and I  just had to take photos of their cute kids.  They're educating their children about the charms of Route 66 while they're still young.  We like that! 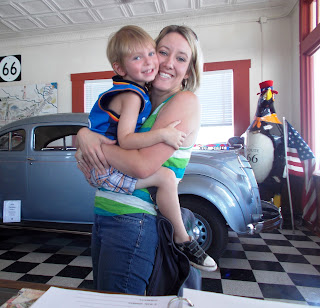 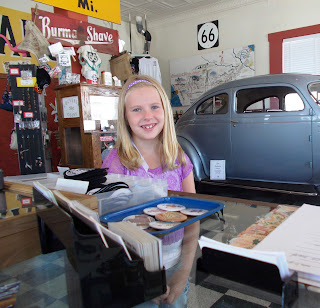 Finally, an absolutely awesome family from Brussels, Belgium came in to close out our day with a lot of fun and laughter.  It became clear that good humor overrides the language barrier, and the few words I speak in French and the few they speak in English led to all kinds of mirth on both sides.  I loved these people!  Here's the son Matthew Skilas with the Chicago Bulls haircut he got, not here but back home in Belgium!  And he made sure that I would let everyone know that it was crafted by Kevin Joly of "Coiffure Multiculturelle" in Brussels.  That's his dad peeking over Matthew's shoulder. 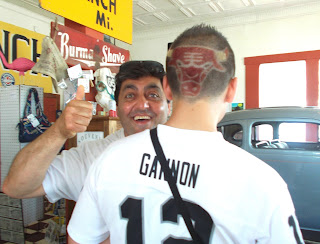 Many thanks to both Robin and Phil who helped me open and close today, and to Betty for dropping in to say hello.

Roll on Monday! With your introduction to this posting, you've got us wanting to hear the rest of the Friday and Saturday stories. Of course, if you have a busy Sunday, there will be even more to tell. No pressure, but we're expecting long posts Sunday night and Monday.

I went to Okemah yesterday to pay my respects to Woody on his 100th. Thought about you and your affection for Arlo so kept an eye out for him. Sorry to say I didn't spot him. I'll e-mail photos.