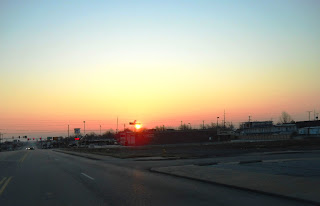 In keeping with the intended theme of this blog, I've decided that I'll be referring to my wanderings as "side trips", i.e. short meanderings off of Route 66 (but not far off Route 66) that might interest some folks who have time to spare as they traverse the Mother Road.  There.  Now I don't feel so guilty about reporting on non-Route 66 sightings.

Early this morning, just after sunrise, I trekked back down to Admiral Place to check up on the Admiral Twin.  There was no further progress since yesterday.  I guess they didn't work a Saturday shift.  I'll keep  you posted on how it's going, however. 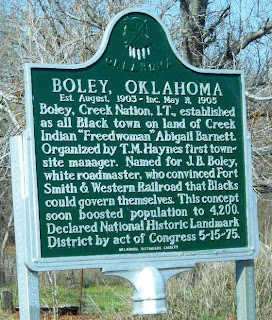 My Subaru and I then decided to take off in a new direction.  I'd read an article recently about the all-African American towns in Oklahoma and their place in our history.  Boley, which is southwest of the Route 66 town of Bristow, was one of the first all-black towns in the state, and for some time it was the largest in the nation.  As with so many villages in Oklahoma, it's barely a shadow of its former self.  A brief history reads like this:

The area was settled by Creek Freedmen, whose ancestors had been held as slaves of the Creek at the time of Indian Removal in the 1830s. After the Civil War, the United States negotiated new treaties with tribes that allied with the Confederacy. It required them to emancipate their slaves and give them membership in the tribes. Those formerly slaves were called the Creek Freedmen. 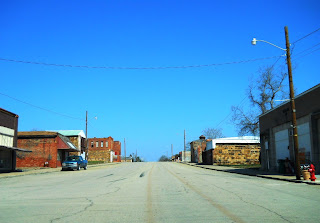 During my visit, I saw no storefronts that looked anything but vacant, and I saw just three people, a man waxing his car and two small children dressed in their church-going finery.  However, a recent article says this:


Boley is today as much a town of opportunity and challenge as it was in its early days.  The town’s population holds steady at around 900.  Its businesses include a manufacturing company, one cafe, one funeral home, a gas station, a hardware store, and assisted living facilities.

I saw none of the above.  "Challenge" is an understatement.   Although most of the homes seem inhabited and well-kept, I saw no signs of commerce whatsoever. I did, however, see a sign announcing that Boley has an annual rodeo.  Of the 60 black towns settled in Oklahoma after the Civil War, only 12 remain.  Boley is an interesting town with an intriguing history, but if it's the largest of the dozen, I can't imagine how tiny the others must be!

I then wended my way back north where I intended to meet up with Route 66 in Stroud.  Along the way, I drove through another small hamlet called Paden, which had this nice ghost sign advertising a dry goods store from its long ago history.  It was nearly as deserted as Boley. 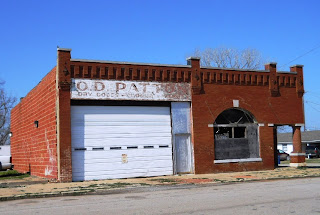 Next came Prague which, since this is Oklahoma and not the Czech Republic, is commonly pronounced with a long "a".  Prague was settled by Czechs, and is the birthplace of Jim Thorpe, once considered the World's Greatest Athlete (http://www.cmgww.com/sports/thorpe/ ).

More recently, Prague has gained recognition as the epicenter of the large number of earthquakes which have hit Oklahoma in the past year.   At least one or two radiated all the way to Tulsa and beyond.  I can attest to that since I felt them!  Prague is almost 70 miles from Tulsa, so I can imagine that the citizens of Prague were severely shaken!  This mural on the side of a building in Prague highlights the town's railroad history, Jim Thorpe, and it's Czech heritage.  Note the translation of their motto to Czech at the top. 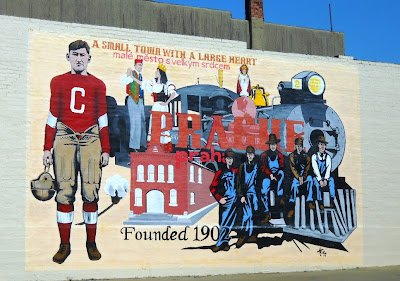 I picked up Route 66 in Stroud and made my way back to Tulsa. It always feels like a homecoming when I get back on my beloved Mother Road, although it's sure fun to find new pathways off the beaten track.

Glad you're seeing some new places and reporting on them. They may not be right on Route 66 but what you described and photographed today looks hauntingly like some towns on 66. I'm thinking now of Depew. These near ghost towns are ripe for exploration by urban archeologists and have the added bonus of people who still live close by who can help solve the mystery of "What happened here?!"