Every now and then I receive an email or letter from someone who once visited Afton Station.  I got this  yesterday from Peter Bartel of Germany, a gentleman who took part in the Trans America Footrace which came to visit us on July 26th of last year.   I remember Peter very well because he was doing the "footrace" on a kickbike (a bicycle with no seat or gears, which one pushes with one's foot), in deference to his age, although he'd had previously participated in years and years of footraces actually on foot.  Whether on kickbike or foot, both were amazing accomplishments for someone 70 years old.   And it doesn't sound like  he plans to stop any time soon! 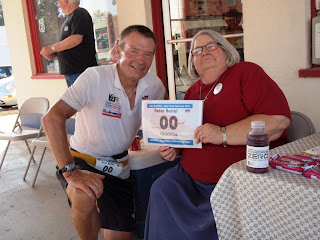 I just loved that he wrote to me and told me what he's up to these days.  I was so thrilled to hear that he finished the race, although I never really had any doubts that he would.  Here's his delightful letter with no corrections:


Hello Mrs.Kane,
please remember july, 26th, 2011. We met together in your museum at Afton which is a famous home for Packard Cars. I was the kickbiker in the Trans-America-Footrace from Los Angeles to New York. I gave my race number to you. And one month later at august, 27th, I was one of 10 finishers in New York. Six runners were out of the race. Please have a look to the pictures. Now I am in the 71st year of my life. Therefore I will participate this year only in the "little" Trans-Europe-Footrace from Danmark to Gibraltar (4175 km).
I am not only a runner. I am also an owner of a Packard Car ... built by myself. But only in scale 1/16. It is a Packard Coupe Roadster 12 Cylinder from 1937. I am also an owner of a "museum" because I have built more than 150 models: cars, race cars, bikes, race bikes. But my wife does not love this hobby.
All the best for you !!!
PETER BARTEL (Berlin/Germany) 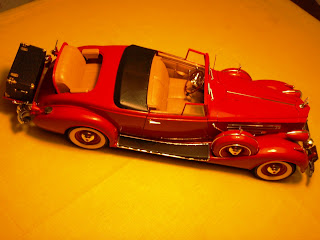 This is the model Packard which he built.  He's quite a guy!

It must be gratifying to have people remember you so kindly and want to write to you!

What a precious and sincerely written letter. Responses like this from people you've met at Afton Station must bring you joy. You've worked so hard to restore your piece of Route 66, making it place to remember for so many travelers. Thousands have enjoyed the station, the cars, and mostly, I'm sure, visiting with you. It's awfully nice that this particular one took the time to make sure you knew that.

Just goes to show how much you affect your visitors, Laurel.