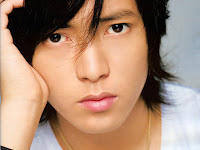 This past November 6th, I met a "famous idol, singer, and actor" and I didn't even realize it.  When Yamashita Tomohisa walked through the door of Afton Station with his entourage of 16 people, I really didn't know until I learned recently that one of the group was such a pop idol in his home country of Japan.  The handsome young man was traveling Route 66 filming a multi-part TV series which is finally available on Vimeo, including the episode where Mr. Tomohisa visits Afton Station.

Check it out here:  Yamashita Tomohisa  (Afton Station is at the 8:35 mark)

I have a few observations on what I gleaned from the visit, and how I compared it to the video which I've just recently viewed.   First, the video makes it appear that Mr. Tomohisa is traveling Route 66 alone in his beat-up pickup truck.  Very clever, considering the large crew that was continually hovering around him.   Secondly, unless you speak Japanese, you won't understand a word of the video.  I lived in Japan for two years and taught a class full of Japanese men, and yet I may have recognized three words during the whole thing.  This was definitely made for a Japanese audience. You will, however, see nice scenes of the road and get a bit of insight into what a foreign person finds interesting and important.  Interspersed amid the scenes of his actual Route 66 adventure, Tomohisa is seen discussing the trip with another gentleman as they sit in a cafe, bar, or some such.   I sure wish I knew what they were saying!  (I want glasses like the ones from which they're drinking!   If anyone knows where to get them, let me know.  They are desperately cool!)

The scene where Tomohisa comes through the door of the Station and is greeted by Tattoo Man and me was a set-up.  We had to do it about 5 times to get it just the way they wanted it, even though it simply consisted of a quick hello and welcome.  The crew was very particular about how things looked.  I am convinced of their thoroughness and professional capability.  They were very nice, too.  Ron "Tattoo Man" Jones gave a good interview.   I suggest you view all the videos in their entirety.

I'm disappointed that they skipped the city of Tulsa altogether.   After Afton, they moved on to Oklahoma City, where Tomohisa ate at Tapwerks, which is in Bricktown, not on Route 66.  Although his trip was far from the perfect Mother Road adventure, it won't surprise me if it increase Route 66 tourism among the people of Japan.  I certainly hope so!

I've been watching the episodes as Ron posts them on Route 66 News. I, too, would love to know what YT is saying as he's driving down the road and when he and Lily Franky are obviously discussing America and this road trip. I Googled LF and now know he's a writer and actor. Afton Station and her owner presented themselves well and Ron J. gave a good (and quotable) interview. Bet you're right about this getting the attention of potential tourists.

That's interesting! I've been following the show and wondering how many crew members he took with him, 16 is far more than I imagined. I didn't realize it was so staged.

By the way, you can find rough subtitles in english for the show at http://share.dreamwidth.org/tag/show:+route+66

Thanks for the info about the subtitles. I'll check it out!

I'll check it out, too. Thank you, Kira.

I'm so glad Kira provided the translation link. Didn't he say lovely things about Afton Station--and Ron! Into his fourth day he seems to have gotten into the rhythm of the Road and as he said, cleared his mind and was focusing on the task at hand. Don't know if he's Buddhist, but that certainly sounds Zen to me. It also sound familiar and why I love to drive the slow roads.

Ah, the magic of video! What an unusual brush with fame!

Actually, Susan, I wasn't able to access the translation site. I've asked a few other people who also couldn't. Do you have a secret to making it work?

I copied and pasted the link and it opened first time. However, I had trouble spotting the subtitle link once I was on the page, but took a more careful second look and saw the word Softsubs in bold black just below the Highlights synopsis. It's a hyperlink in blue. Then click on the green Download bar and open with Notepad. What comes up then looks at first glance like gobbledy gook but scan down to the first line that starts with the word "Dialogue". Every exchange will begin with "Dalogue." A couple of times I've gotten an Ooops! Something's wrong with your download message but just tried it again and got in.

OMG, that was really cool!! Afton Station is even cooler than I thought it was.

About tourism, i wish this tv show increased the tourism on route 66 at well. I'm one of Yamashita'fans and believe me, i would like to live a experience like this. Of course, route 66 would be the first =D.
By the way, i love your museum. You have a really beautiful collection in there. Nice work!
Greetings from Mexico.
P.S. Sorry for my bad english =P

I traveled a part of Route 66 during the summer of 2011 and as a fan of Tomo's I was really excited about his show. I knew he would have a lot of people with him, but I also realized that being without his main manager and stylist was a huge deal.

The show is still beautifully shot and you get this sense of genuine americana, which I experience as a first time traveler across country. It's quite beautiful and I love people's reactions to him.

Just found this, and wanted to say how lucky you are! YamaPi is one of my favorite idols! Hope he was as nice as he seems!

it sure will increase tourism there, i just finished watching YT route 66, and as one of his oversea fan i badly want to get there too, get the real feeling of the long drive. i think it does has many interesting places to visit. oh and your museum is an incredible place too, hope one day i'd be able to drop by... i think the show would likely increase non-japanese tourists either since Yamashita is quite famous in asia

Well, I have heard that P's was exceptionally scripted, from what I heard others are more easy going.
IDK, that's what they say, but I'm just hoping Takki's trip at least is more natural. Really don't want to know that the scenes are fake >.< One more hour to go~