It seems like such a long time since I've been on Route 66, although it's only been six days.  Today was my first day at Afton Station since last weekend, and it was a good day for getting back in the groove.

There were 28 visitors today, but 20 of those were a Cub Scout pack and their fathers.  The rest were travelers of one sort or another.

David's son Patrick is a Cub Scout, and he invited the pack to Afton Station for hot dogs, rides in some of the old cars, and a birthday cake for one of the little boys who was celebrating today.  The kids (and I believe their parents, too) had a very good time.   The little boys particularly enjoyed tearing around in the back yard and crawling around on the old cars, the trailers, a playhouse-size castle, and other assorted junk. 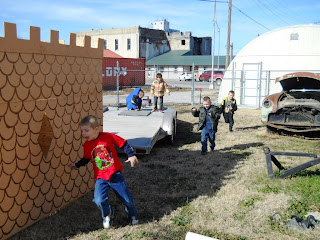 The boys also got a huge kick out of being able to each squash a penny of his own choice.  The mob scene around the penny press resulted in some coveted souvenirs! 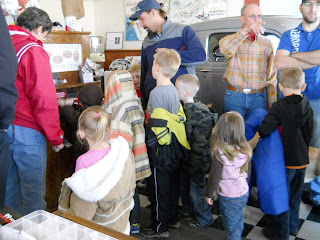 The fathers (and one mother) mostly hung out in the car showrooms and admired the iron. 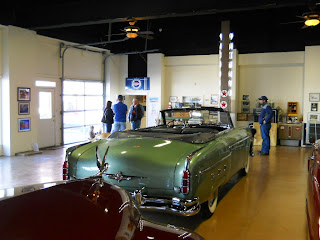 But there were 8 other visitors today, too.   They came from Nevada MO, Dewey OK, Ulysses KS, Fairland OK, and Oklahoma City, OK.    The Oklahoma City folks were Rick and Richard from Cimarron Photographers, our friends who are doing a video about Oklahoma Route 66.  This is their third or fourth visit to Afton Station, and they keep finding more things to shoot.  It should be a most interesting video!

The usual suspects almost all showed up today, too.   Ron M., Robin, Marly, Betty, and Tattoo Man were around for most of the day, and David's wife Sylvie was there, too.  Phil was the only one absent today.   He's been in California and is driving home (on Route 66, or course) starting today.

We will be open tomorrow, even though I had told a few people we would not.   Robin volunteered to work tomorrow, so if you're in the area on what is expected to be another lovely day, make plans to stop in.
Posted by Laurel at 5:32 PM