Saturdays and Sundays in January are proving to be as busy as some summer days at Afton Station.   It certainly causes me to realize that I shouldn't ever close completely in the winter.  Last winter I took a lot of weekends off, and it showed in our number of visitors and sales.  It's wonderful to have Robin to open on Sundays so I can take a few off in January and February.  Meanwhile, I love being at the Station on Saturdays.

Last Sunday Robin visited with 12 travelers, and today we had another twelve.   Ron M., Tattoo Man, Robin, Phil, and Marly were all present.   Our visitors, with the exception of two gentlemen from St. Louis and two from Ottumwa, IA, were all local to Oklahoma, and most were making their second or third visit to the Station.  Friends Jim and Becky Buck from Sapulpa OK, who used to have a very cool little Route 66 souvenir shop in that town, stopped in to say hello.  I'm happy to report that Jim is now cancer-free.  Jon Edwards, a frequent visitor from Tahlequah, OK stopped in with his grandson on their way to look at some vintage cars for sale in Miami.  It's always nice to see Jon.  Usually he arrives on a motorcycle, but this time, in deference to the cold weather, they came in a car.  Other visitors were from Miami and Nowata, OK.

Here are Jon and his grandson looking over the fabulous new book, Route 66 Sightings, by Ross, Graham, and McClanahan. 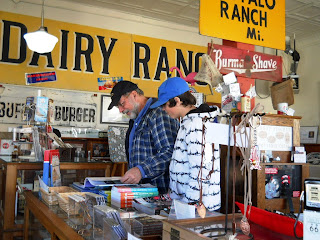 Meanwhile, some major automotive design and production was occurring in our work room.  David and his 7-year-old son Patrick, as well as two other fathers and sons from Patrick's Cub Scout pack, were busily creating vehicles for the upcoming Pinewood Derby.   It involves little blocks of wood from which the Cubs must fashion cars which will be run down a sloping course -- a soapbox derby in miniature.  The boys are responsible for carving a car or truck out of the little 6-inch-long block of wood, sand it, paint it, and affix wheels.  Their imagination can go wild. 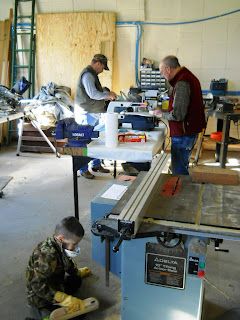 Of course, the dads can help.  In this case, David had the tools and he and Marly provided the expertise.  Marly showed the boys how to use the airbrush, which is the professional one he uses in his car resto business.  The kids did some very impressive work, and we'll be rooting for one of them to win at the competition.  Here's one of the little cars, which the boy described as a "Dodge Pickup", with just the first coat of paint and without wheels or decals. 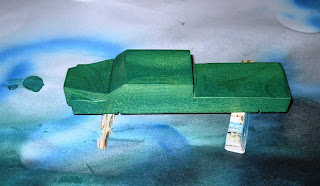 Two gentlemen from St. Louis? That would be one gentleman and one lady. :-) I'm pretty sure we were there on Saturday. Time on the road is beginning to run together.

Although I confess that on a busy day I sometimes lose track of where folks are from, I do clearly recall two men from St. Louis. And then, on the other hand, I've been known to misread the little notes I make on a piece of paper in order to recall the origin of each person. Hmm.. now you've got me thinking. . . Maybe there were FOUR people from St. Louis. Remind me of what we talked about and I'm sure I'll remember you immediately. How embarrassing. So sorry! :-(

Therefore it is not the same as in times past to lead to a chariot for the establishment of an observation of the power of order.