It was before 8 a.m. and I was already restless.  What's wrong with me?   I'd been to breakfast and then to the gas station, and I simply can't resist a full tummy, a full tank of gas and a generally free day.  As I believe I've admitted before, I'm running out of places on Route 66 in the immediate area (meaning northeast Oklahoma) to explore and photograph.   The morning was cloudy and blustery, but that didn't stop me.  I decided to start close to home.

There's a cemetery on 11th St. (Route 66) that is less than a half mile from my house.  It's a pretty ordinary vintage early 20th Century cemetery except for one or two things.  For one, it's felt that a mass grave was dug there in 1921 to bury the victims of the Tulsa Race Riots.  This has never been entirely proved, but a very interesting story which has led many to believe that it's true can be read here: www.tinyurl.com/7y5qjce.  Secondly, the view of the Tulsa skyline is wonderful from the cemetery.   Even on a darkish morning, I got these decent images. 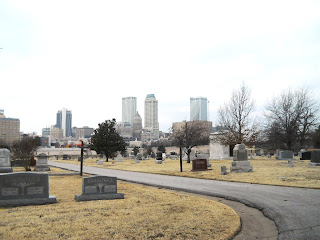 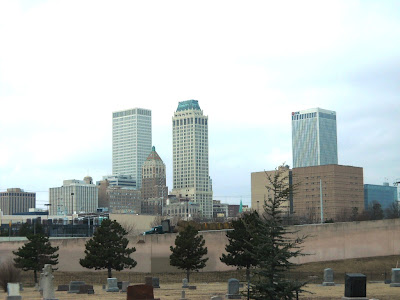 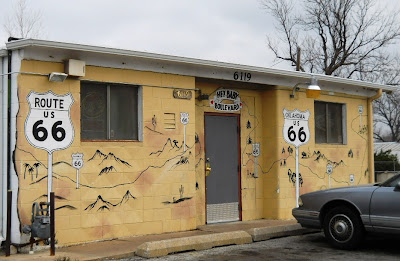 Back on 11th St., I found one more place that I've overlooked in the past.  A small bar called the 11th Street Pub has a mural of sorts across the front of its concrete block building.  I believe it's meant to be a map of Route 66 from Chicago to L.A., but the appearance of mountains in the general region of Illinois leads me to believe that it's just a speculative representation, and that's good enough for me!   If only more establishments along 11th St. would display the Route 66 shield as prominently as the 11th Street Pub, it would work as a guide for Route 66 visitors as well as good business for those establishments, since we all know that Route 66 tourists are far more apt to enter businesses which are so marked.  The Pub also has this great greeting on its west facing wall. 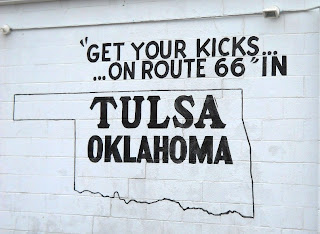 Finally, I will close with a little quiz:

A few years ago Bruce got interested in genealogy. He discovered that some of his family are bury in that cemetery. We went by there one day. Strange thing is there used to be a Campbell 66 Express office across the street from it. Bruce said he had looked out the office window many a time not knowing he was looking over family history.

That's really interesting, Linda! I had no idea that there was a Campbell Express office in Tulsa, but I have only lived here for 6 years.

Well, so much for my memory. It was not Oaklawn but Rosehill cemetery we went to once. Yes, Campbell 66 had busy terminal in Tulsa. Bruce is thinking that Tulsa was ordinary in his dad's company, Sunflower. It became part of Campbell 66 early '40s.

The pub's "map" is certainly interesting as is the sign over the door. I'm reminded of the disadvantage, which we've talked of before, that respectable women face with unfamiliar establishments. A young lady such as yourself might feel justifiably uncomfortable walking into The 11th Street Pub alone whereas an old sot such as myself just might walk in, order a long neck Bud, and find out what kind of story is behind "Hey Baby Boulevard".

Oh, and the tinyurl for the race riot article (which appears again at the end of the post) seems to be ill.

The rogue Race Riot link at the bottom of the article is meant to be ignored. It showed up there and I can't seem to remove it. I'm still learning this new Chrome way of blogging, and there are a few things that mystify me. I can delete other things, but that link is stubbornly there.

Agreed. I'd have to think twice, three times, or more before swaggering into the 11th Street Pub and ordering up a Bud. On the other hand, you calling me a "young" lady, despite it being 3:37 a.m., has already made my day. Somehow I feel that the "hey baby" over the door was not meant for those of my ilk.

When I first posted, even the properly placed pointer was failing but it's just fine now and that is quite a story. As I read of money issues and last minute discoveries that prevented excavation I had the feeling that the story could have come from somewhere in Eastern Europe. And that's not a dig at Oklahoma or Tulsa. There are far too many similar stories from places throughout the U.S. And, even though the “what happened is pretty clear” conclusion in the last paragraph is true, I'm sure there are those who claim to doubt it.

I found out shortly after I moved to Tulsa that the issue is still very sensitive around here. It's ongoing, too. In fact, funding for our Greenwood Cultural Center which was begun in the '80s dedicated to the understanding of the race riots is in trouble financially right now. Fortunately, two excellent books were published shortly after I came here so I was able to gain an understanding of the whole issue. But when I came here, a person I met told me, "We don't talk about that."