I hope no one is deeply disappointed when you find out that I didn't have time today to do the intensive, botanical research I promised yesterday on the subject of soybeans. (Yeah, right...) Take this, instead. 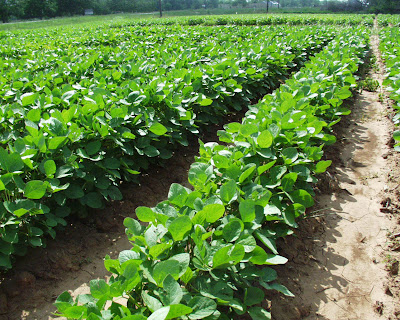 It's late summer in Oklahoma. The cornfields along Route 66 between Tulsa and Afton are going brown, and some have already been reduced to stubble. But other fields, often side-by-side with the dying corn, are brilliant green. Soybean season! I had planned to just show a photo of one of the fields, but then Ron M. brought to my attention a magazine ad for Soyjoy entitled "During the Dust Bowl Soybeans did more than just revive the earth. They helped revive America." Since Route 66 is so interconnected to the westward flight of farmers during the Dust Bowl in the '30s, I was immediately interested. Further reading of the advertisement revealed the following:

The Great Depression turned the land of opportunity into a land of
despair. Struggling farmers, in an attempt to reap greater profits,
cultivated large tracts throughout the Great Plains. This removed precious nutrients from the soil, putting a great strain on the land. . . Enter the soybean. Packed with replenishing nitrogen, it gave back to the land what crops like corn and wheat stripped away. Planted in large quantities and utilized in crop rotation practices first developed in ancient China, soybeans helped suppress erosion and hold the ground together. 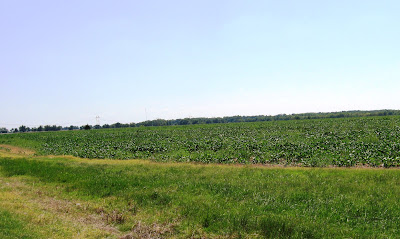 So now I know why there are so many soybean fields, even today, in Oklahoma! And, now I'll be even more thankful each time I eat edamame!

Oh, one more thing! Put October 4th from 2 to 3 p.m. on your calendars. A country music group called The Road Crew, which includes Joe Loesch, a very avid Route 66 fan, is coming to Afton Station to give a mini-concert! More about this later....

Lots of soybeans here, too, and they are definitely a great crop to grow!