I don't think I have this "selling" thing down to a science quite yet. I'm fairly new to running a store, and although Afton Station is mostly a museum and visitors' center, I do have an area in which I sell Route 66 guidebooks and other books, as well as some small items like magnets, keychains, and patches. Everything I sell is written by, created by, or merchandised by personal friends who are deeply interested in Route 66. I feel pretty strongly about not sending Route 66 money off to China, so I don't carry any of the usual souvenir stuff.

But even with so few items for sale, I still have trouble keeping up my stock. Restocking just doesn't work very well for me. Just when I think I have plenty of everything, someone will come in and buy a dozen of Kathy Anderson's unique key chains, or there will be a run on Jerry McClanahan's "EZ66 Guide", and I'm left short. Since I don't believe in spending money I don't have, and since I try (not always successfully) to separate my personal funds and those of the store, I can't buy stock in large quantities until I have enough funds to pay the suppliers in full and immediately. I guess I'm just not experienced enough to be able to project how things will sell. It's very quirky -- an interesting, but frustrating, learning experience.
_______________
The Vinita Will Rogers Rodeo begins tonight. I stopped by the rodeo grounds this morning hoping to find some great photo ops, but all the animals were behind chain link fences. Bulls just don't look that imposing when they're caged up. This guy was small, probably a roping bull rather than a riding bull. But at least he was close enough to the fence that you can vaguely see him. 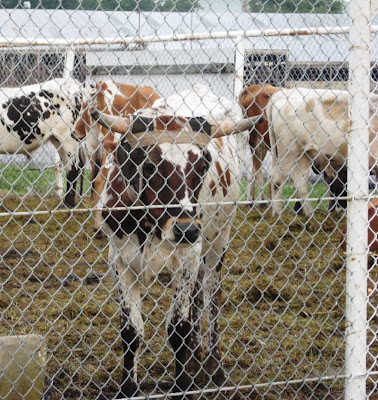 _______________
It was a slow day, visitor-wise, at Afton Station. There were only six, and they came from Mt. Vernon IL, Grove OK, and Scandia MN. The congenial folks from Minnesota came in when David and I were being interviewed by a reporter from The Chronicle of Grand Lake, so they were interviewed briefly as well. They arrived in a very nice pink and black Ford. 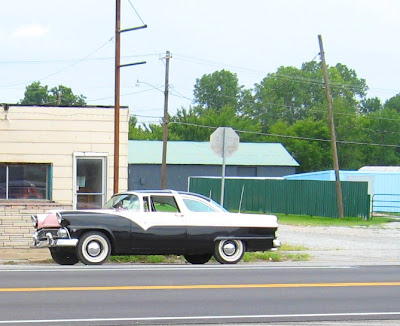 The reporter, Bart Montgomery, a nice guy who is an excellent interviewer, stayed for about two hours while we talked his poor ears off. I'm not sure when the article will be published, but you'll be the first to know. That's him on the left, talking to the folks from Minnesota. 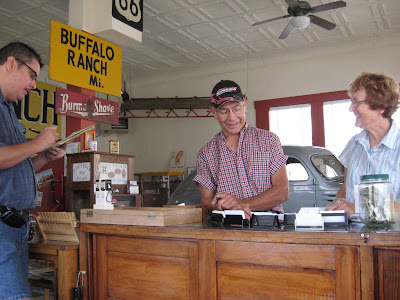 On the way home, I drove through three separate but short (about 5 minutes each) thunderstorms. One was pretty violent, the others were mild. Got a good free carwash!
Posted by Laurel at 5:27 PM

That Ford is sweet. Love the pink and black color combo!

I have no knowledge of marketing. Things that I love are sometimes things that others go "What the hell do you want that for?" LOL Just rotate stock as best you can, and go from there!

My wife is the business major from college.

I, on the other hand, couldn't manage a lemonade stand.

Looking at that old Ford makes me think: "When his engine roared they called the highway 'Thunder Road'"