Dust, Noise, and Some Great Visitors

I have just arrived at Afton Station, bright and early, only to find the excavation crew already here and waiting for David. He's having the pad poured on which the new building will be built. I'm both happy and sad about this. There will be more room for cars, but the building will partially block the view of the Station for people approaching from the west. I think, however, that if we cover it with cool signs a liability can be turned into an asset. The jury is out on this. 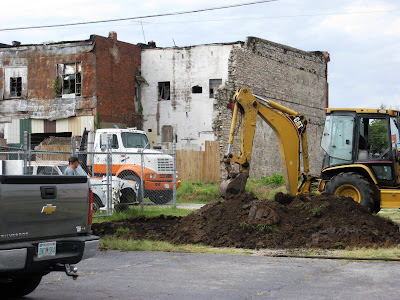 Check out the dilapidated buildings backing up to our property. At least the new building will hide that lovely vista!
____________
David just got to the Station and is pulling some of the old Packards out front. That should draw in some visitors, despite all the construction happening in the parking lot. I have a feeling today is going to be just a little bit chaotic. 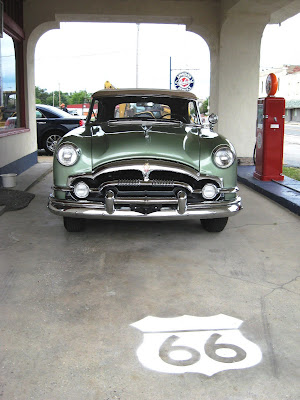 Yes, my prediction of chaos has definitely come true. The work continued to progress on the new building site, with all the accompanying dust and noise. Later, another fellow arrived, hired by David, to reconfigure the wall in the work room to accomodate the new air conditioner. So pounding and sawing has been added to the din. Eventually, Perry Knight (see previous post) and his friend Marilee came to take a ride in the '34 12-cylinder Packard. Both got separate rides, and David even invited Perry to drive the car himself, an offer he gratefully accepted. Although you can barely see him in this photo, that's Mr. Knight behind the wheel. 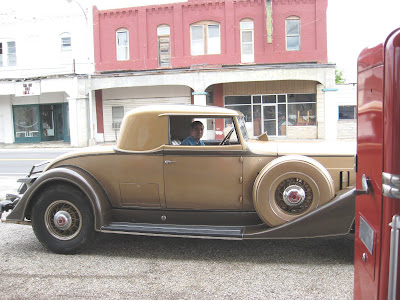 Of course, other guests came and went all day. I didn't get make notes of them all, but there were about 14, and some came from Spring TX, Oklahoma City OK, and Padua, Italy. (BTW, David tells me he had 4 visitors from Genoa, Italy yesterday when he was here working, so this has definitely been "Italian Week" at Afton Station. ) Apparently Italy is sending all the cute ones over here this year. Here are today's visitors from Padua. Another very attractive couple, and nice, too! 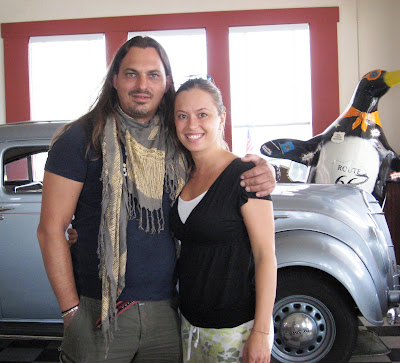 Toward the end of the day, several loads of rock had been delivered and when I left, it was being raked and smoothed. Here's David, the contractor, and Blackjack inspecting the work. I suspect that the pad will be poured tomorrow, and it won't be long before the building is up. 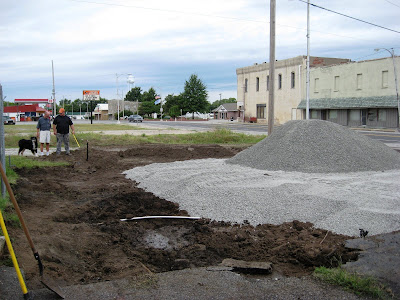 Sounds like quite a project, hope it goes smoothly :o)

I bumped into an Italian couple at the Arcadia Round Barn a couple of weeks ago. They seemed to know only a few words in English. But, we were still able to get our points across.

A took a picture of both of them in the Barn for them.

For me, the sound of construction is a mixed thing. You know that something exciting is happening, but the noise is so irritating!

Those dilapidated buildings intrigue me (of course). Do you know what they were? Hugs, Beth