. . .  the Spanish, the Italian,  the Japanese, the Czech, the Norwegian.  The languages, not the people. . Those and dozens of other languages often make my days at Afton Station  fun but very frustrating as well.   Today I was thinking about the traveling folks from so many foreign lands who have visited in the past 12 years and the languages they speak.   Such beautiful people deserve more than just a friendly smile and a few rudimentary words in their tongues, but frustration overcomes me when I want so badly to be able to converse with them about their lives, their countries, and most of all, their Route 66 observations.  Although much can be "said" with body language and laughs and smiles, in most cases in-depth exchanges can't be accomplished.   Blame the Americans.  In nearly every case, the folks from other countries have been exposed to English enough that they can at least say a few words here and there.  We Americans, on the other hand, are comparatively uneducated in other languages.   I know a wee bit of French.  I can count to ten in Japanese.  I know how to use Google Translator.  That's about it for me.

Of course, even without language there is something that brings us together -- both the travelers and those of us who mind the stores along the way.  It is the spirit of Route 66 that bonds us together, why a young Chinese man ends  his visit with a smile, why an Italian honeymoon couple wants selfies of us, why an older Norwegian woman leafs through a copy of Images to find a photo that illustrates a question she wants answered.  Where there is a will, there's a way.   Even so, I wish I could speak about 30 languages.  That should be enough to get me through a season at  Afton Station. 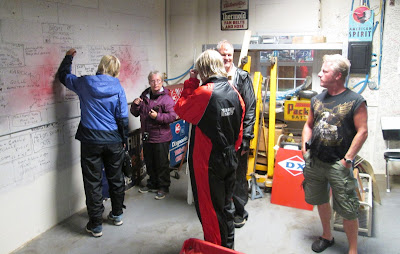 The Norwegians (with a couple of Swedes) came in a group on Harleys with a chase vehicle.  By the time they arrived at the Station they had driven through hard rain.    Still perfectly  cheerful and unfazed by their dampness, they took turns signing our wall. 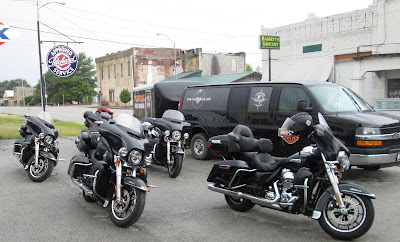 Below are folks are from Colorado and Texas who are cruising Route 66 in their cool Corvettes, 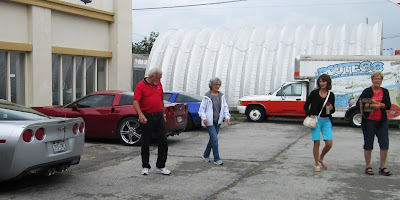 Here, with Ron M., is Toshi Goto, president of the Japanese Route 66 Association. 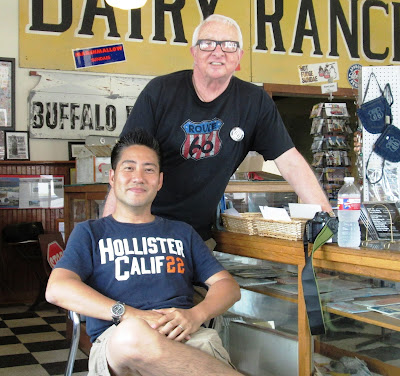 He visited for about an hour this afternoon, and what an interesting fellow  he is.   He's in the states for a month and spending some time getting to know as many people along the Route as possible.  He said he has about 80 folks in his association at home and plans to bring a group next summer.  Having lived in Japan for two years, I was too embarrassed to tell him about my Japanese being confined to the numbers from 1 to 10.   :-(

Wow, you've nailed it Denny! My brother, who lives in France, is fluent in that language and me....just like Laurel with her Japanese, I'm lucky to count to 10 in French. It's laziness on my part and embarrassing. Merci! :)