The Great Race isn't a race in your traditional sense.   The 117 cars which enrolled this year were not expected to tear down Route 66 at breakneck speeds.   Instead, it's more of a rally, a timed event that shows off the mathematical ability of the navigator, the patience of the driver, and the reliability of the car. This year, the cars are traveling Route 66 from Kirkwood, MO to Santa Monica, CA.

Today, the Great Race came past Afton Station.  The cars came one at a time, about 90 seconds apart, being careful not to get to the next timing station even so much as a hair before or after the time they were expected to be there because that would mean a loss of points.  They didn't stop at the Station since they were headed to their next stop at Claremore, but it was fun to watch them anyway.  Jody Gardner from Grove came to cheer with us.  Her husband Rex's red 1935 Ford 3-window coupe  led the parade today since the course was coming through his home state.  It is his 20th Great Race.   Entrants came from all over the world. Here's Jody, cheering on her hubby 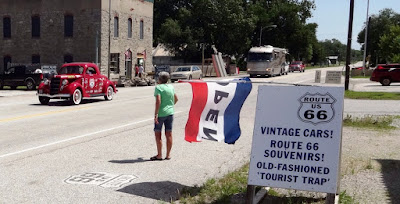 Many cars followed, taking about 2 hours in all, as we watched from the cool breeze of our portico.  Michael Wheat came over from Pryor to take in the spectacle, and in fact most of the better photos are his.   I am decidedly NOT a good car photographer.   Ron M. was here too, and helped watch the store while the rest of us were mesmerized by the passing parade.  Several other folks stopped to watch, too. 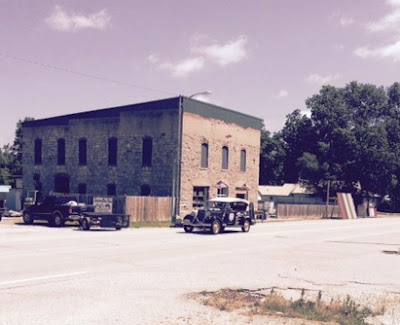 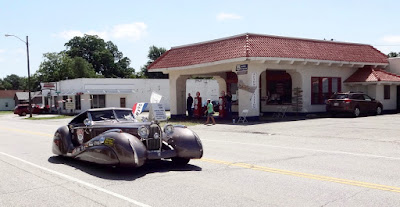 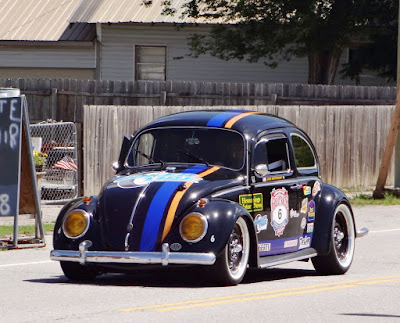 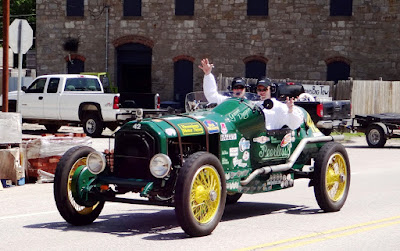 Much can be said about the rules, regulations and history surrounding such an event.  To learn more, go to www.greatrace.com.  It's fascinating stuff, including the dispensation of the $150,000 in prize money available.   If you are west of Oklahoma City, where the fleet is resting tonight, you might be able to catch them later in the week at one of the Route 66 cities listed on the site.

Others came to Afton Station today, of course.   Betty came to watch the race with us, and several visitors dropped in as well.  Takai, a Japanese fellow whose last day as a exchange student in an Afton home, came to see our collection.   His whole American "family" came along, a nice Fathers' Day outing. 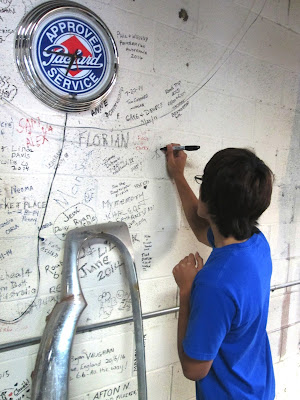 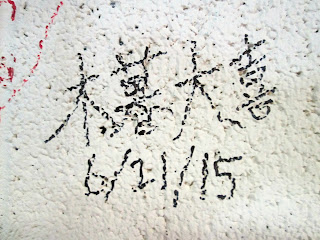 A couple all the way from Grand Coulee, Washington were also very special visitors. 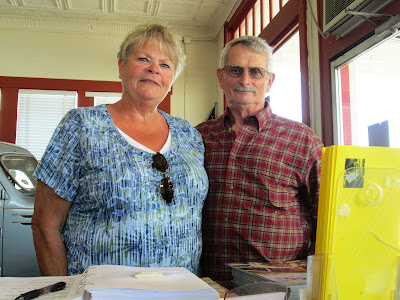 Ontario, Canada travelers stopped to check the Great Race cars, and others came too, wondering what we were all doing outside in the hot wind staring down the road waiting for the next car.  It certainly wasn't an ordinary day at Afton Station, but then who really wants ordinary?!
Posted by Laurel at 6:18 PM

We saw 10-12 of them between Springfield and Joplin on I-44. It was really fun. We were wondering if they got off the Interstates and unto ro Route 66. Your place would have been a good place to watch.