The eGroup breakfast in Joplin, a part of the International Route 66 Festival, was outstanding, despite the 2 hour and 45 minute drive in the rain to Joplin in order to get there by 7 a.m.   We (Ron M. and I) were actually early!  The breakfast is my favorite Route 66 event  every  year, and I'm sad when I have to miss it.  As usual, Mike Ward from Phoenix was the Master of Ceremonies, which consists of conducting a huge drawing for door prizes which we all contribute, and as usual there were more prizes than people, so we had to go around twice.  I won a cowboy boot full of sunflowers from the Kansas Route 66 Association and a big duffel bag filled with all sorts of cool stuff from the City of Joplin!  Here's Mike in his pin-encrusted leather vest. 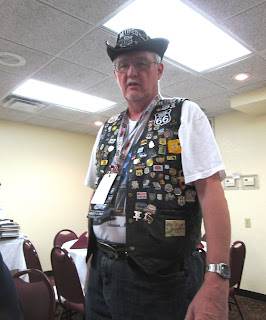 Here's Joe Loesch of the Road Crew, reminding everyone of the two concerts upcoming, one in downtown Joplin tonight and the one at Afton Station tomorrow at 1 p.m.   (By the way, looks like lots of people will be at the Station for the concert tomorrow.... I'm psyched!) 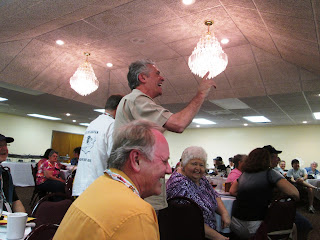 Marty Bilecki spoke briefly about the ever growing popularity of Route 66. 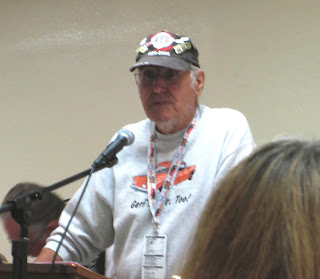 It was a wonderful occasion, but all good things must end.  Knowing that I'd see most of these folks tomorrow at Afton Station made it easier to leave.  It was the largest and best breakfast of all, but I wanted to get back to the Station to relieve Robin and finish the day.

We stopped only once, in downtown Joplin to see the new murals.  Ron snapped a quick photo. 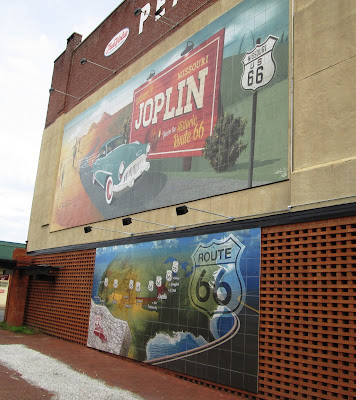 Once back in Afton, we had an afternoon full of interesting visitors.  Another beautiful European honeymoon couple came in first.  They're from Genoa, Italy. 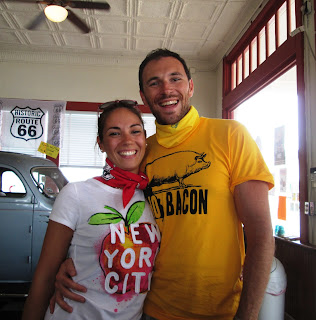 Bill Catlett stopped by. He's a gentleman who stopped in to Afton Station last summer on his bicycling adventure on Route 66 in which he cycled all of the Route, gave 100% of donations to charity, and then wrote a book about it.  He came in this year specifically to give a copy of the book to Robin and Phil, whom he described as "the nicest people to greet  him on the route."   I wasn't there that day, but apparently Robin and Phil were so gracious that their photo appears in the book with a very kind comment.    Good to know that my place is being so well-watched when I'm gone. 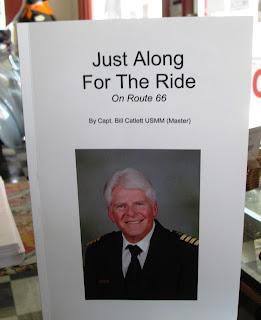 My good friend Joe Paul stopped in with his wife Glenda and son Tyler.  They thought the concert was today, but their mistake was fine with me because I got to chat with them for about an hour. 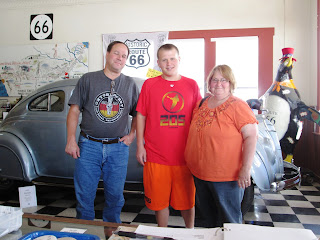 I can't wait for tomorrow!   You'll hear all about it as soon as I recuperate from the excitement!
Posted by Laurel at 5:52 PM