You all know that Afton Station (logically!) is in Afton, but newer readers might not know that I live in Tulsa.  It's 85 miles, door-to-door from my home to Afton.   When I first moved to Tulsa, I was just short of appalled by the city's disinterest in Route 66 and many of its residents who were ignorant of the fact that not only does Route 66 roll right through the center of town, but that Cyrus Avery, called "The Father of Route 66" once lived there!  Things have vastly improved since then, and now I'm proud to say that Tulsa has become a true, 1st class Route 66 town.   This is due, for the most part, to the slow-but-steady awareness of the Mother Road by folks in city government as well as those of us who call ourselves "roadies" and continue to push for improvements in signage and recognition of many  of the important Route 66 landmarks in the city.

Now, here's where this little essay may turn to a case of patting myself on the back, and I do so with little or no apology.  In 2002, a group of Route 66 enthusiasts, including myself, invited David Knudson, head of the National Historic Route 66 Federation, to travel to Tulsa from California, look around, and consider the city as a potential site for the 2004 International Route 66 Festival.   He came, he was impressed, and we were impressed by his enthusiasm.  By the time he left to go home, he was sold on Tulsa.  After that, there was never any other city considered for  the 2004 Festival.

So our little band of Route 66ers started to have weekly meetings (almost every week for two  years!), and hired a PR firm which already loved Route 66 so much that they worked for a pittance, to give us guidance on how to pull this off. And, in June of 2004 we managed to present a large and amazing Festival attended by thousands.  I was chairman of the whole thing, although that was almost an honorary title since there were many -- probably hundreds -- of folks who did far more than I did to make it a success.

On the last night of the Festival, we arranged to have "66" light up on the largest building in town.  I'll never forget that moment.  I stood there and cried and cried tears of pride.  I was so proud of Tulsa, and I think at that moment I felt that I was finally a true citizen of this wonderful city.  Unfortunately, I was carrying a cheap camera at the time, so this is my only photo of one of the proudest moments of my life.  But to this day, I continue to feel that our Festival was the spark that ignited Tulsa's pride in being a true Route 66 city! 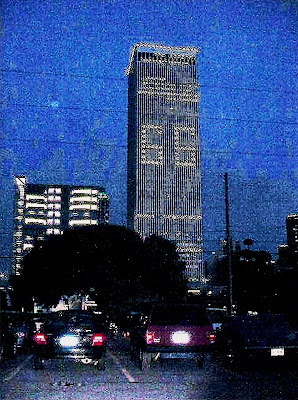 I got a little verklempt at reading this, Laurel! You absolutely should be proud of all the hard work you and other Roadies have done to promote and preserve Route 66. The interest is only growing, and I love to hear someone say, "You can't still drive on that, can you?" Then it's off to the races, as I say, "You most certainly can!" and tell them a bit about it. Word of mouth is great promotion, and you and your group have done a lot to get the word out. Great job!

Thank you, Beth. You, too, are a wonderful ambassador for Route 66 even though you live far from it. It's people like you who will help to keep the mystique alive for further generations. Would you believe that all too frequetly I have folks come in to Afton Station and ask what "this Route 66thing" is all about, even as they are standing on it! Thanks for the kind comments.

I can't top what Beth said. But I do want to add my "Thank You" for your efforts, Laurel.

Thanks so much, Dave!

Laurel, go ahead and pat yourself on the back. You know the old cowboy saying--It ain't brag if it's fact!

A well-deserved pat on the back, and the momentum has certainly been in a positive direction for continuing to develop and promote Tulsa's RT66 resources! I thought the 2004 Festival was one of the very best ones, especially for being held in a large city. I didn't know about the building being lit with "66" but that's a neat image!

It bugs me when people I know who love to travel and drive know NOTHING about Route 66. Until recently, I worked at the Federal Aviation Administration in Oklahoma City. Every spring I'd get a bundle of Tour Guides and take them there and put them in the break areas. They always disappeared. But many of my coworkers knew little or nothing about it.

Trevpr -- That the Trip Guides disappeared is probably a good thing, even though you don't know specifically where they went. I'm sure they were glanced at, and maybe even read. Every little bit helps.