I love National Public Radio.  It often keeps me company as I drive to and from Afton.  But I also love Howard Stern, who entertains with totally bawdy content on other days.  You could say I have eclectic radio tastes, I guess.  People don't realize how many down-to-earth shows exist on NPR.  Listening to shows like Car Talk, Wait Wait, or This American Life are lighthearted ways to learn a little more about the world.  On the other hand, most people don't realize how smart and sensitive Howard Stern is, something one gradually understands after listening for years. He's not all sex and potty humor. He has a lot of good, sensible, and accepting views on life.  I love my car radio!
__________

Well, now that I've got that off my chest, here's today's report on Afton Station. It's 1:30 and I'm taking my first break of the day. It started as soon as I arrived  and kept going until just now.  Thankfully, Marly came by so I captured him and held him hostage so he could help out.  He's such a good guy and he's so great with the visitors. 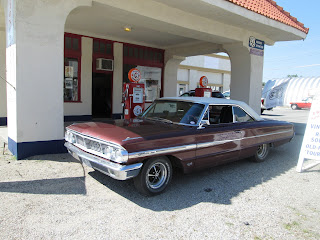 This '64 Galaxy belongs to our first visitor and his passenger, two brothers from Kalix, Sweden.  He bought it in Wisconsin and they're driving it to Los Angeles, after which it will be shipped home to Sweden.

Ok, I'm home now, and the afternoon was equally as busy as the morning.   Marly eventually had to leave, but I stayed to greet 6 folks from Faenza and Cesene Italy on motorbikes, guests from Muskogee OK (he is restoring a '47 Packard!), LaBrea CA, Ft. Worth TX, Las Vegas NV, Vinita OK, Belo Horizonte Brazil, Burlington OK, and Yukon, OK. 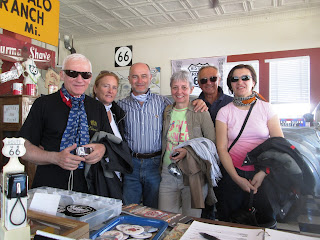 Here are the six folks from Italy who arrived on motorcycles.  Fortunately they were riding on one of the "cool" days here. 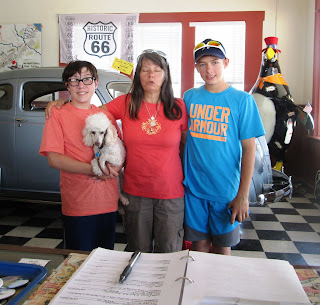 This is the family from Burlington, Oklahoma.   They are spending July 4th week at Grand Lake, and . . . 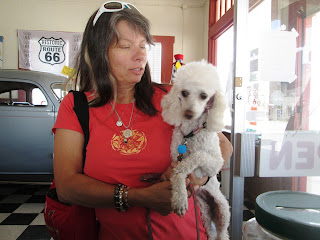 There were 34 visitors in all, which is a big number for a Tuesday.   This bodes well for the rest of the month.  I would like to break the record for number of visitors, which is now held by June 2012.    We WILL be open on the Fourth of July, so please stop by if you're in the area.
Posted by Laurel at 5:31 PM