Yesterday, because I had to be at Afton Station, I missed a very interesting and historic event which was taking place in Tulsa. For some time now, Tulsa's Red Fork neighborhood has been anticipating the arrival of a train -- yes, three cars of a full-size train -- to be displayed in the Route 66 Station park there. The park already houses a model of an oil derrick and a sapling cut from the historic Council Oak tree, with more to come. Thoughts from a Route 66 Business Owner: Withdrawals

In order for the train cars to be moved from the tracks across the street to the park itself, it was necessary to lay a temporary rail line across Southwest Blvd., which is Route 66. This had to be done in an expedient and professional manner in order not to hold up traffic on this main artery for any longer than absolutely necessary.

It was my great fortune to have a friend, Susan Yates, attend the event and furnish me with photos and her narrative. Some of her thoughts are below in italics, along with a few of her photos. 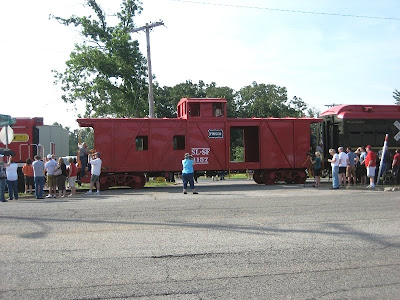 "I arrived at 8. This train runs on time (its own time). The first transfer—the little red caboose and the pullman car came down the track around 9. It took about half an hour to move the cars inch by inch across Southwest Boulevard and park them behind the derrick. Then there was a very long wait for the engine and coal car to be brought from its storage place at the Holly Refinery. That move across SWBlvd/66 took about 2 hours. 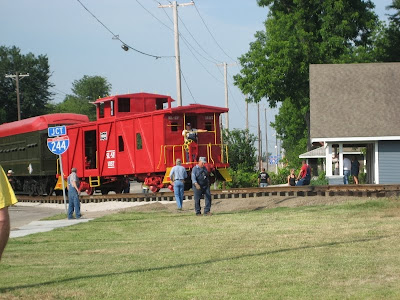 "The engine is much heavier than the other cars and if I understand correctly the ties in the temporary spur line were depressed by the engine’s weight and one (or more?) of the smaller guide wheels wasn’t making proper contact with the track. They didn’t dare move it more until that problem was resolved. The railroad guys were very careful about this, greasing wheels and using a caterpillar front loader to push the engine from the side. The last dozen yards took more than an hour—breath holding time for most of that hour. 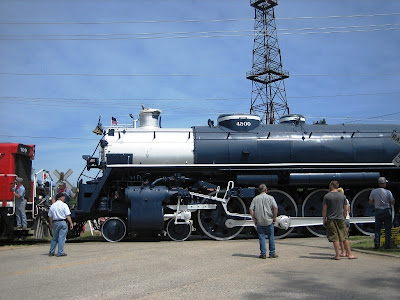 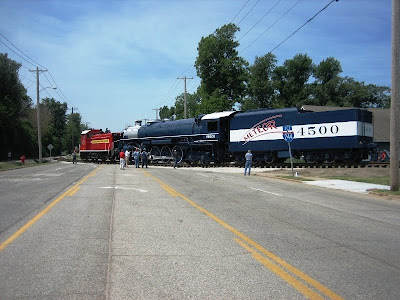 "So there you are—the day that traffic stopped on Route 66 in Red Fork, Oklahoma to let a train cross the road. I believe that for much of 66 through Oklahoma there’s a train track or two running parallel to the highway, but at this point on this day a train took a relatively gentle 90 degree turn (maybe more like 45 degrees) and crossed the Road. It was a sight to see."

I must add that it was a very, very hot day yesterday, and Susan actually required medical attention for the effects of the heat. She said that despite the weather, there were several hundred spectators who stayed for hours to take in the spectacle.
More good articles and videos can be found at Train arrives at Route 66 Station « Route 66 News and Video Landing Page - KTUL.com - Tulsa, Oklahoma - Coverage You Can Count On.

I learned my lesson. Standing in direct sun for four hours and drinking nothing is a bad idea. I won't be doing that again!

The train looks right at home on its new track. Can't miss it if you're traveling on 66 through West Tulsa. It can also be glimpsed from the Red Fork Expressway (I-244). Look for the derrick and as you approach it you'll see the very bright red caboose.