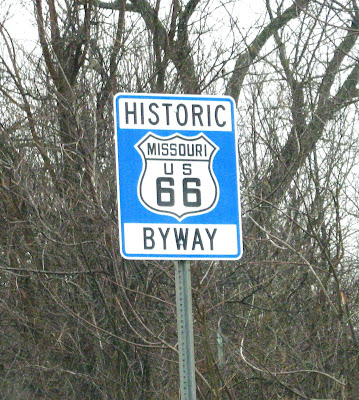 Because I just got home, and because I have a lot to tell and quite a few photos to go through, I'll give my Saint Louis report in two parts. I'll write until I faint or fall asleep today, then finish up tomorrow. Right now, I'm hungry, thirsty, and weary. I drank so much fluid over the weekend (a big no-no for kidney patients!) that I'm finding it necessary to fast today. I'm so thirsty I can't spit, as they say. But you know what? I wouldn't have traded it for anything in the world. I had a great little trip, loved seeing my "kids", saw plenty of St. Louis, and did quite a bit of free-range eating on The Hill.

I got a taste of my own medicine on Friday morning. In Paris Springs, MO, I had planned to stop and finally meet Gary Turner in person. I've talked to him quite a few times on the phone, but so far this icon of the Mother Road and I have never been at the same place at the same time. Unfortunately, it wasn't to be this time either. :-(
Gary is the much-adored owner of Gay Parita, a re-created Sinclair service station on an old alignment of Route 66. Built by Gary and his son, it serves as an "office" for Gary to meet and greet visitors, and he greets lots of them! Home Page He has so much information and memories from his life on 66 that sometimes travelers are two or three hours late getting to Afton Station because they're so fascinated by Gary's tales. But alas, there was no Gary for me today. The place was shut up tight and although Gary has been known to come down from his house behind the Station when he sees visitors prowling around, that didn't happen this morning. I sensed that perhaps I was there too early (9:15 a.m.) so I didn't pound on his door, honk, or make any other commotion. I just snapped a few photos and went on my way. Now I know how it feels when travelers come to Afton Station and I'm closed. Ugh! (It was a gloomy weekend, BTW, so all photos will be correspondingly gloomy. I'm just letting you know now.) 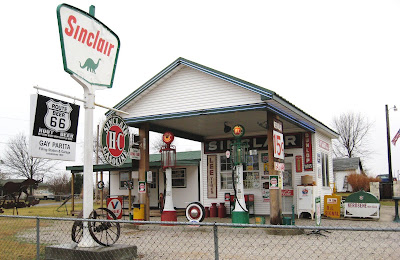 I stopped briefly in Halltown to check out some of the picturesque old buildings in this "almost ghost town", before getting back on the evil Interstate in order to make some time in getting to St. Louis. 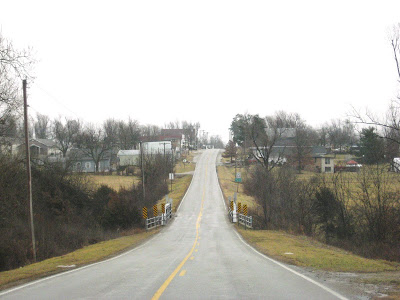 The road between Gary's place and Halltown 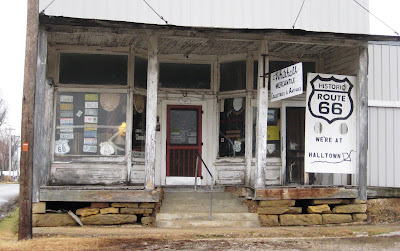 The store in Halltown 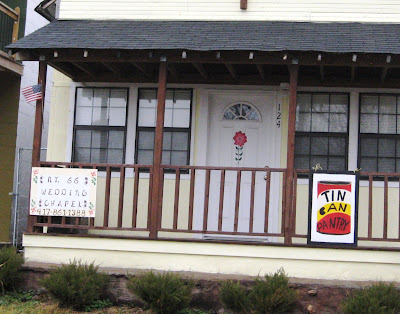 When I arrived at the hotel, Sarah and Matt were already there (they came in the night before), thus we embarked on a weekend of ....well, I admit it..... mostly eating. Our Drury Inn was conveniently close to The Hill, the St. Louis Italian neighborhood, jam-packed with some of the best restaurants anywhere. For lunch on Friday we chose Greek, however -- amazing Greek salads, the best pita bread ever, and beautifully-seasoned giro meat on top. Since Sarah and Matt had spent the morning at the City Museum, they were tired after lunch and wanted a rest, so we just lolled around the hotel for the remainder of the afternoon, gearing up for more eating in the evening.
For Friday dinner, we wanted to go a little bit light since lunch had been large, so we chose Guido's Pizza and Tapas. Yum! We leaned heavily on the tapas, which were great and adequately filling. The sangria went down real easily as well. Knowing that the next evening we would be gorging at Charlie Gitto's, we tried to be conservative. We weren't.
On Saturday we spent most (but not all) of the day at the Missouri Botanical Garden, which was one heck of an amazing place. I'll write about Saturday tomorrow, so stay tuned.

To bad about Gay Parita, maybe next trip. Sounds like you had a nice trip, looking forward to the botanical :o)

It is too bad that you missed Gary Turner, what a great guy, in fact on Saturday afternoon - Gary telephoned here to just talk about the weather, etc. Robin and I always enjoy talking to Gary "The fact is our stop in the spring of 2009 at his Sinclair Station was one of the reasons for our month long fall trip on the Mother Road."

As to the Whitehall Mercantile in Halltown, Mo. new web site

The daughter of Jerry & Thelma White has put up the new site, through e-mails the daughter imformed me that Jerry & Thelma moved from a town nine (9) miles north of our Ma & Pa Motel here at the Lake of the Ozarks to purchase the Mercantile in 1996. Because of the web site, we now know the hours of operation - the first warm day we plan on a short trip to see everything they have to offer. And Yes, stop and see Gray again.

Laurel, Also glad to read that you had a great time in St. louis with the family, it would that weeks to see and do everything in that area. Robin and I are from Alton, IL.just north of St. Louis. One of the last places we visited before our moved here about nine (9) years ago was the Transportion Museum and view the display of the Coral Court Motel that was completed, Shellee Graham did a good book about this old landmark.