This is Oklahoma, where it can be the Arctic Circle one day and a beach in Bali the next. I guess that's why it's possible for me to have a full-blown case of Spring Fever in mid-January. I woke up rarin' to go this morning, so. . . I went! I started with the mundane chores -- bank, gas station, grocery store -- then decided to get lost. I'm good at intentionally getting lost. Just tell me to "get lost", and I'll gladly obey. By the time I'd finished the chores, the temperature was almost 60, and to assuage any guilty feelings about not going to Afton Station (we're still officially closed on Tues. and Thurs. until February), I took off down a road with which I wasn't very familiar. There aren't too many of those left. I've pretty much exhausted all the roads leading to, from, and around northeastern Oklahoma, but I managed to find one today.

You can go on to other things if you're only interested in Route 66, because I wasn't anywhere near the Mother Road today. Don't ask me where I was, actually. I was out in the country a lot, and I did eventually find myself in some towns I'd been in before. I just don't know how I got there.
I skirted Wagoner and took this photo of their old railroad station. It appears it was once used as a restaurant, but now it's completely closed. It got me to thinking about the beautiful old depot in Afton that was demolished some years ago. If the photos I've seen of it are accurate, it would have made an incredibly picturesque restaurant.

I drove through the towns of Coweta, Rocky Point, and Mazie, crossed the McClelland-Kerr Canal, and finally found myself in Choteau, which is a town known for it's Amish population. It's the place where Betty buys that awesome Amish butter for me. I should have bought some for her, but since I won't be seeing her for over a week, I decided it wouldn't be a good idea. I did visit the Amish Cheese Shop, however, and couldn't resist some corn relish and pickled cauliflower. { Amish Cheese House -- I still amuses me that the Amish have a website. } 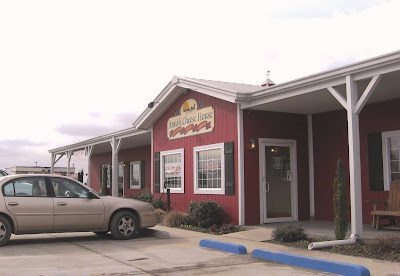 There are two great googie signs in Choteau, obviously crafted by the same sign maker. Unfortunately, they are both in bad shape, but still worth a photo or two. 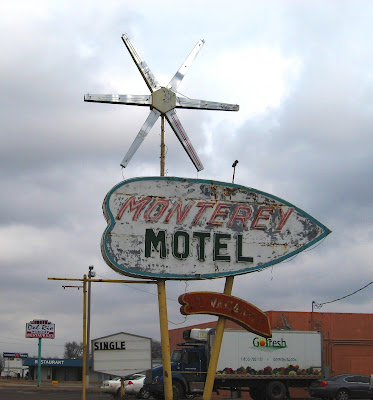 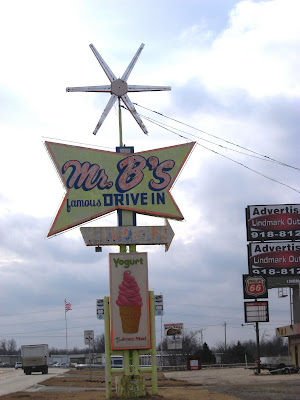 Having wasted (no, not wasted. . . enjoyed) many hours on the road, I headed for home after that. I have to start getting ready for my weekend trip to St. Louis to meet my daughter and son-in-law for fun, awesome Italian fare on The Hill, and maybe a museum or two.
__________
If you've been following my frequent mentions of Picher,OK and the toxic chat piles which were one of the causes of the recent abandonment of the city, you might wish to read this. Toxic waste will go to Kansas NewsOK.com. Because the use of toxic waste is illegal in Oklahoma, the chat will be sent over the border to Kansas to mix with hot mix asphalt to pave roads there. The EPA suggests that it might take another 30 years, however, to clean up the entire area.

Before she headed home after her jaunt today, she delivered to my house a big bag of cheese curds. Yum! Thank you Madame Laurel!