There is a man. . . a 71-year-old man. . . running . . .yes running. . . Route 66 . . all of Route 66 . . . this summer. So as not to expose you to excessive verbiage here, I'll just lead you to http://tinyurl.com/laxm2u for details. Since I knew he was roughly in the Afton area this week, I've been keeping a lookout for him so I could invite him into the Station for a cold drink and to offer my admiration. So. . . this morning my trip to Afton took place in a teeming. . . no, blinding. . . thunderstorm. On the way out of partially-flooded Vinita I caught sight of an older man run-walking, swaddled in clear plastic, being splashed by oncoming cars and surrounded by lightning bolts. I was traveling east and he was going west. Thinking he might be the gentleman in question, I decided to drive to the closest place to turn around and go back to meet him. To make a long story short, I quickly figured out that it WAS him, since I knew he was being shadowed by his daughter in a car, and I saw a car with an Illinois license tag waiting up the road. Alas, by the time I got turned around, after being caught at a long red light and major construction, the last I saw of them was the daughter's car driving past me, with him in it. I tried to catch up, but lost them in Vinita. So, all I got was this picture of the car as it went past me in the rain. . .and VAST admiration for the senior citizen who has the guts to do what I wouldn't be able to do in a million years. 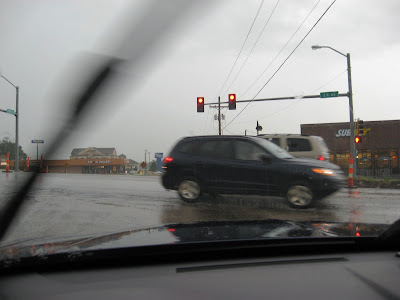 Talk about gutless! I had a call yesterday from the NPR reporter who interviewed me a few weeks ago. He said the show would be airing this morning. This tiny bit of information threw me into a ridiculous state of angst, and I spent time tossing and turning last night worrying. Did I say something wrong? Give erroneous information? Did he edit it to make me sound like an idiot? Or do I not need bad editing to sound like an idiot? Well, I listened to the show this morning, and if I do say so myself, I did pretty well! It turns out only two of us appear in the show, and the other interviewee is the famous Route 66 authority (and my friend) Jim Ross. If you'd like to hear the interview (never fear, it's only 3 minutes long, and you get to hear my melodious voice and marvel at my erudition) you can hear it at: KOSU: Why Route 66 still matters (2009-07-30)
The rain let up about midday and we had a lot of visitors, 23 in all. Ron Jones arrived to surprise me, but could only stay until about noon. We played host to the following:
- The road crew that resurfaced our road last week. They are from Tahlequah, OK but had to be back in the area today to finish up some tasks, so they took some time to come in and visit.
- Foreign visitors from Paris France, Norway, and Zurich Switzerland.
- Others from Bella Vista AR, Hutchinson KS, Tucson AZ and Grove, OK.
- My friend Mike from Baxter Springs KS with news from the Kansas Route 66 front.
- A family from S. Dakota with two cute little boys. 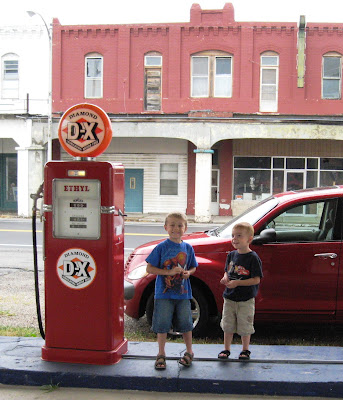 Now, check this out. I took this picture from the car as I was driving to Afton this morning. It was raining so hard there was almost no visibility. When I looked at the photo later, I found this. I have no idea what it is. Looks like a car on fire with black smoke billowing from it. No such thing happened. I guess it's some sort of optical illusion. 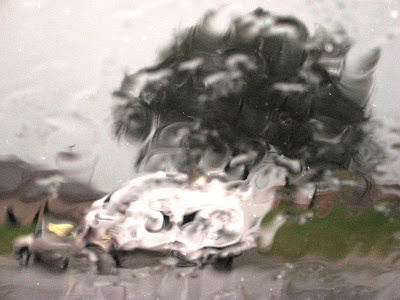 Laurel, you did a great job!!! I posted it on Facebook AND Twitter. :) I like your perspective of while preserving the old Route 66 businesses, we also need to support those of the new Route 66. That shows that although decommissioned, it is still a vital road and a thriving "community."

That last picture is freaky--it DOES look like a car on fire, in an Impressionist painting!