I didn't intend to visit a museum today. I really didn't! But free mornings are precious to me these days, and I decided to spend this particular one driving up to Catoosa (on Route 66, of course) to photograph a brand new mural on the side of a small but apparently well-established museum which, believe it or not, I'd never visited. Until the new mural was painted, it was so unobtrusive that I simply never bothered to stop. This morning, it was early and I didn't expect it to be open, but as I arrived, so did an older gentleman in a truck who was just opening up and invited me in. And that's when the fun began! 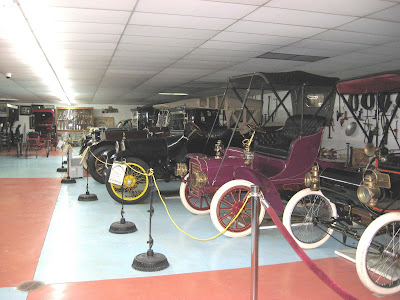 The Correll Museum (19934 E. Pine St., Catoosa -- a few feet off Route 66) is the private collection of Mr. D. W. Correll (now deceased), which is currently tended by a curator who was absent when I was there, and by Chuck Tapley, who gives tours to those of us who are lucky enough to show up on the doorstep. Chuck was gracious, friendly, chatty, and very well-informed. 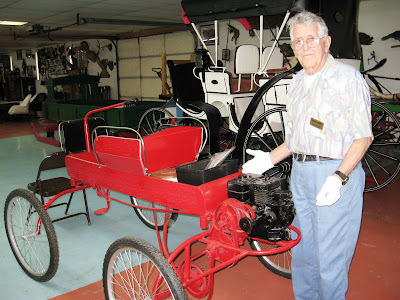 In some respects, the Correll Museum is similar to Afton Station, in that it's the private collection of one person (although it's now owned by the City of Catoosa) and it's free (donations happily accepted). In the main building, which is the only one I visited, there's a very nice collection of about a dozen automobiles ranging from an early electric car to a 1949 Dodge. Naturally, my interest was piqued mostly by a lovely old Packard Twin Six. Along with the cars in this building, there are also buggies and other unusual transportation forms, a small collection of antique cookware, and lots and lots of old tools. In the other two buildings (which I skipped on this visit) are a rock collection and a bottle collection. 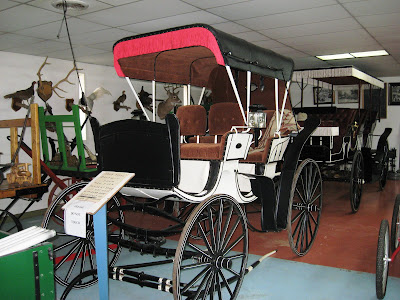 Judging from my conversation with Chuck, I did not get the sense that any emphasis is given to Route 66 in this museum, and I think that's a shame because I know their visitor traffic would increase by multiples if they got some publicity within the Route 66 community. I plan to return soon to talk to the curator about exchanging brochures and links. Maybe this blog entry will stir up a little curiosity. It's a fine museum, and I think it would appeal greatly to car people and history buffs. D.W. Correll Museum The link here will give hours and days of operation.

Now for the bad news..... Driving out 11th Street (yep, old 66!) and passing this head-turning sign for the umpteenth time reminded me to mention a very disturbing article that appeared on the front page of the Tulsa World on Saturday. 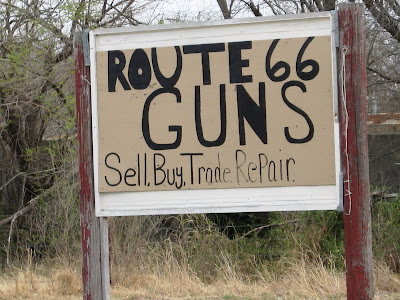 Last week, a Tulsa man and his son enrolled in a gun safety class because the son had raised his grades high enough to be rewarded with a hunting trip with his grandfather. His father wanted him to learn gun safety rules before he went on the trip. On the first day of class, before doing anything else, the teacher (who was a volunteer) asked if anyone in the class had supported Obama in the recent election. Several people, including the father (a former Marine) and his son, raised their hands, at which point the teacher ordered all of them to leave the class immediately and not return -- because he refused to teach liberal supporters of "the next thing to the Antichrist". Are you kidding me????????? I've been incensed all week, and I can't stop thinking about the incident. Gratefully, the volunteer teacher was "fired", and I'm not sure anything more can legally be done about it, but to me it says a lot about a certain mentality that exists in this country these days, and what it says is NOT good! No matter who or what one supports, this is still a free country -- isn't it? Details here:
Tulsa World: Hunter safety instructor removed after ordering 'liberals' from class

Sooo...where is the picture of that beautiful mural?

I forgot to mention that I couldn't get a photo of the mural because it's on that rather heavily traveled road (as you know, Ron) with no place to pull over. I made two passes, but there were cars behind me both times and I couldn't slow down. Maybe next time you're with me you can lean out and take a picture.

Thanks for the tip! I have to visit that museum sometime!

As for the gun safety teacher, he should get the boot! I am a gun owner, hunter, and an NRA member. That class was no place for politics. It was to teach gun safety.

To be fair, it seems to go both ways. At work, when discussions about politics come up, I've had multiple Obama supporters gang up on me, shouting me down, and not letting me speak after I gave them the courtesy of listening to them.

Are you freakin' kidding me, Laurel? That just makes me want to explode. Unbelievable.

Okay, bad news reply out of the way. On to good news reply. LOL The museum sounds like a nice little treasure! I think it's a good idea to talk to the owners and try to get a Route 66 connection going. Good for you!

Seems like the guy at the shooting range should be directing his frustration toward McCain's strategists. They'll be studying the 2008 election in poli sci classes for decades to come. Oi.

Hi!
Can I use one of the pictures taken at the Correll Museum to illustrate the museum's entry in my museum's guide here:
http://www.automuseums.info/united-states/d-w-correll-museum