What Constitutes a Perfect Day?

That's a tough question, but I have to say that a perfect day at Afton Station would include a helping of travelers, a helping of friends, some neat cars, and a little bit of penguin shaming.

Since I'm too tired to label all these photos tonight, I'm going to just dump them here and explain them in the morning.  That will cut down on the typos I'd undoubtedly make if I were to try to write a blog post when I'm in this condition.  Just know that my heart is in it but my fingers aren't.  Meanwhile, you could make this into a game by doing your own captioning and tomorrow I'd tell you how close you are to accuracy.
__________________________
Ok, I'm back.  It's morning and I'm ready to caption!   What makes a perfect day Afton Station? First of all, awareness that the farmers' markets have opened!  We stopped at the one in Claremore and then at the one in Chelsea, our favorite.   The peas and the blackberries aren't in  yet, but we got to say hi to this cute baby goat and our farmer friends from last season. 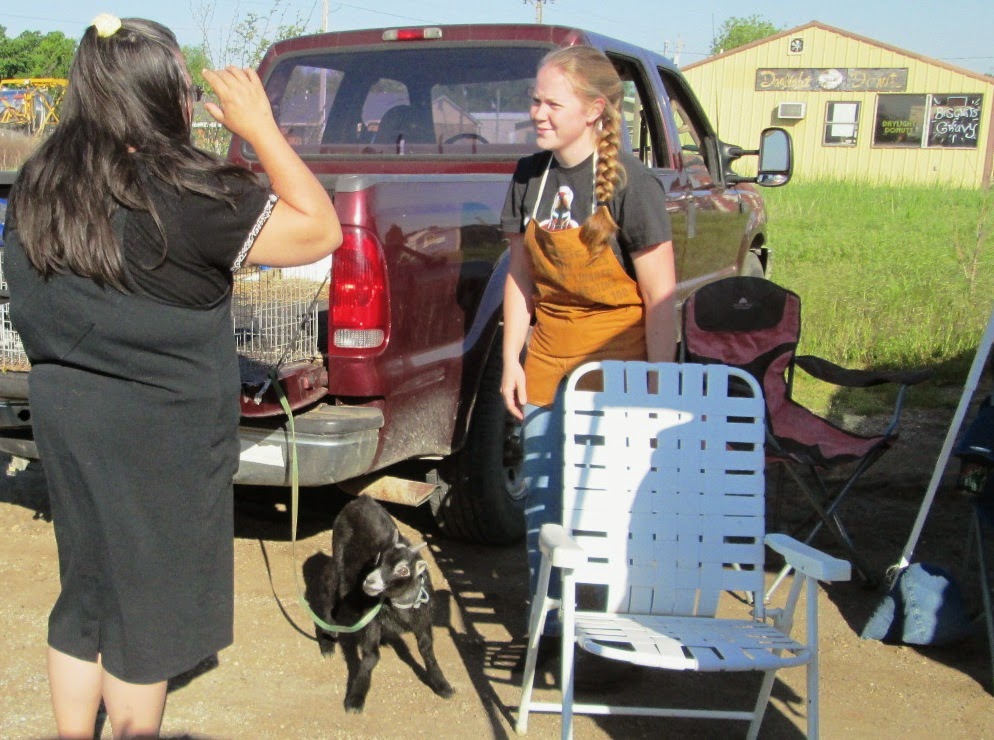 Meanwhile, at the Station, our new t-shirts are in.   They're black, short sleeved, with our Afton logo on front and back. Come 'n get 'em! 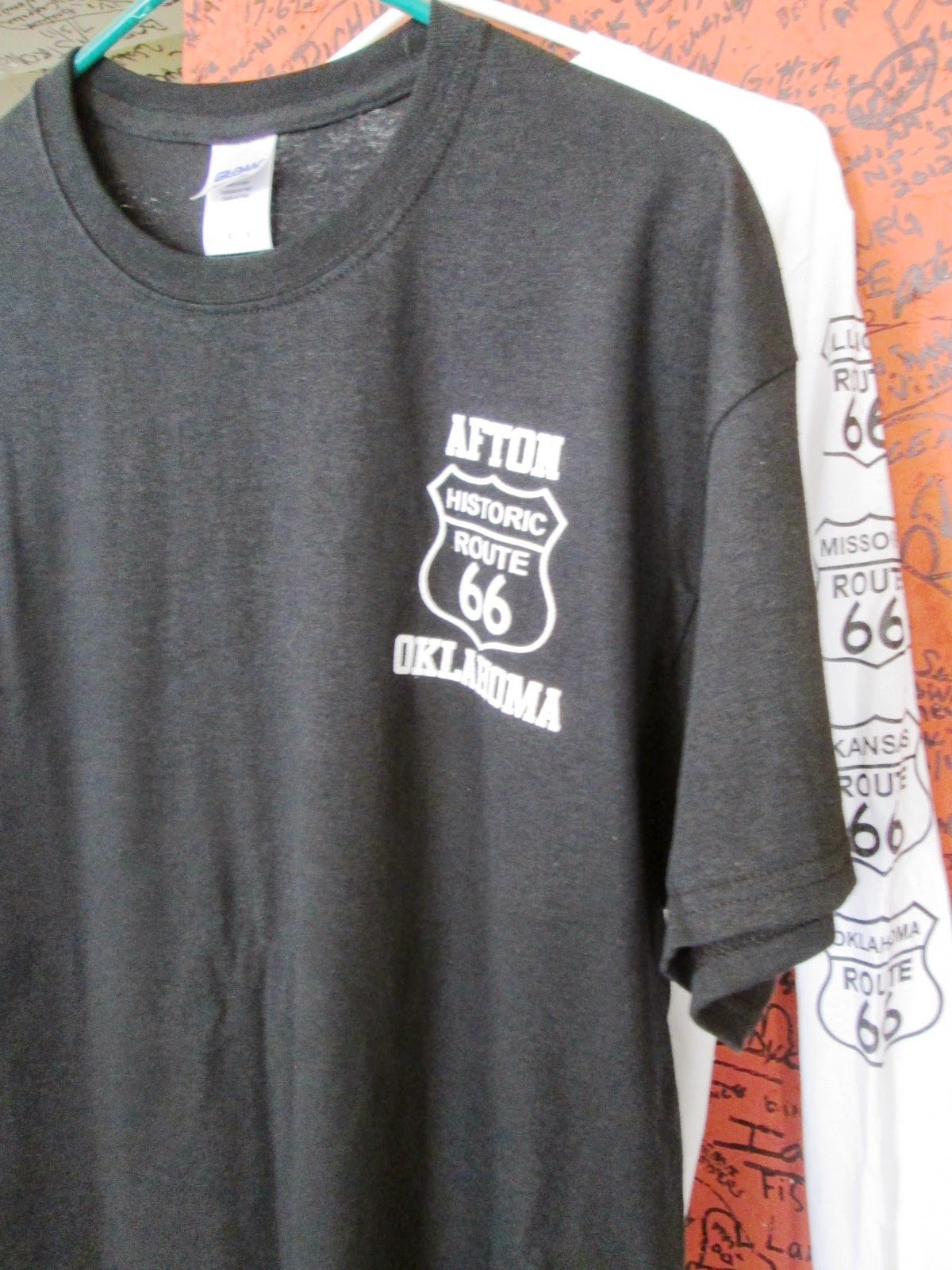 The travelers began arriving soon after, from the U.S. and a few other countries.   This couple, for example, came from Antover, Holland. 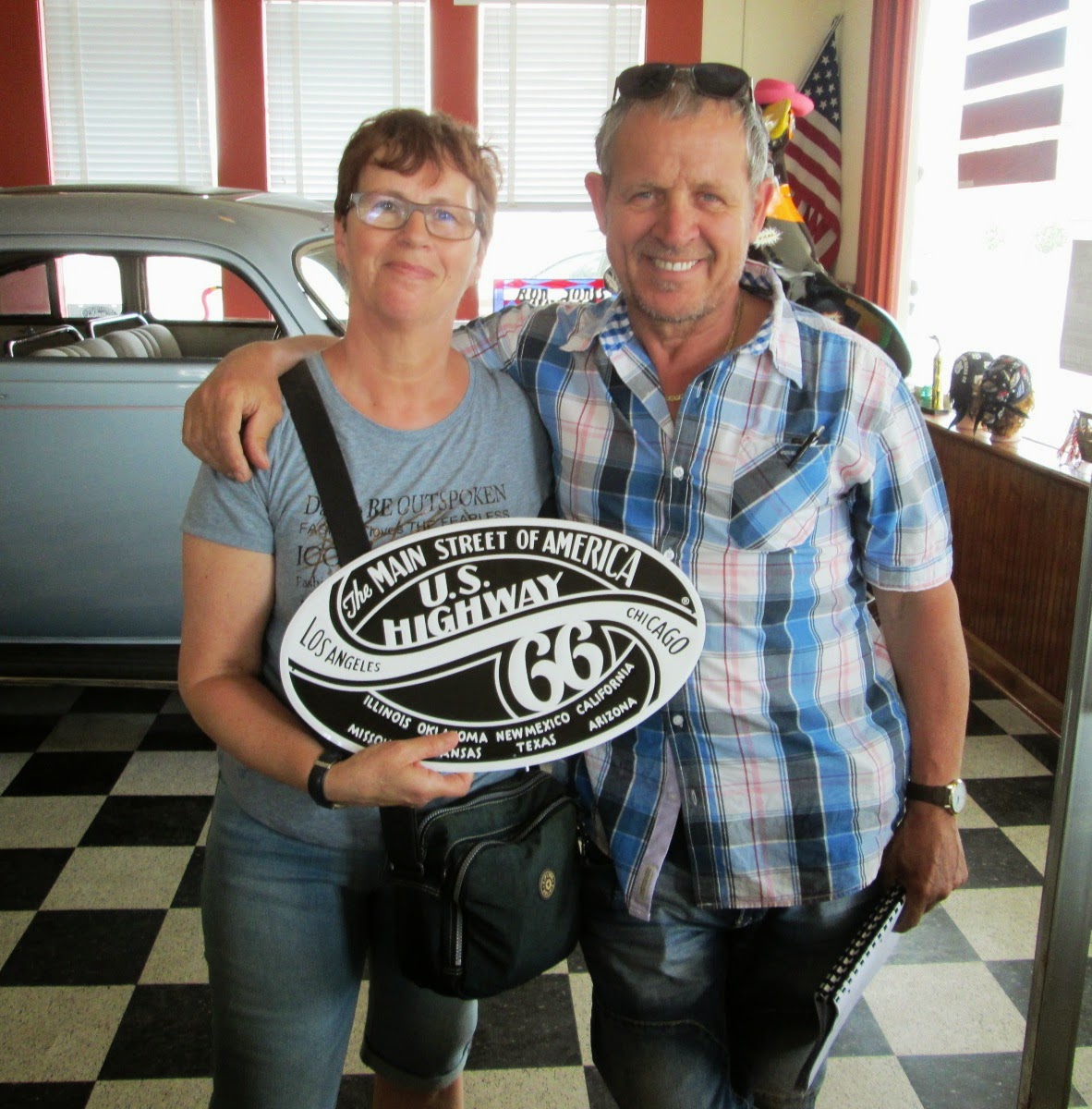 And these from Winchester, Great Britain. 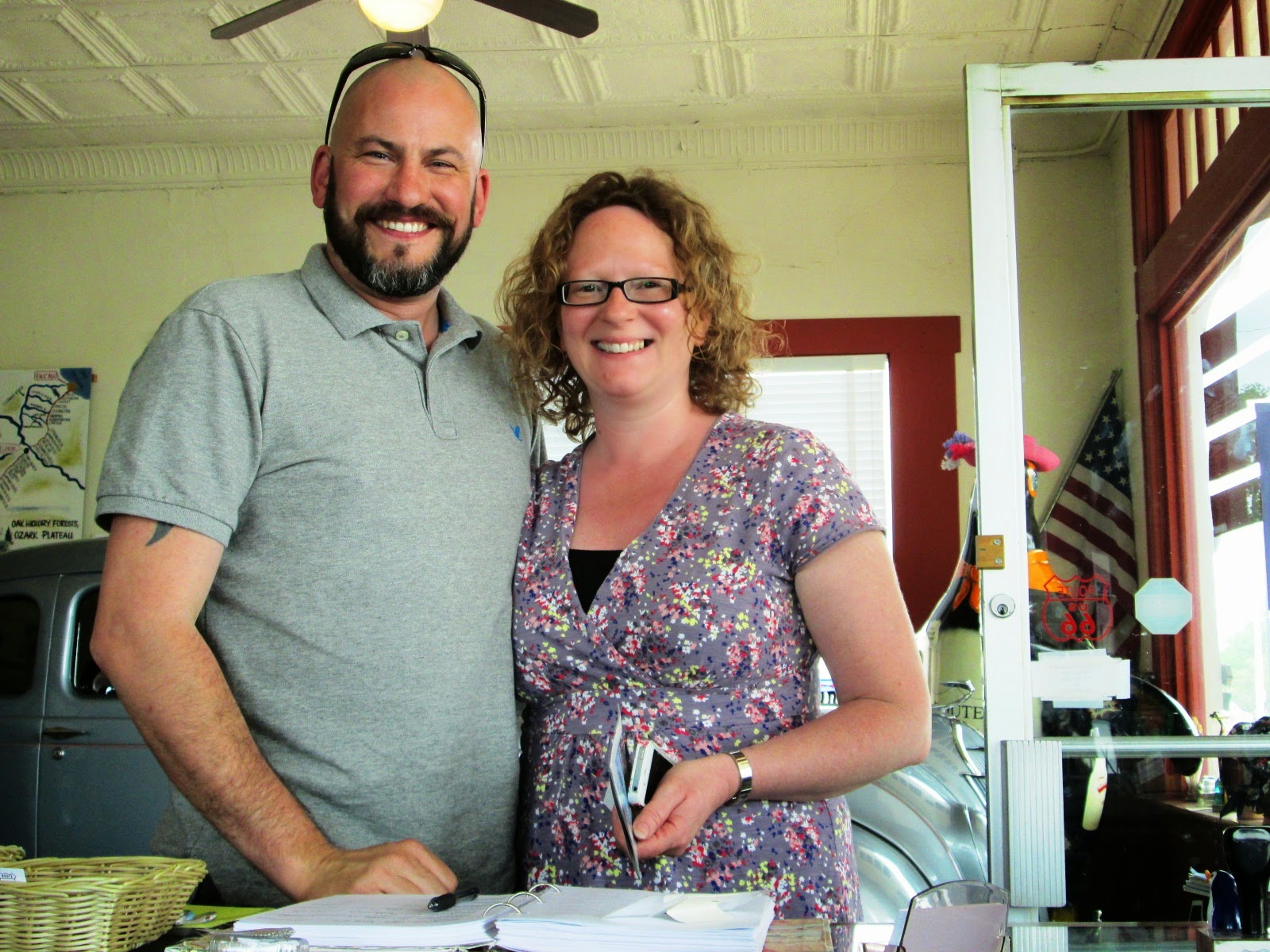 There were visitors from Germany, Ft. Worth TX, and Lansing NY.   A group of 11 from Indiana's 20th Century Chevy group surprised us when they all rolled in together in their.... you guessed it....20th century Chevys!
To top off all this excitement, a few friends stopped in to say hello.  Jim Ross and Shellee Graham made Afton Station a meeting place where they caught up with Mark Spangler from the Lebanon (MO) Route 66 museum (right). 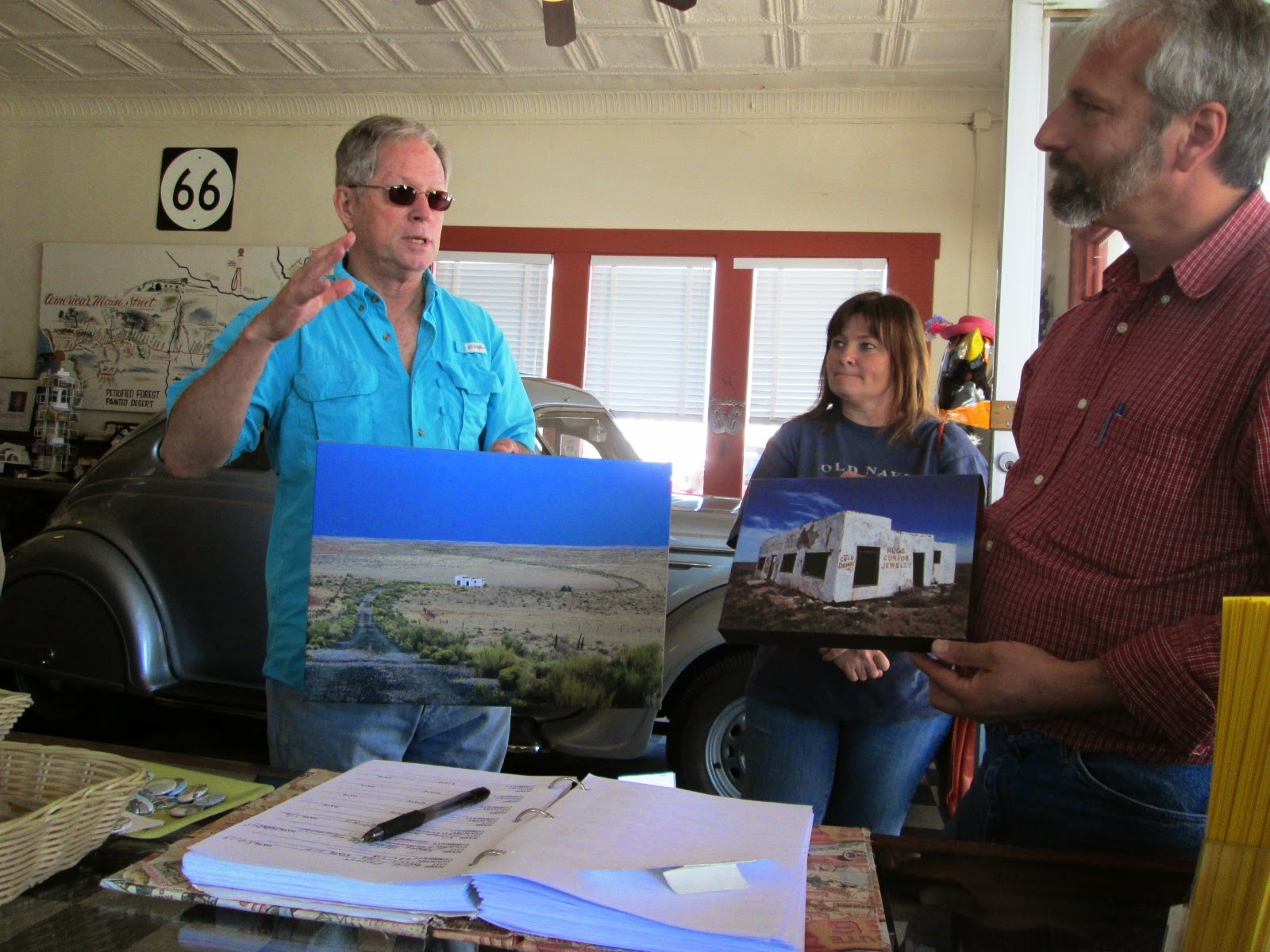 Our friend Christian from Germany (left) also had the honor of meeting Jim and Shellee.and posing for this picture. . 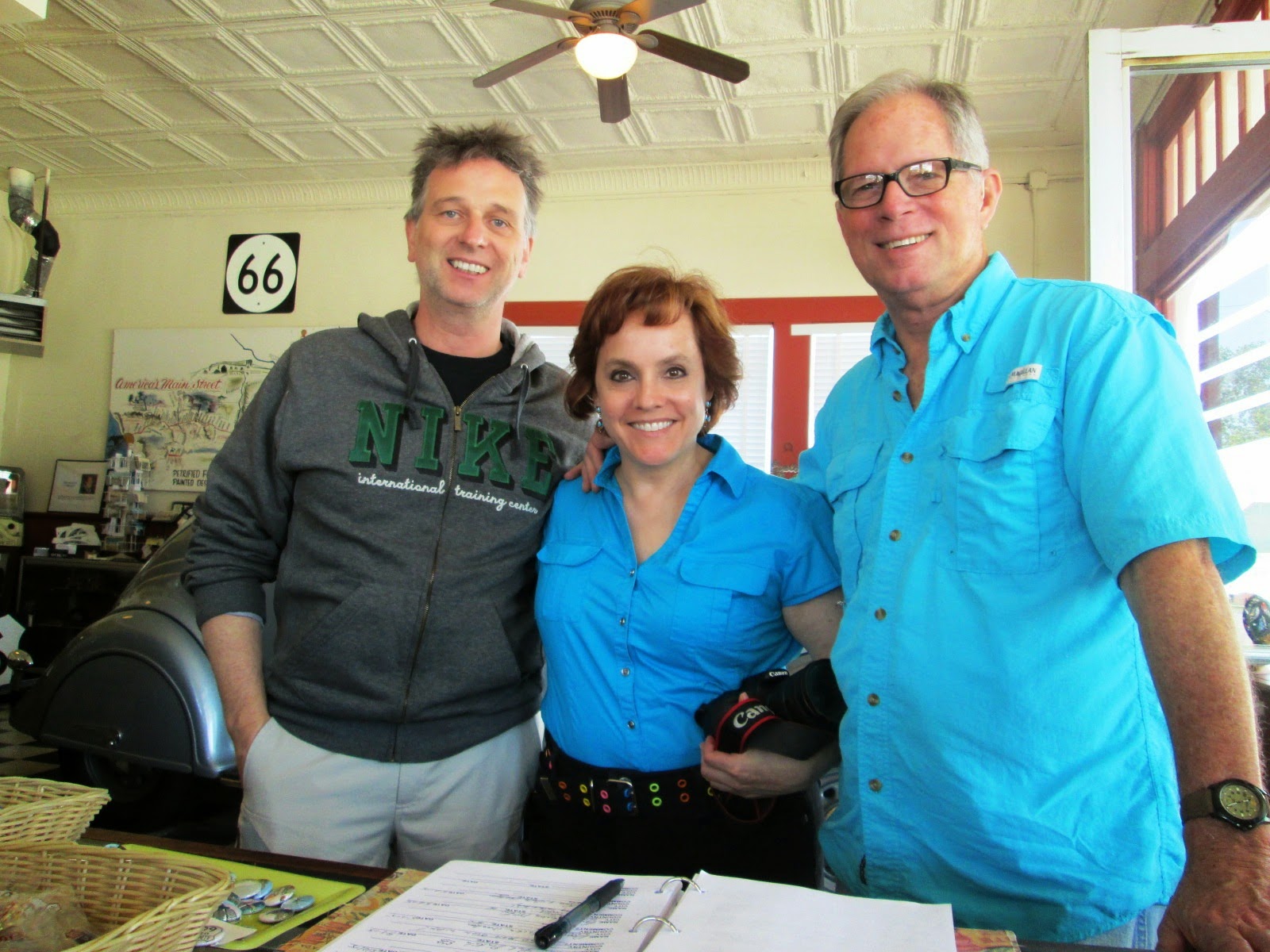 It wasn't long before another friend, Roamin' Rich Dinkela, drove up.  He was on one of his signature "roamin'" adventures, where he tends to find the greatest lost or forgotten alignments of Route 66. As one of the newer Mother Road advocates, he has already made a name for himself in the annals of the road.  He, Shellee, and Jim, who is the king of finding and documenting obscure segments of Route 66, were last seen driving off into the sunset to undoubtedly unearth another amazing find. 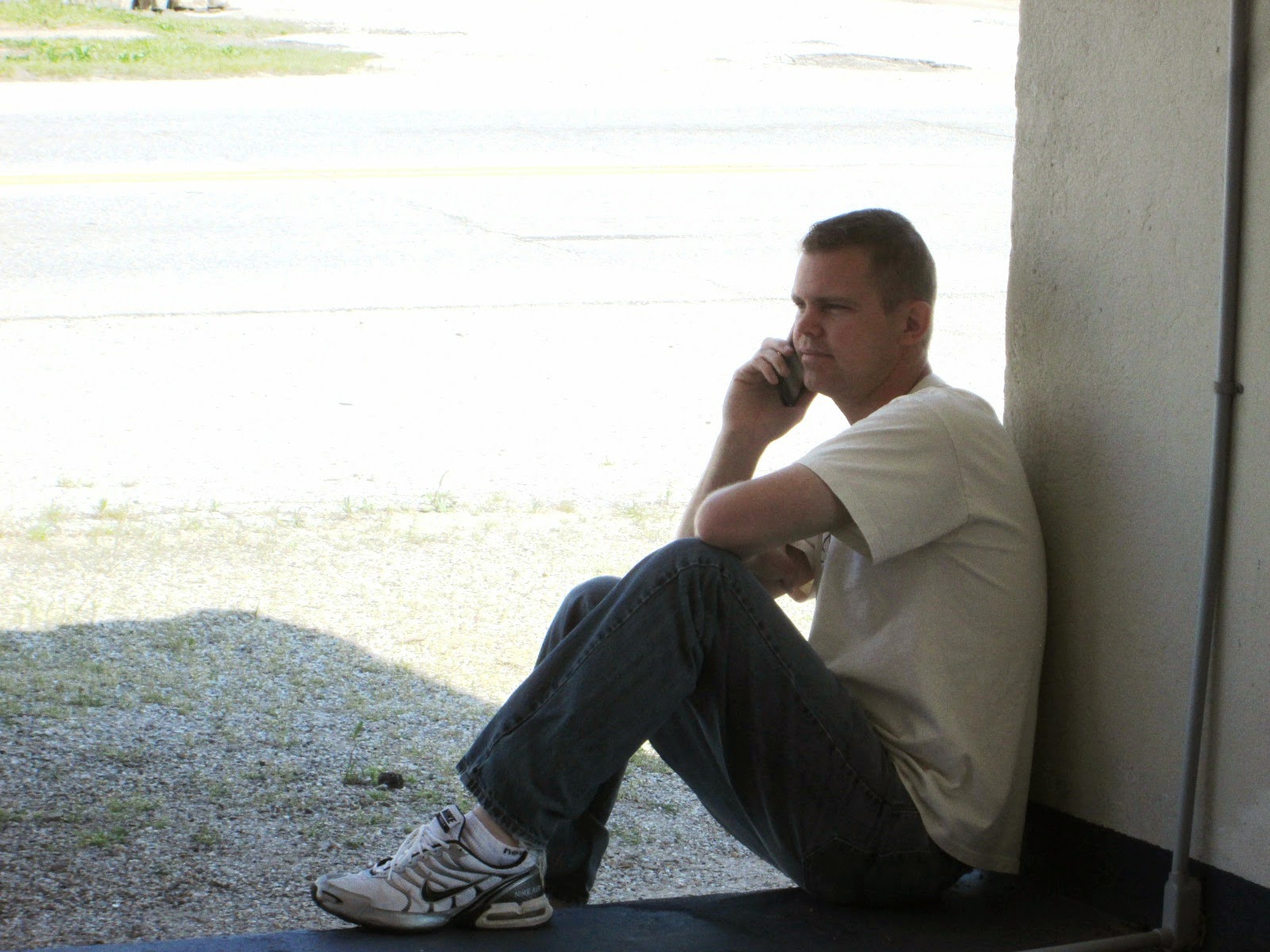 This vehicle is hard to miss.  It belongs to Jess McEntire, another Route 66 guy who has been working for years to raise funds to erect some Route 66 billboards by selling CDs of his music, Route 66 guitar picks, and chances to win one of the neat guitars he's built. 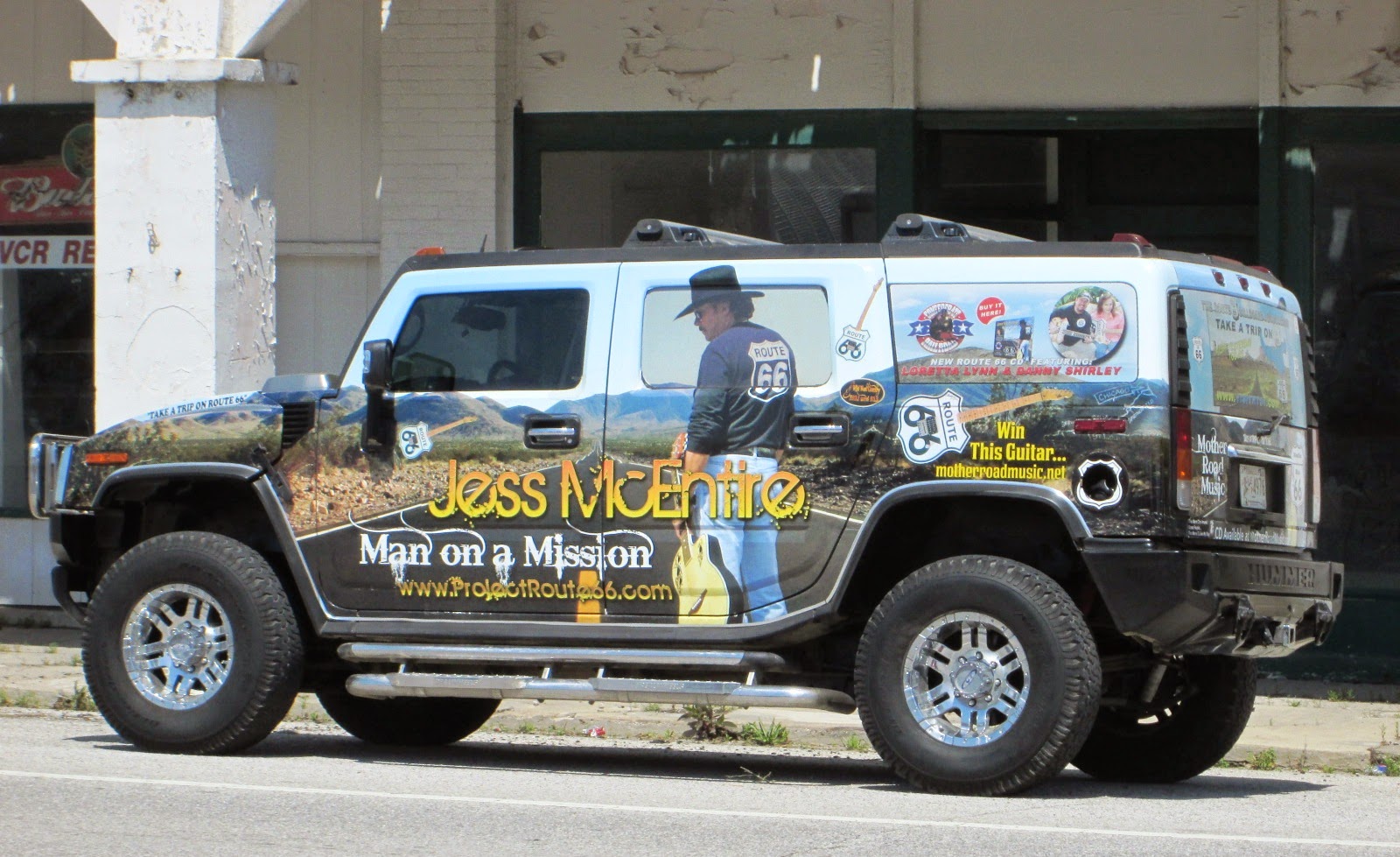 Here, Jess is posing with me just after he had me write my name in big, indelible letters on his forearm.   Jess had a good reason for that, but you'd better ask him about it.  By this time of the afternoon, I was too brain dead to make much sense of it. 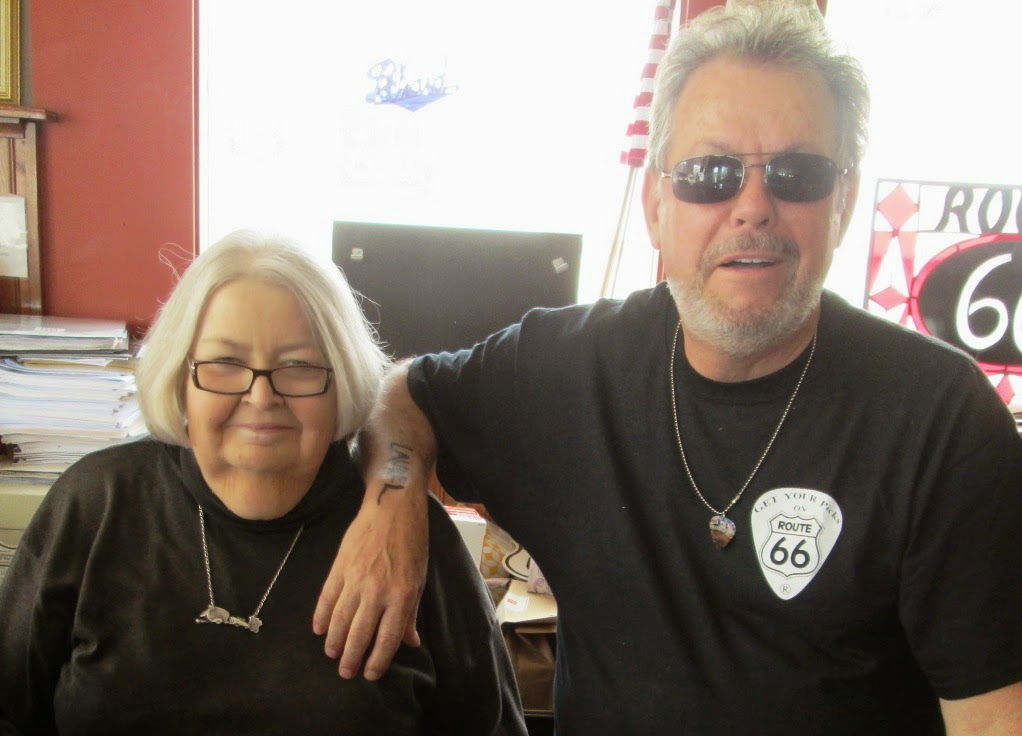 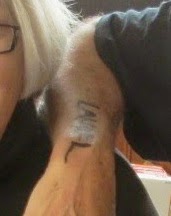 Finally, there's always time for a little penguin shaming at Afton Station.  Poor Tripper, who likes to think of himself as quite macho, was made to wear this beautiful hat in honor of the Kentucky Derby which was run today and which I lost, as usual. 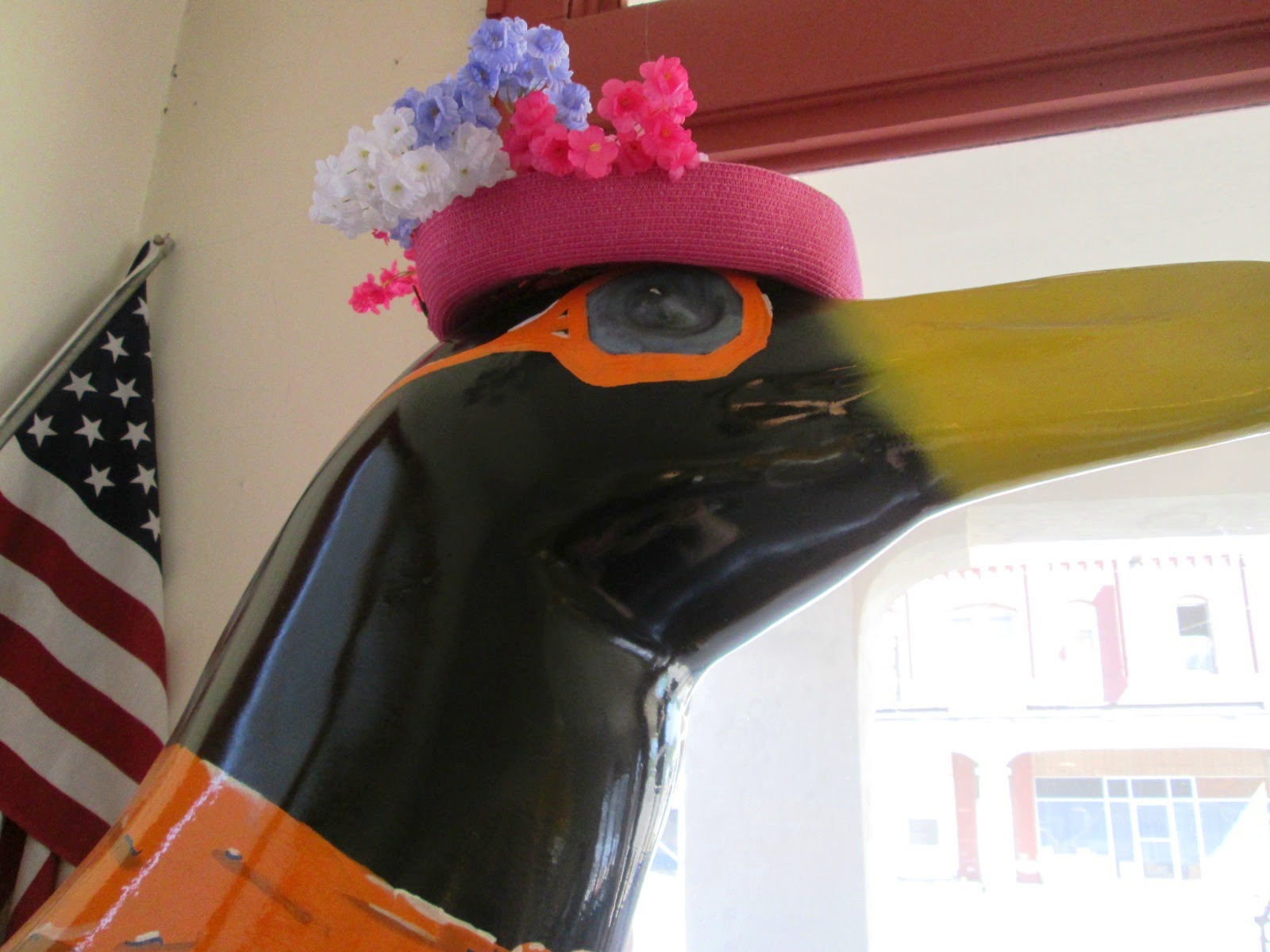 This was the first Kentucky Derby I've ever watched from somewhere other than at home or at the Derby itself.  After leaving  Afton, we met up with friend Denny Gibson from Cincinnati at a restaurant in Pryor, OK.  Denny was taking a little break from a Jefferson Highway Association conference he's attending in Muskogee, OK and was kind enough to drive another 40+ miles for a quick snack and an all-too-short visit.  It was, I must admit, the perfect way to end the perfect day which could only be made more perfect if my horse had come in first. . . .