I'm fascinated by unusual behavior.    With the afternoon off, I felt the need to drive to Broken Arrow (suburb of Tulsa) to check out a phenomenon described in this morning's news.  Another Chick-fil-A has been built in town, and the usual culprits were pitching their tents in the parking lot, in the rain, awaiting tomorrow's grand opening, at which time the first 100 people in line are awarded 52 free meals, one per week for a year.   I do not patronize Chick-Fil-A myself, as I strongly disagree with some of the attitudes and prejudices of their management, but even on my slowest day it wouldn't occur to me to camp out for chicken sandwiches.

If I had observed tattered tents and lean-tos which might have belonged to some of our homeless and  hungry population, my feelings about this campsite would have been different, but these were expensive, large, and for the most part new tents, and their owners were mostly young people, possibly college kids on spring break.

I'm sorry.  I really try not to be judgmental, but this scene made me laugh.... or wince... or maybe even frown.   And since it has nothing to do with Route 66, I apologize. 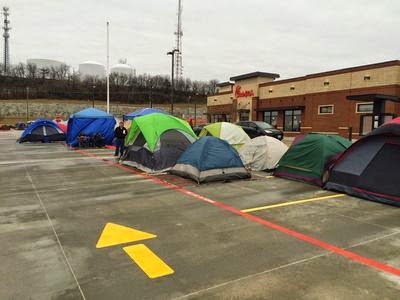 Here is this morning's news report on KRMG, a local radio station, with further details:

"The promise of free meals for a year drew a crowd to the Tulsa area’s newest Chick-Fil-A restaurant.It’s at 71st and Lynn Lane in Broken Arrow. The crowd started gathering as early as 4 a.m. Wednesday for the opening Thursday morning.


The first 100 customers who show up get 52 free meals from Chick-Fil-A.
KRMG found out people travel the country to take part in these openings.
“This is my fourth one.” A camper from Chicago said.
There were people in line who traveled from Texas and even Minnesota.
“This is all they do is travel around the country. They’ve been to 140 or something outrageous.” He added.
Broken Arrow’s new Chick-Fil-A opens Thursday at 6 a.m."

There was a new Chick-Fil-A opening in Branson a couple of week ago. They did that over night thing too. As luck would have it, it was one of those night when the weather was bad, temps almost zero. I thought it the stupidest thing ever.

Wait ... all they do is travel around the country for these? I must be looking in the wrong areas for jobs! WOW....unbelievable.

Well, Miss Dazey and Cort, I think you both hit the nail on the head. Unbelievable and stupid!

Cort, you can stop job hunting. Just travel around with this crew and live on one chicken sandwich per week. Sheesh!