I'm going to report on two days here, since I was in Afton yesterday, something that rarely happens on a Friday.   I arrived there at about 2 p.m. to await the excitement that was to occur later.  As I had indicated before, we were going to host a small band from France and allow them to fulfill a lifelong dream of playing music on Route 66.  The whole event couldn't have turned out better .  The intense heat of the day was tempered by the coolness of the band and its music..  The audience of approximately 50-75 people included Route 66 friends from afar, local Afton folk, people visiting from France, and others.  I was amazed by the size of the audience.  Sylvie, David's wife, provided a dinner for everyone and there was wine, beer, and soft drinks for all.  It is Sylvie's brother who brought the musicians to our shores.

The first photo of the band was taken by Denny Gibson, my friend from Ohio, who was using superior photo equipment and had a better vantage point than I.  The rest of the sorry excuses for photos are by me and my little Canon. 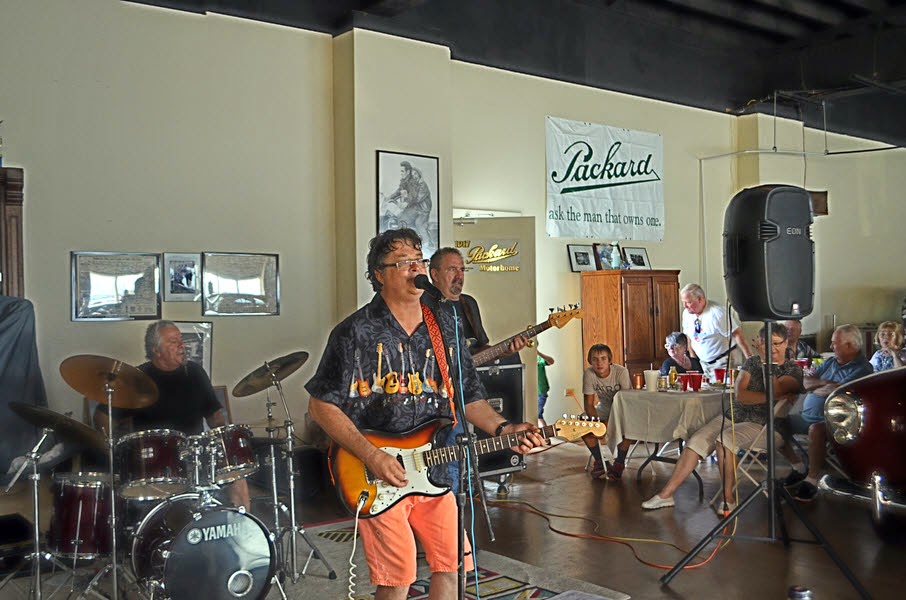 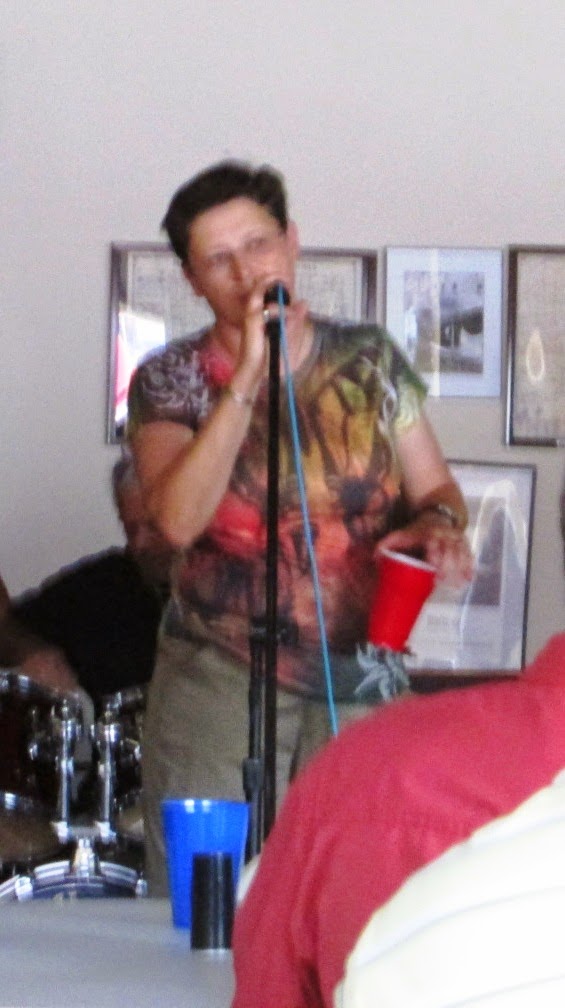 Sylvie, sister of the vocalist and guitarist, gave a heartfelt and emotional introduction in both English and French, to the band's appearance. 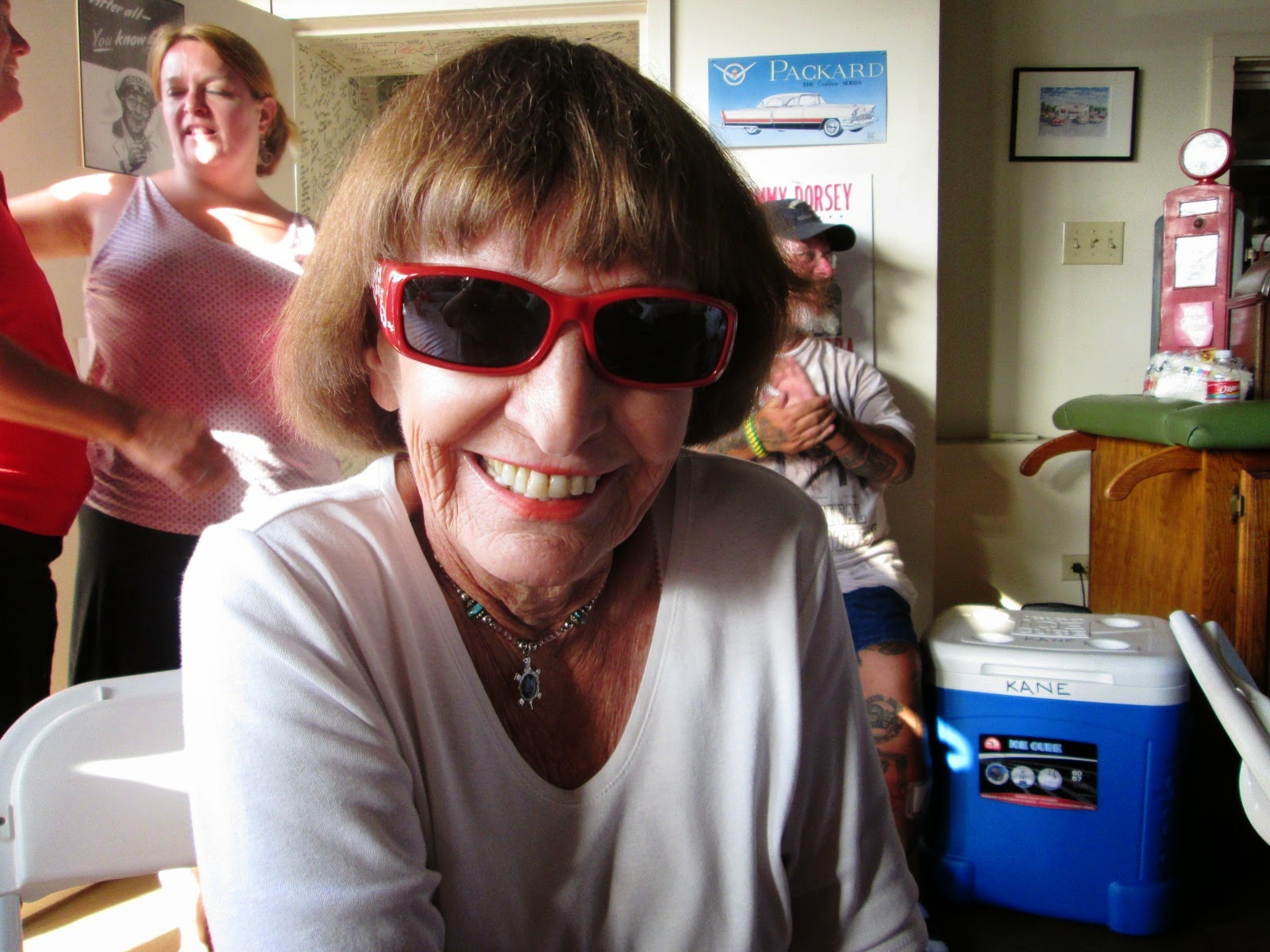 Jane Dippel, a Route 66 friend from St. Louis, was a surprise guest. 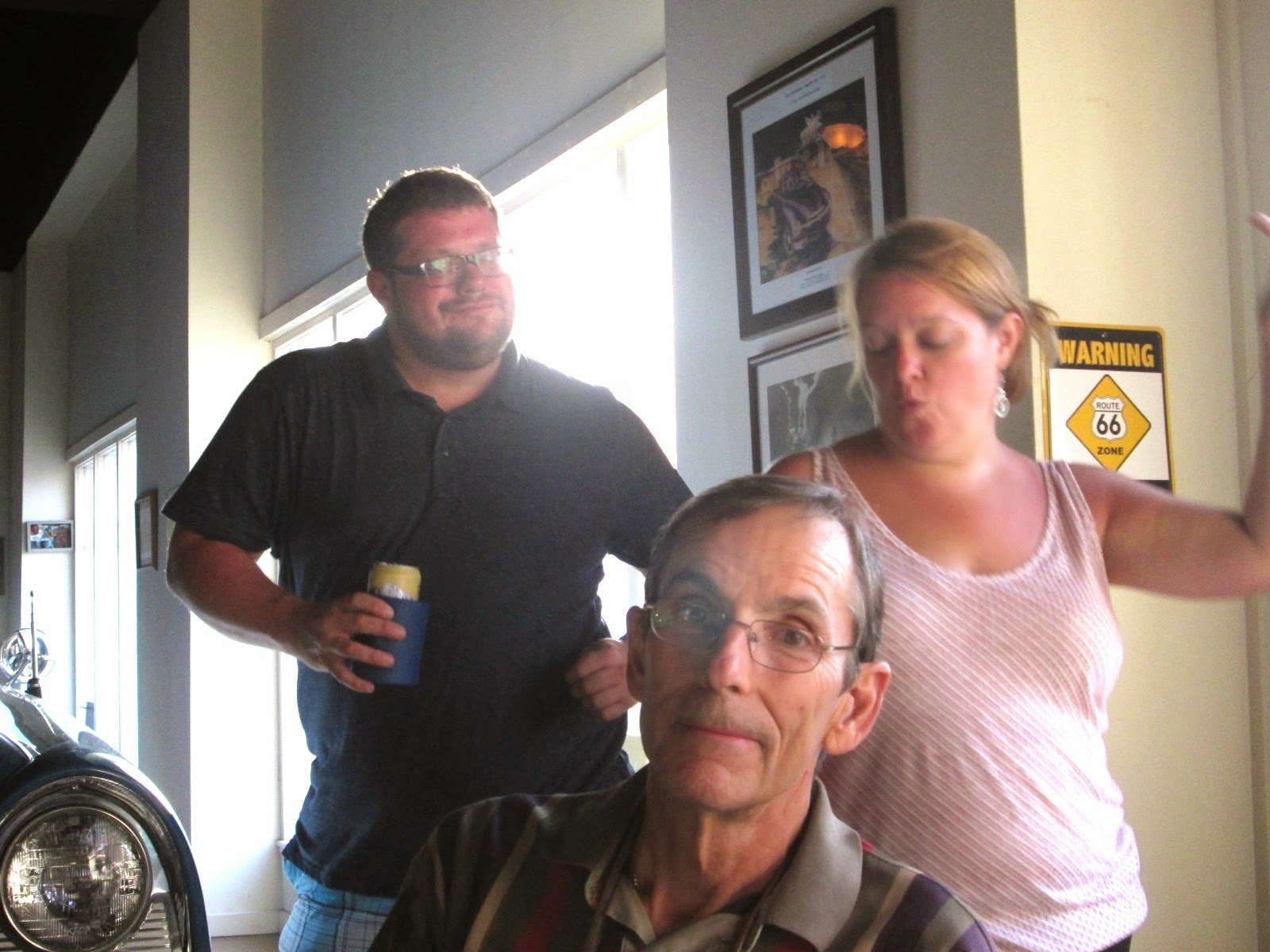 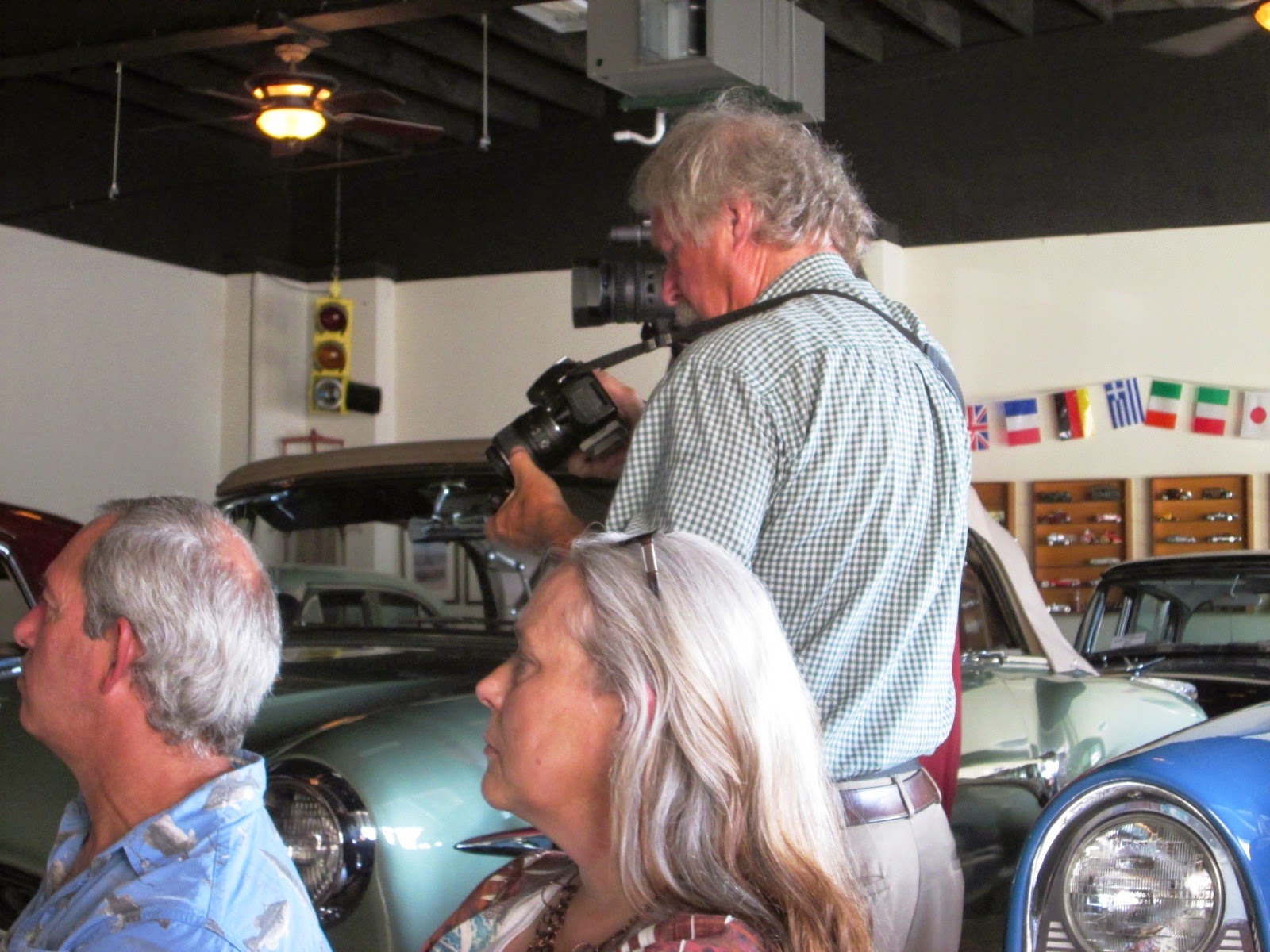 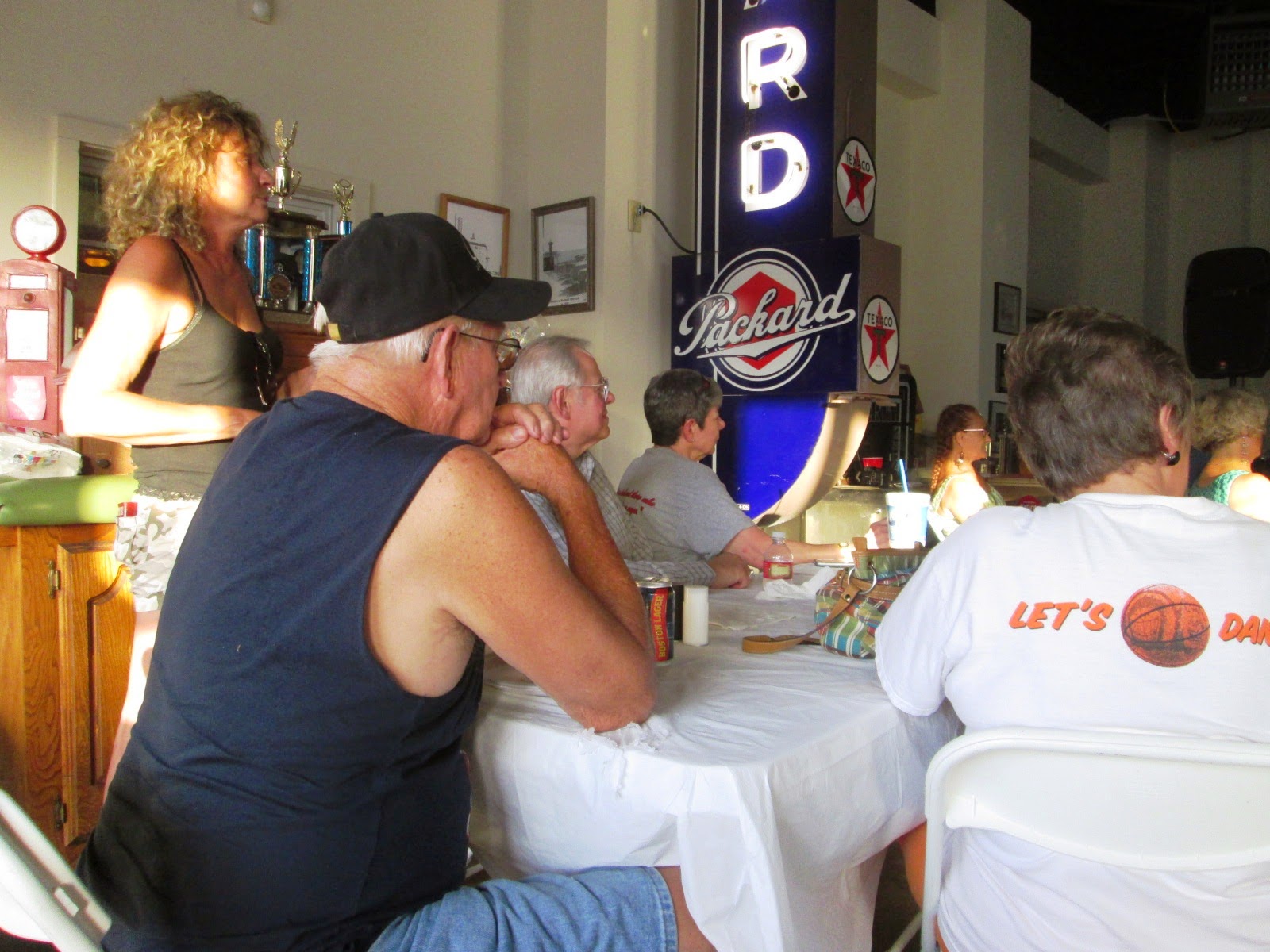 A table full of local Afton citizens listen intently to the rock and roll. 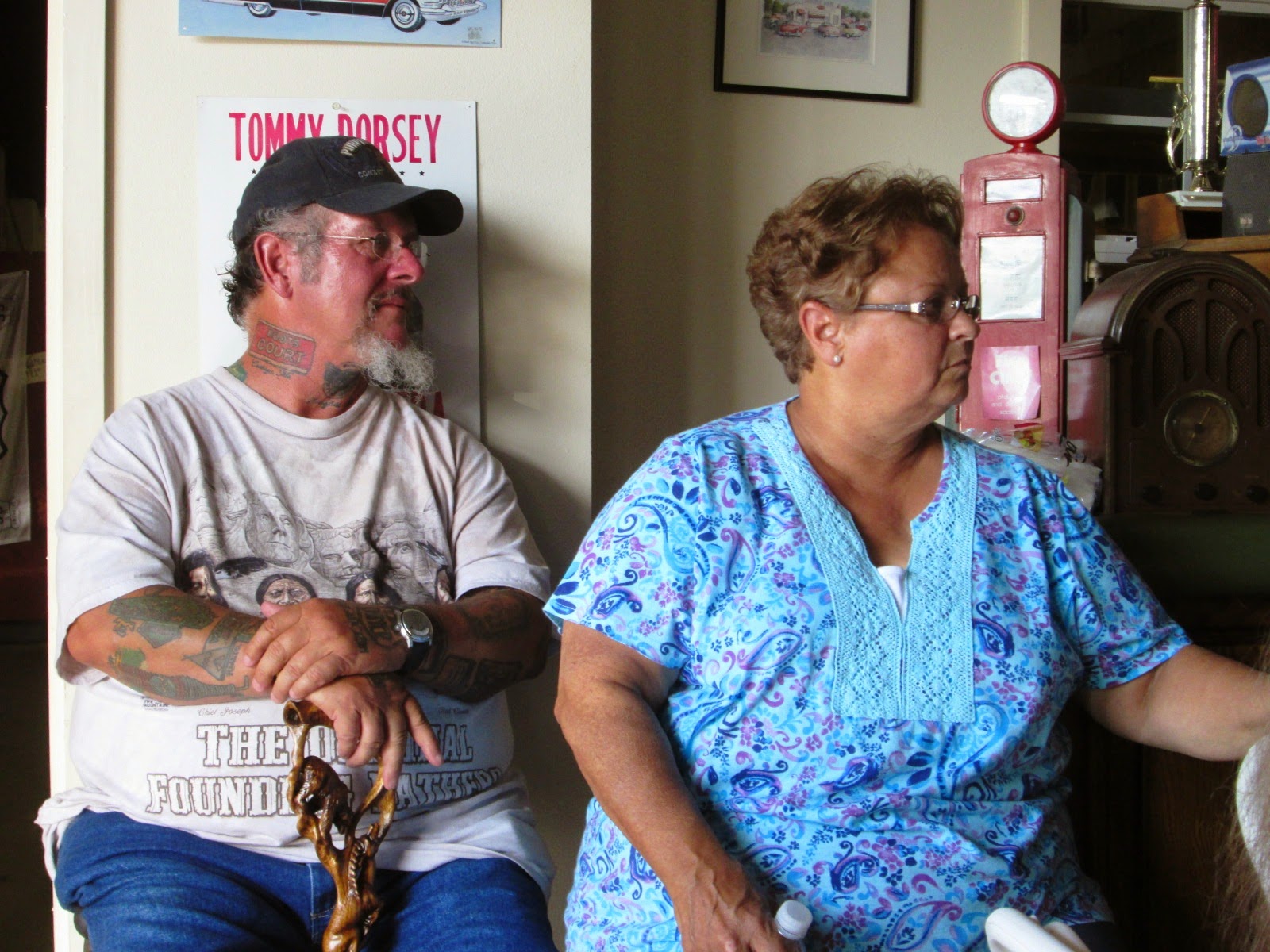 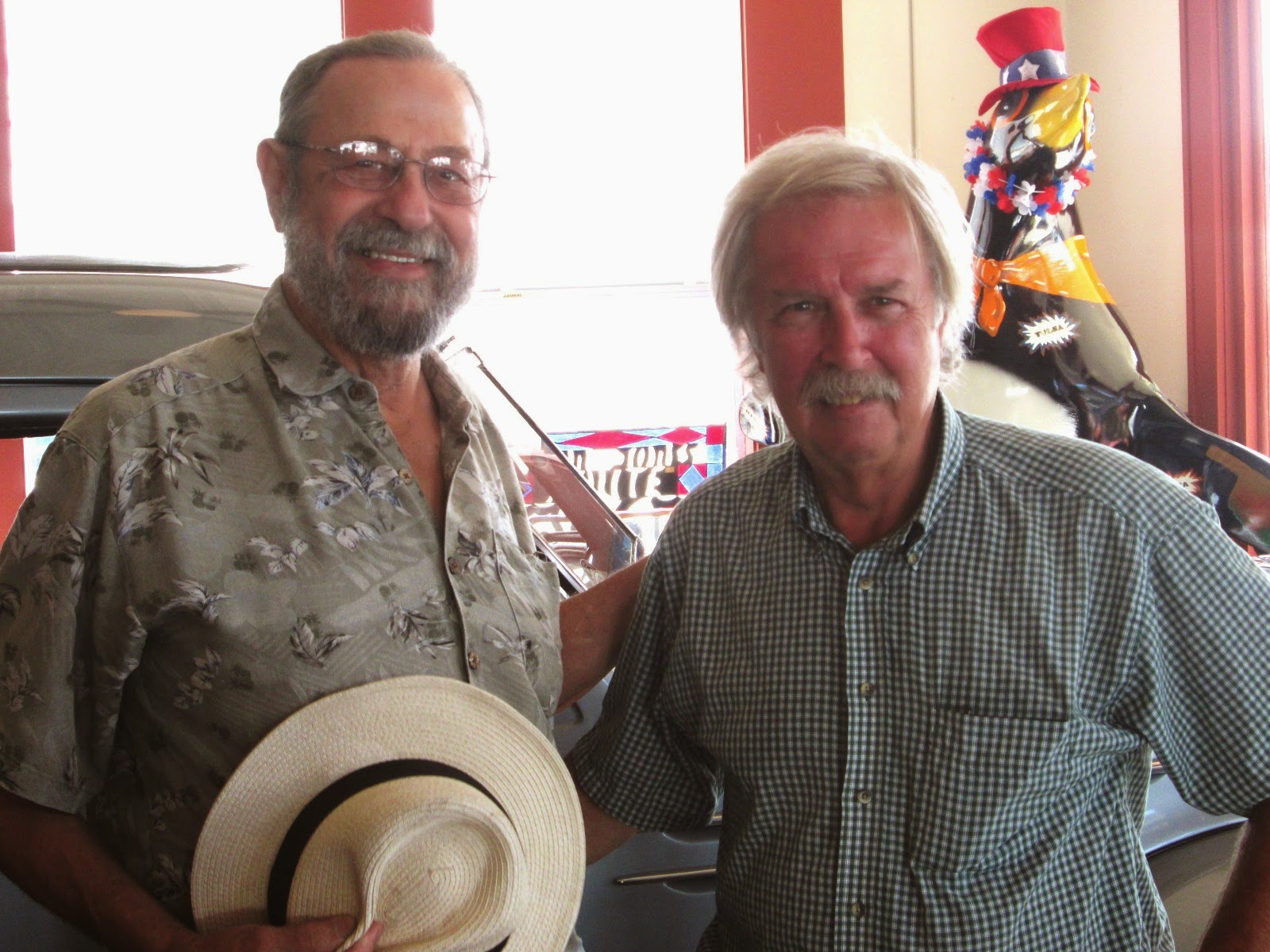 Denny (right) and his new friend Bill Schulter.  They met for the first time at the Station, but formerly had become acquainted via an auto buying transaction on Ebay last year.

My favorite videographer, PJ, came and generously agreed to record part of the concert gratis before he had to leave for a paid job. It can be viewed at YouTube here:  Afton Station Concert by Michel from France

We also had the usual group of drop-in visitors earlier in the day, and thought due to the excitement of the concert I failed to record all of them, I do know we had visitors from Niagara Falls, Ontario, Rogers Arkansas, and Spavinaw, OK
_________________________
Now for today.  When I arrived at the Station all vestiges of last night's party  were cleaned up and the Station was in great shape, thanks to many who stayed later than I did and pitched in to finish the job.  Today, our visitors came from Westerville OH, Ponca City OK, Ionia MI, Elmhurst IL, Afton OK, and Tulsa OK. 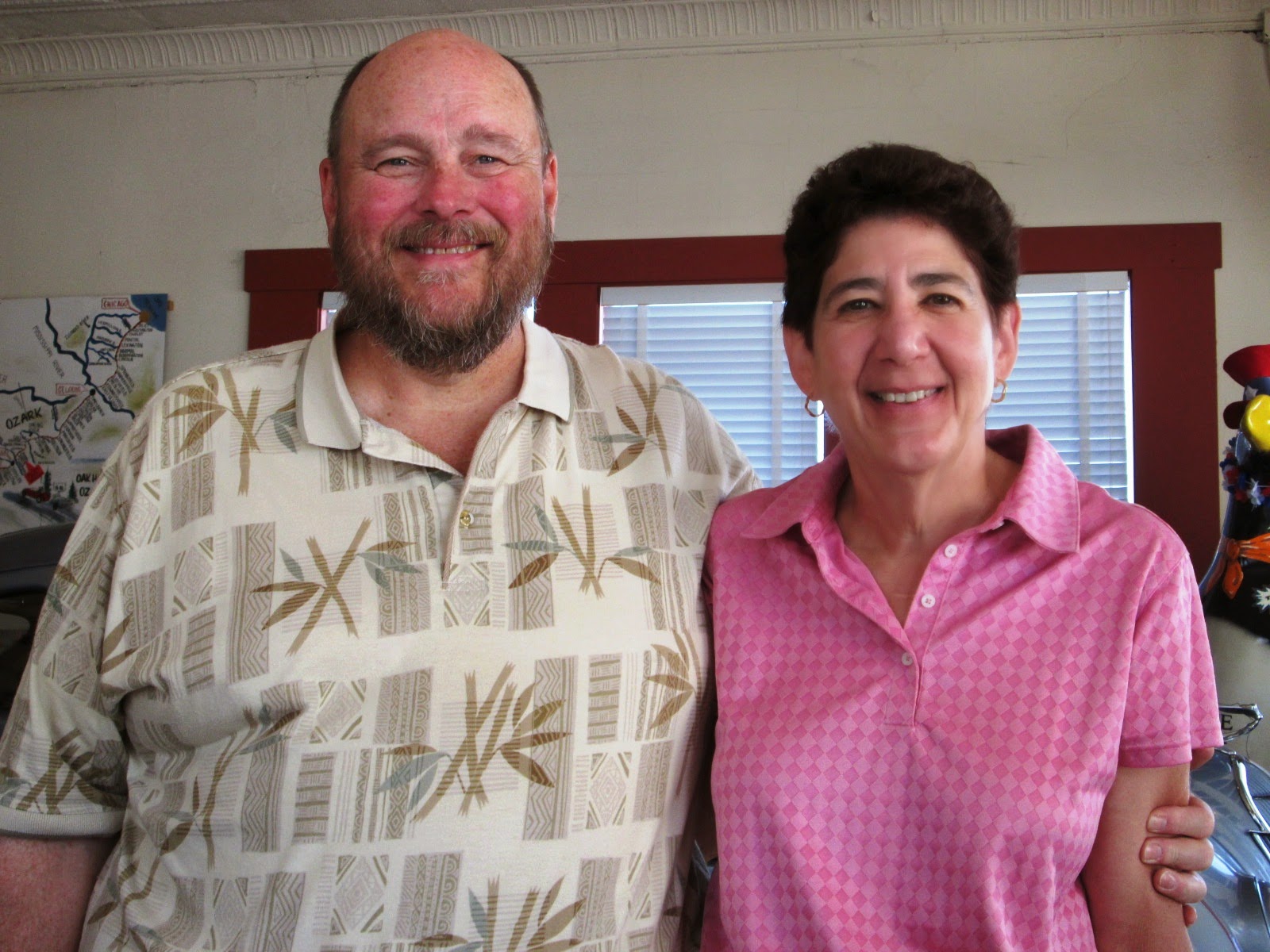 This congenial couple is from Westerville, OH, home of David Wickline, author of the wonderful Images Route 66 books.  According to the wife, her husband is the more avid Route 66 traveler, although it seemed to me that she was having a fine time too, considering the temperature outside was 102 when they came 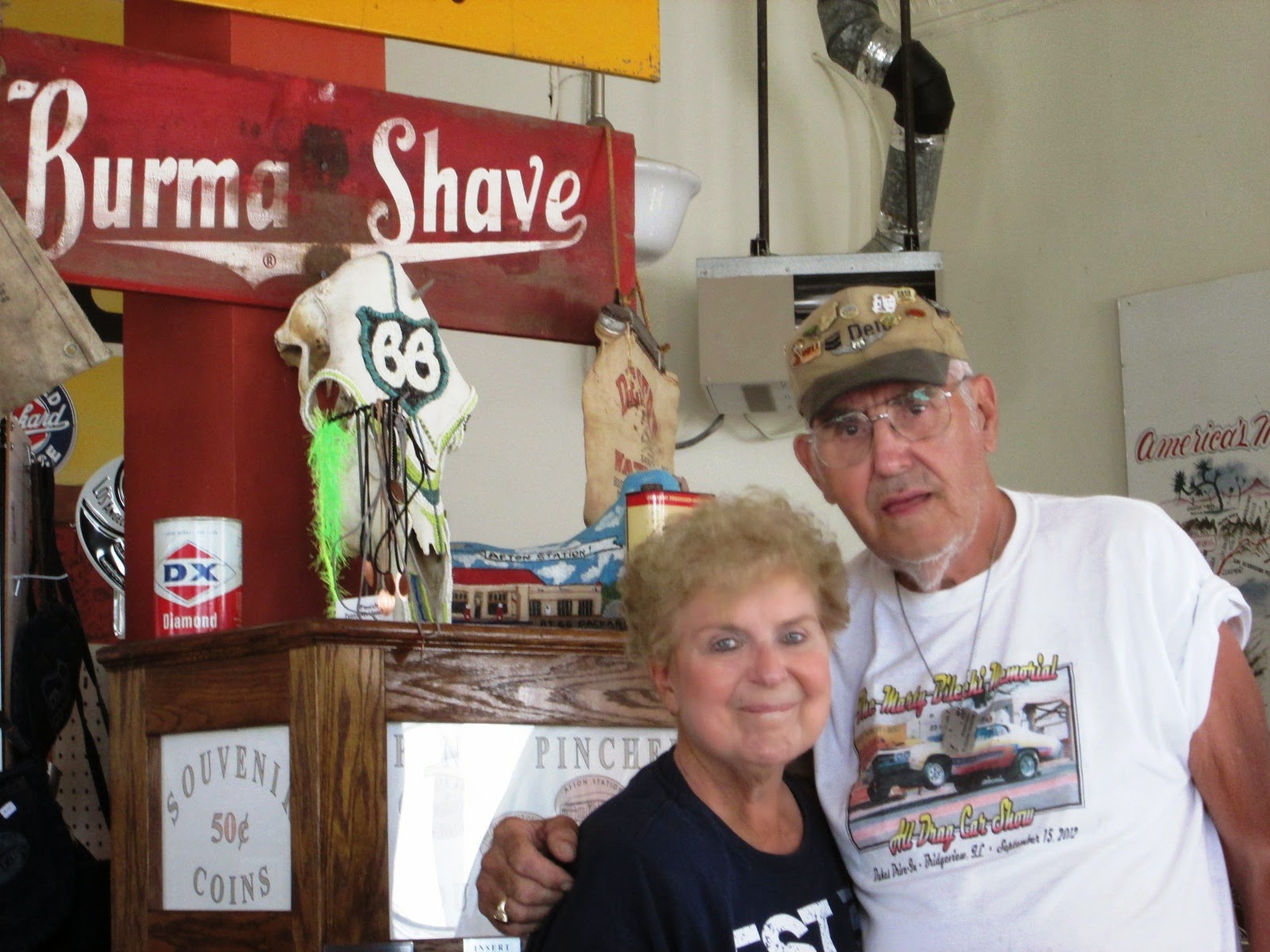 Here are Marty and Gerri Bilecki, iconic Route 66 travelers from Illinois who stop by every time they pass through Oklahoma, and that's quite often since they are constant travelers.  Descriptions of their many Route 66 explorations can often be found in various Route 66 periodicals.  It was nice to see them.

I was also joined today by Robin and Tattoo Man.  Although the day was busy, it was just quiet enough to make it a nice contrast with the chaos of yesterday.  Of course I'll be back in Afton tomorrow to greet visitors and "tourist season" begins to wind down.