You learn something new every day.   Today, Ron M. and I learned the meaning of "mollydooker" when a group of Aussie men came to visit Afton Station and one of them, while signing the Guest Book, described himself as such.   "Huh?", I said stupidly.   "A lefty... a left handed person", he replied.  Oh, really!  On the way home, Ron and I used my phone to inquire of Siri exactly how it's spelled and a precise definition (just in case he was pulling our leg and it really meant something nasty... ha ha).  Well, now we know what to call all those poor souls who struggle with my Guest Book with three rings on the "wrong" side for mollydookers! 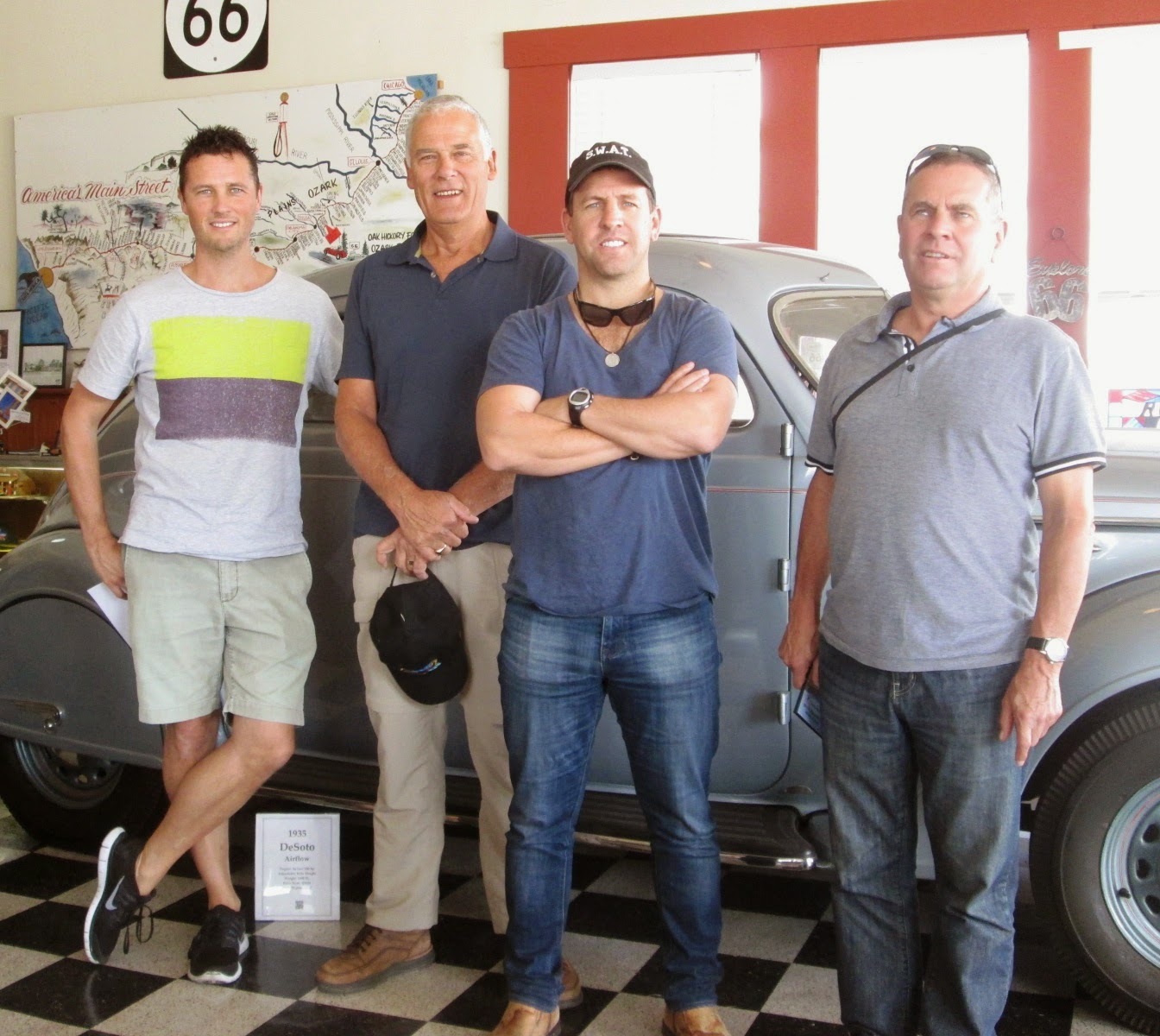 Here are those selfsame gentlemen from Melbourne, Australia.   The one with crossed arms is the mollydooker.  They are two fathers and two sons and, incidentally, all very, very handsome!  They're doing a full Route 66 trip. 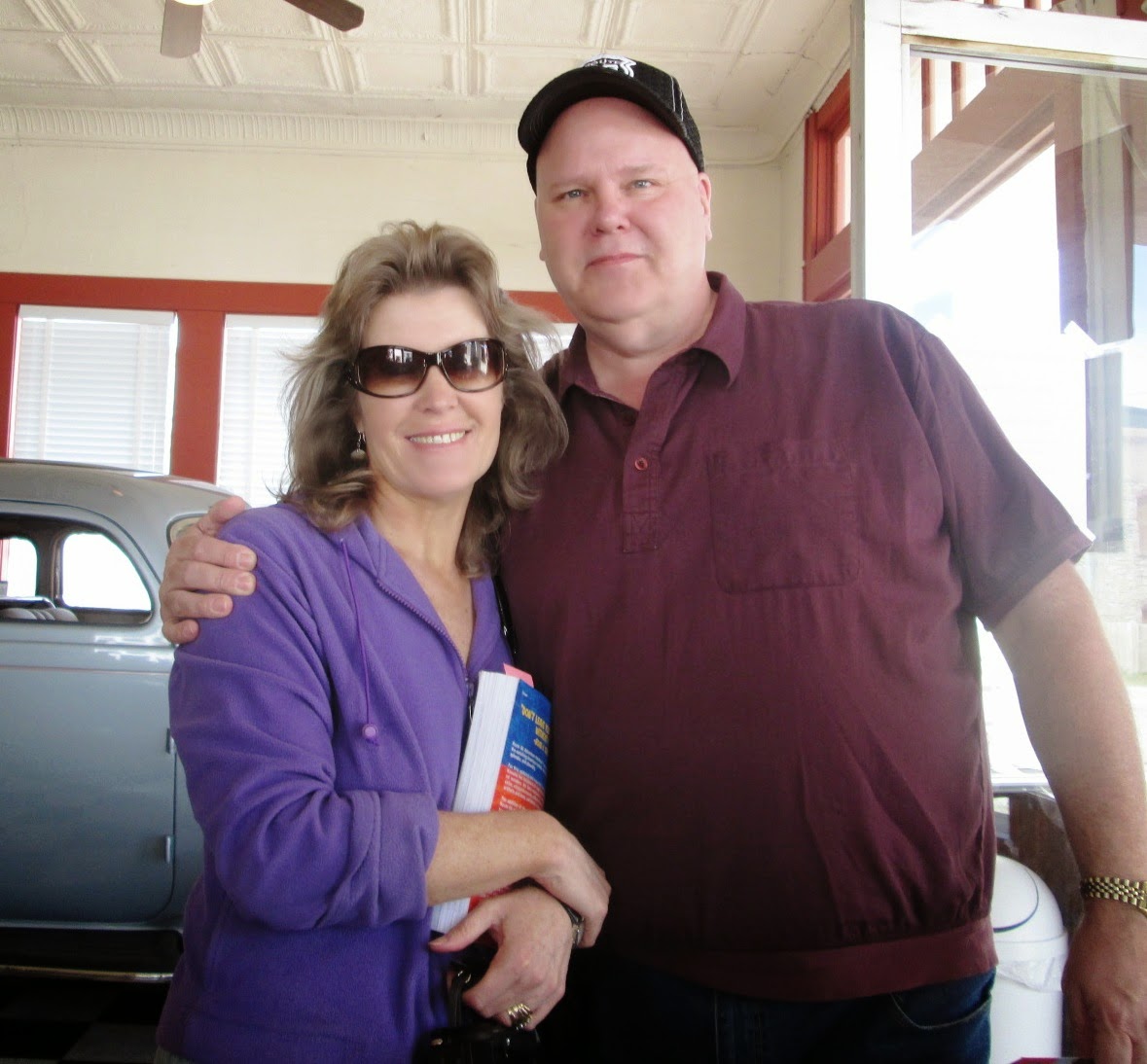 Here's a couple from Vancouver, British Columbia, also doing the full Route, well armed with guidebooks and having done prior homework.  We had lots of time to chat with them about what and who they'd seen thus far and who and what they should see as they move west. 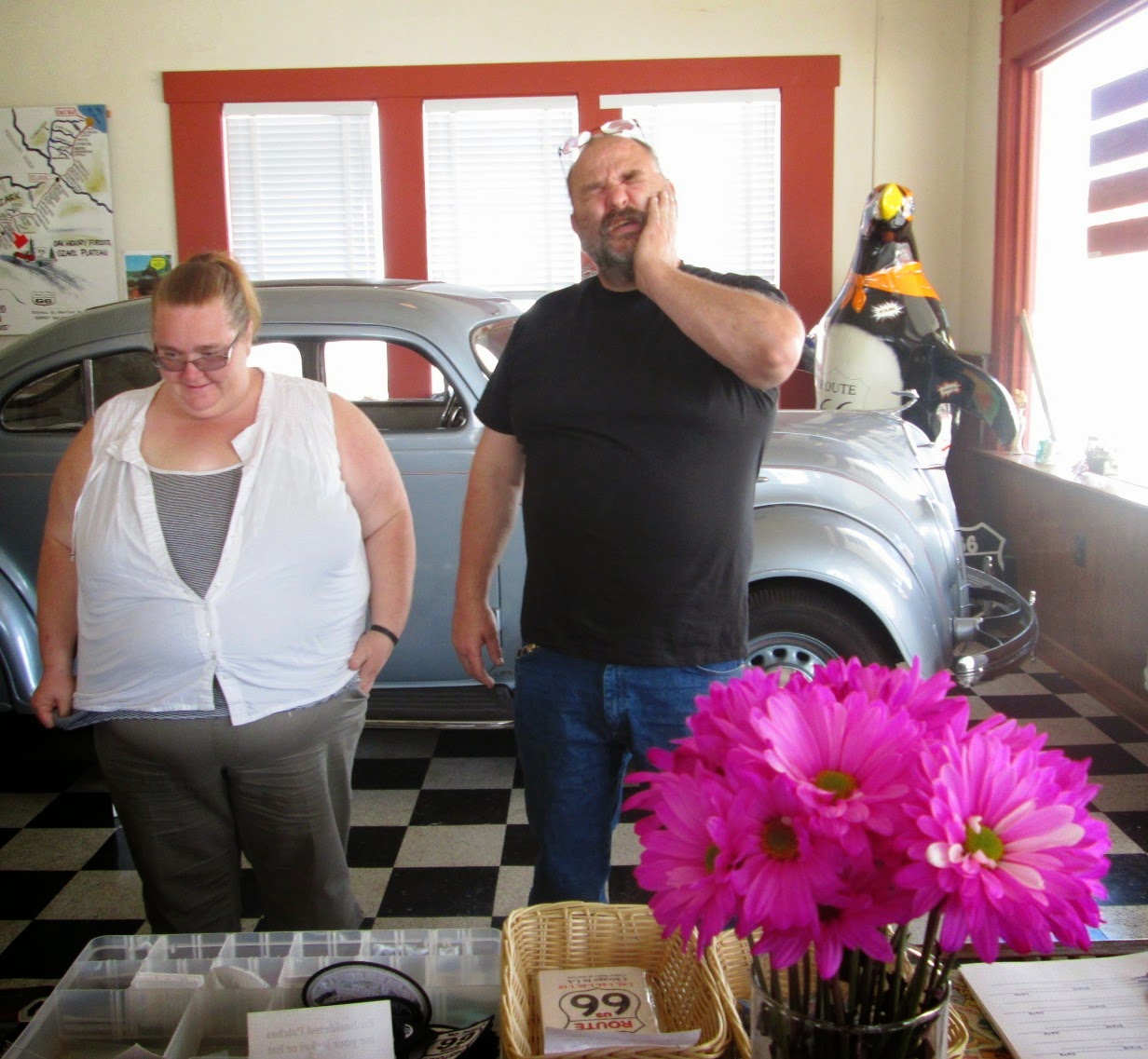 The gentleman in this photo is a blacksmith!  I'm pretty sure  he's our first visiting blacksmith, and he used to work as such in a historic reenactment venue near Wichita, KS.  Now, they are residing in Eucha, Oklahoma.

At the very end of the day we heard the roar of motorcycles and what should appear but 14 bikes carrying 14 women from Tulsa.  They stopped primarily to have their Route 66 passports stamped, but those who hadn't visited previously also lingered long enough to check out the cars in the showrooms and buy a few items. 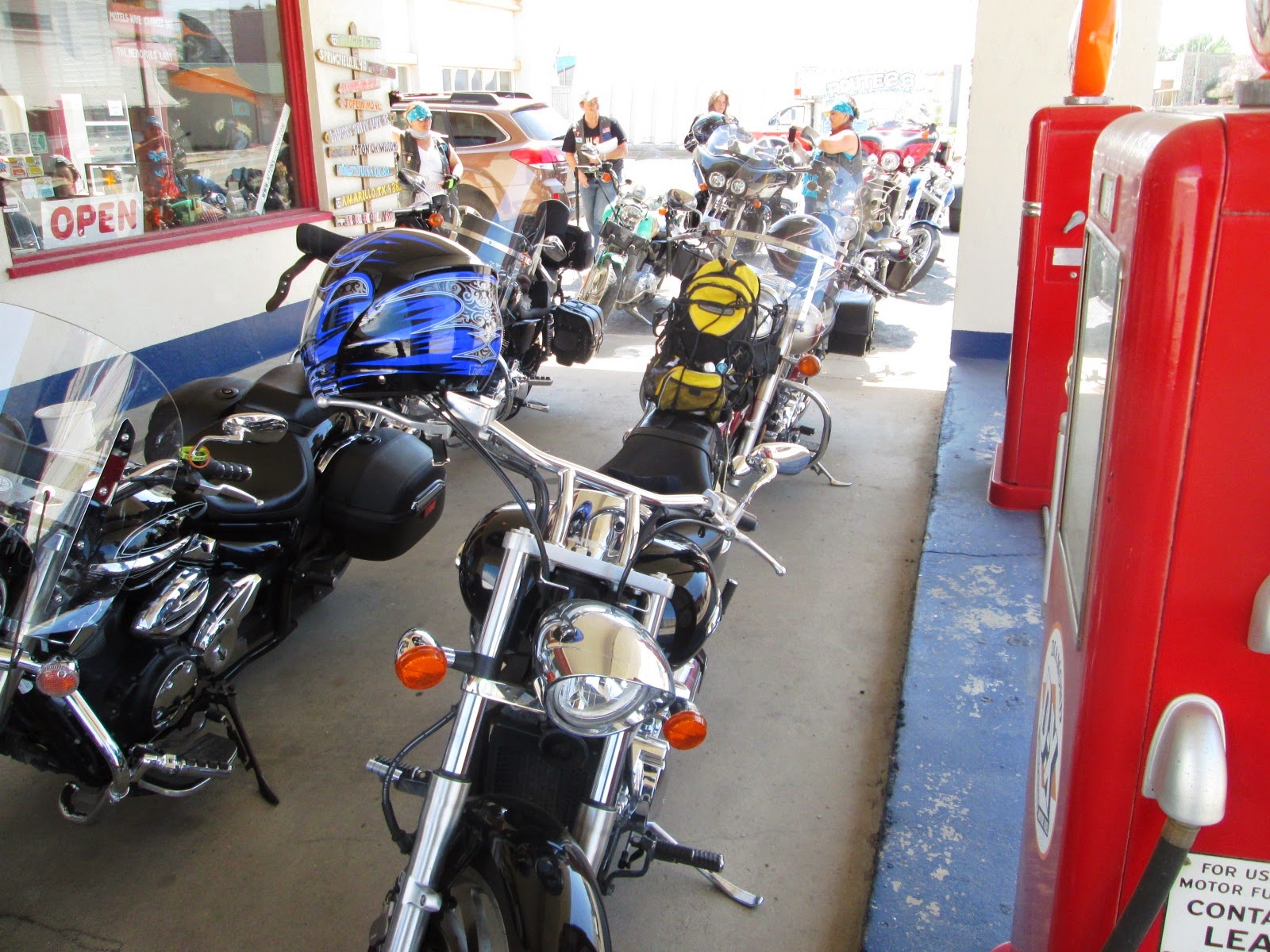 The remainder of our 27 guests came from Adair, OK, and Denton, TX.

Another star of the day was this amazing, gorgeous, and supremely tasty blackberry pie made by a neighbor of Ron's and enjoyed by Ron, me, and Tattoo Man, who was with us for part of the day.  I must say, that woman has a way with pies!  Flaky crust, yummy berry filling, sugar crystals atop.   I was in heaven! 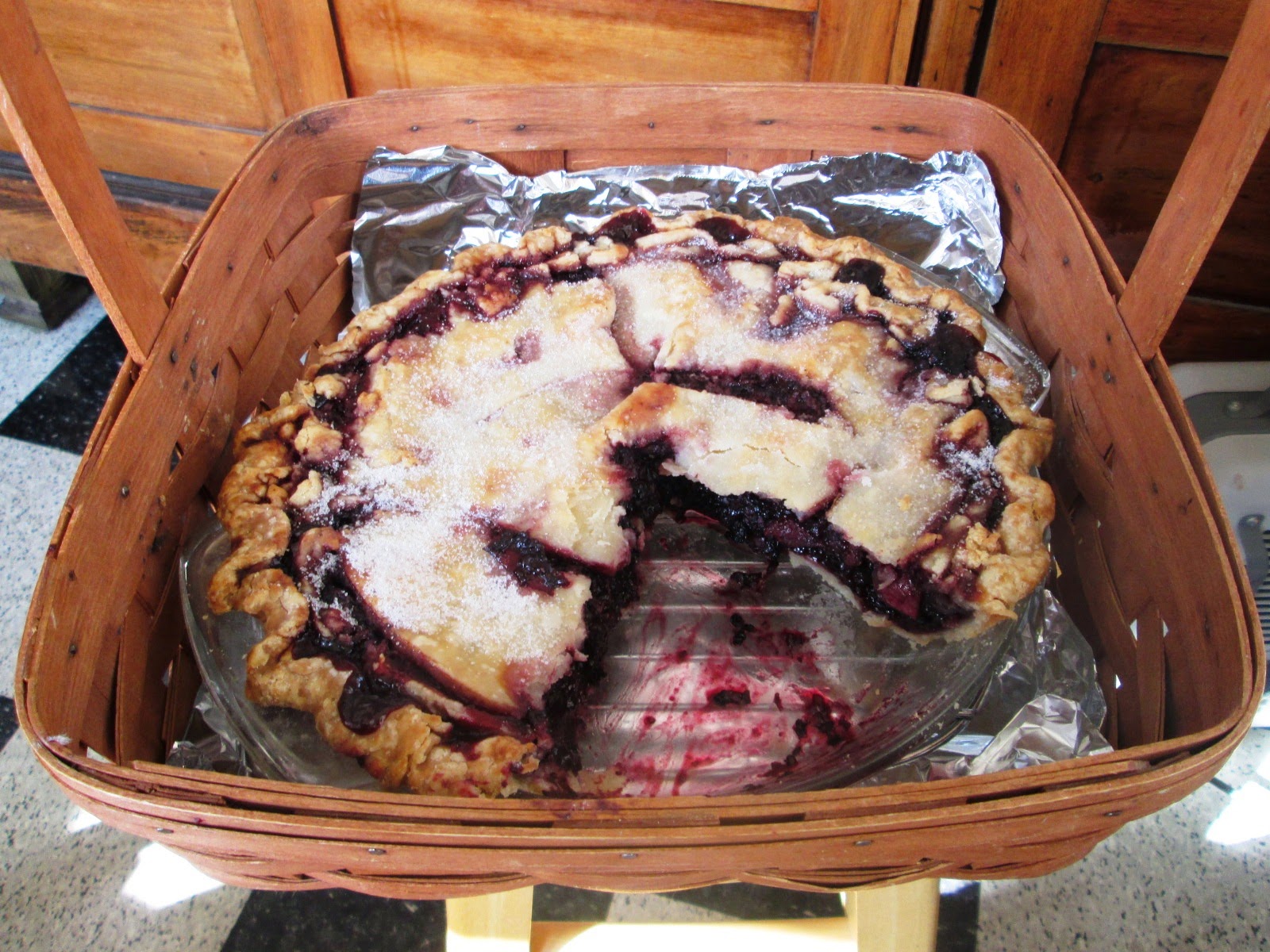