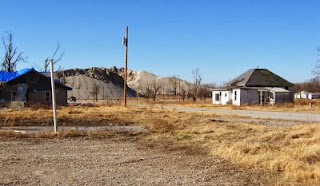 That is the title of an Editorial in Sunday's Tulsa World newspaper.  It made me sad.   I found out that I missed what I feel is an important date in the life of Route 66.   On November 26th, the Route 66 town of Picher, OK ceased to exist as an incorporated municipality.

I have had a very emotional interest in Picher, as well as its sister town Cardin, ever since I moved to Oklahoma and learned that the two towns had been named the biggest (read worst) Superfund sites in the U.S.  The lead and zinc mining that had brought amazing prosperity to the towns in the '30s and '40s eventually dangerously polluted the land, water, and air in the region.   Afton is in the same county and, although not affected as greatly as the other two towns, still has a somewhat dangerous level of pollutants in its air, so I have a personal interest in the whole sad story.  But mostly, I feel so badly for the citizens of Picher and Cardin who were forced to move from their longtime homes.

You can read about the closing of the towns here: http://www.tulsaworld.com/opinion/editorials/editorial-picher-cardin-officially-are-no-more/article_dcfcbb72-40ee-5359-9cc8-7e82ec0b642b.html 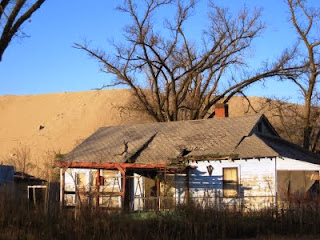 That IS sad. I remember very well your writing about Picher.

Beth - Picher's story has always fascinated me, and it stems from a dream I had many years ago, even before I ever knew I'd be moving to Oklahoma or ever had waking thoughts about the town. I think I must have lived there in a previous life! :-)

Isn't one of the members of the country group Rascal Flatts fro Picher?

Yes, Trevor, Joe Don Rooney was born in Baxter Springs, Kansas but raised in Picher. He is the lead guitarist for Rascal Flatts.

Thanks for answering Trevor, Ron. I thought that was true, but didn't know any of the details.