Ron M. and I took a little jaunt today, away from Route 66.   The main destination was a visit to Ron's cousin in Stillwater, home of Oklahoma State University and the world-famous Eskimo Joe's, but first we stopped briefly in Perkins, OK to look for an old DX gas station which a recent visitor to Afton Station was helping to restore. 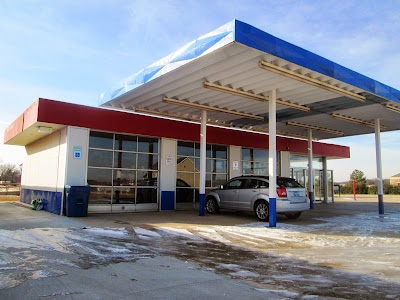 We weren't entirely sure we'd found the right place, but when I got home I checked the blog post for the day that fellow visited us, and it confirmed that it was indeed the very same really neat '50 style station he'd told us about.  More about the station is available at the Cimarron Starlite Cruisers website at:
http://slauener.tripod.com.  Unfortunately, the building wasn't open, however we were able to drive around the rest of what appears to be the local historical society's "campus" consisting of a number of restored or reproduced buildings from the town's history. 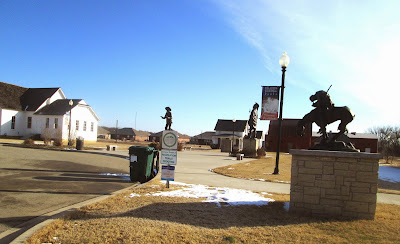 This church is an example of one of the beautiful restorations. 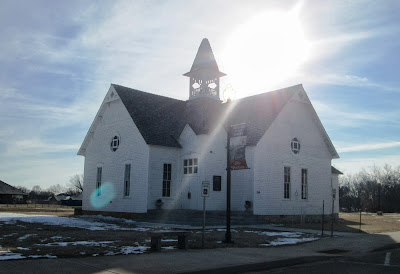 After visiting Cousin Mary for a while, we headed out to find somewhere to eat lunch.  That was accomplished easily when we found a spot specializing in steak and a big salad bar.   Once over-filled, we headed toward home, a trek which took us through several small towns, one of them being Yale, birthplace of Jim Thorpe, world famous athlete known for his feats of athleticism in the 1912 Olympics as well as being a standout in professional football, basketball, and baseball.  There's more to the story than that, so check out Jim Thorpe's bio in Wikipedia.  It's interesting.  Here's the modest home of his birth in Yale. 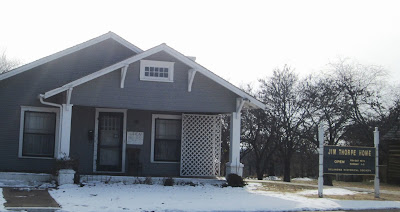 It was nice getting away for a while today.  On Saturday I should get back to Afton Station - finally - so I'll be there to report on my first trip back in 10 days!  Robin will open tomorrow and the rest of us will be there for the weekend.  Meanwhile, here's a shot of my house in the semi-darkness with my meager (but very tasteful, I think   LOL) Christmas decoration. 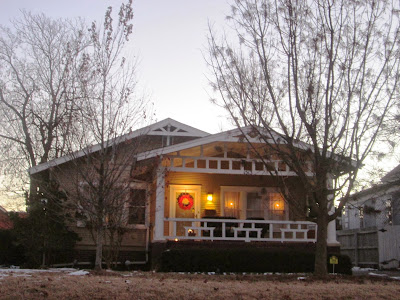 Perkins was the home of Marshal Frank Eaton, who was the model for Pistol Pete, Oklahoma State University's mascot.

I didn't know that, Trevor, but it's a very interesting piece of trivia. The town of Perkins seems to be very aware of and interested in its history. I like that!

Yale is also the birthplace of jazz great Chet Baker. I haven't been through Yale in quite a few years; I don't know if they publicly acknowledge that.