A Citroen Racer, a DX Station Owner, and A Fun Coincidence

No boredom today, with 18 fine guests who came in to Afton Station in a lovely, random way which allowed us to chat with each and every one of them. 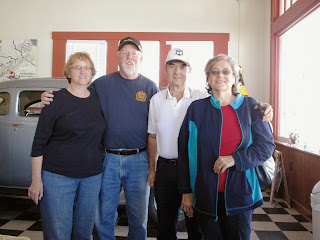 A coincidence occurred when a couple from Michigan arrived about three minutes after another Michigan couple had entered the Station.  And. . . they lived 5 miles from each other!   Here's a photo of them after they learned of the proximity of their homes.  Fun! One couple is doing Route 66 east to west and the other heading west to east. 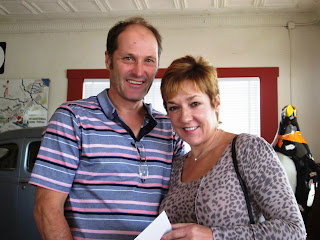 This gentleman from England, on honeymoon with his beautiful new wife, revealed that he is a champion Citroen racer, and in fact won the U.K. 24-hour Citroen road race a couple of  years ago.  Who would have thought that those little cars would participate in such grueling competition?  This fellow has even raced internationally!  Obviously, he was surprised and delighted by our ownership of one of the rare Citroens in America.

Meanwhile, the folks from Perkins, OK are members of the Cimarron Starlite Cruisers and have recently acquired a DX gas station from 1960 which they are in the process of restoring and equipping with lots of DX memorabilia.  He was obviously interested in our D-X station.  (Note the difference between D-X and DX.   Our station is older, when the logo still  had the dash between the D and the X.  Later, the dash was removed.)  Here are some photos from their website, http://slauener.tripod.com. 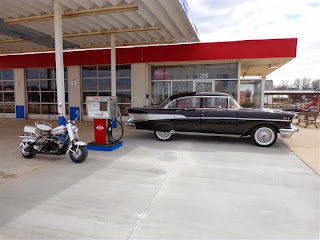 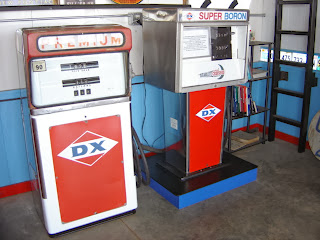 A second visit from a man and his wife from Checotah, OK allowed us to talk about his very, VERY extensive collection of old signage, along with other collections including gas pumps, cars, and toys.  What an interesting fellow, and a collection to die for!

Marly and Robin worked out back today on a fence project for David.  It was cold outside, but they worked tirelessly all day and will do so most of next week as well. 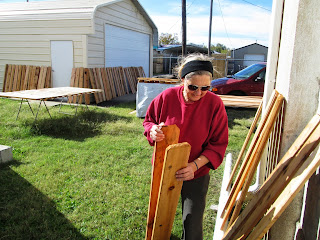 Our autograph wall is growing more and more popular and BIGGER!  Here are a few random signatures from recent visitors. 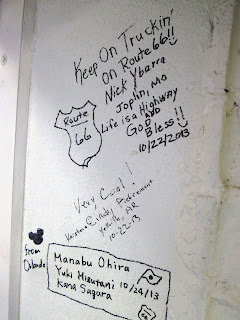