On a background of  TV reports about an extremely severe tornado-filled storm working its way up Route 66 through many Route 66 towns such as Edmond, Luther, Arcadia and Chandler, I'll try to get through this blog before it gets close to Tulsa.  I have to admit, I'm frightened when this happens.  Thus, another short, sweet posting here.  Excuse any typos as a result of my nervous fingers.

We started the day with four Australian bikers who were in a hurry to make it to their next stop.  Soon after that, the anticipated group of 16 from the Valley Antique Car Club of Russellville, Arkansas arrived on the last day of their weekend cruise.  They've visited before, and they're always an interesting group. 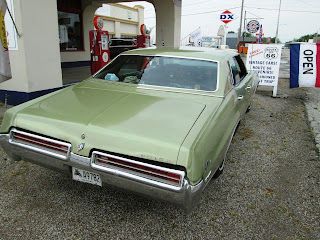 The owner of this car is a huge fan of Packards!   He just didn't drive one of his today. 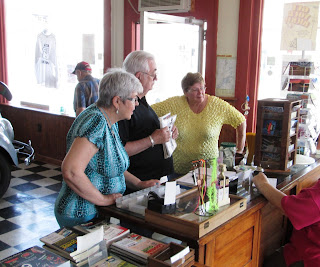 A very nice lady named Evelyn arranged this tour, and I had a great chat with her while others were drooling over the cars in the showrooms.. 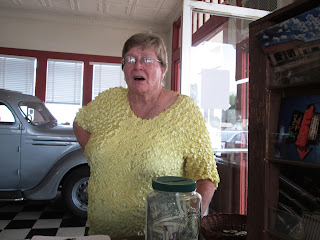 Two trailers arrived at once, this little teardrop (with the motto on the back "I Go Where I'm Towed To"), from Salem, Indiana. . . 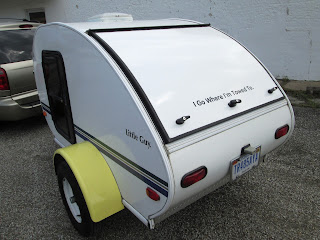 . . . and this congenial couple from Collinsville, Oklahoma with their much larger RV, coming back from a weekend on the lake. 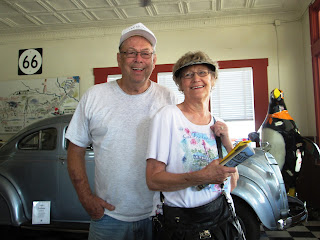 The three folks on the left are visiting from Beijing, China.  The man on the right is from Cedarburg, Wisconsin.  Since they all arrived at approximately the same time, I photographed them together, not realizing that the Wisconsin gentleman had a wife in the car who simply didn't come in in time for the photo.  The Chinese contingent is traversing all of Route 66 and taking huge numbers of photos.  Many of those photos were taken in and around Afton Station.  The Wisconsin fellow and his wife are also planning to end their road trip in Santa Monica.   Yayyy for all of them! 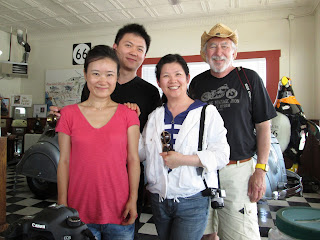 Now, please excuse me while I continue to keep an eye on the TV screen, which will eventually tell me if I have to go to my basement with a mattress over my head.  I love Oklahoma, but not this part. . .
Posted by Laurel at 5:33 PM

I hope you & Afton Station are all right. Saw some storm coverage earlier this afternoon—we get them here as well, and they're frightening indeed!

All clear here, for now. Thanks for asking, Jen!

Would you believe I didn't? I complely forgot while they were there, then wanted to kick my butt when I remembered about 15 minutes later!