I'm pleased to announce another wonderful, busy day at the Station!  There were folks waiting at the door when we got there, and folks who left when we left.   Busy, busy, busy all day with 39 visitors.  It was so great to have Phil back from California.  He was gone for three months and we missed him.  He spent a little time with us today but later went home to rest from his long drive.  Ron M. was with me as usual, and Robin stopped by, too.

Visitors who were at the door when Ron and I arrived were four guys on bicycles who call themselves ROMEO -- Retired Old Men Eating Out.   Since they're pedaling across the country, one really could not think of these ripped and athletic guys as "old".  One of them was on a recumbent bike. 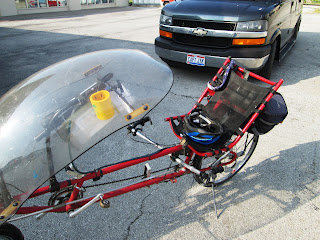 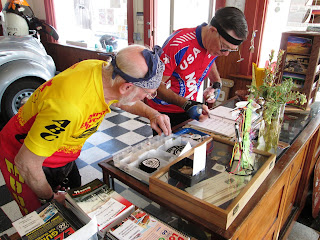 A couple from Queensland, Australia also came early.  Here is the wife signing the guest book as I yap, yap, yap as usual. 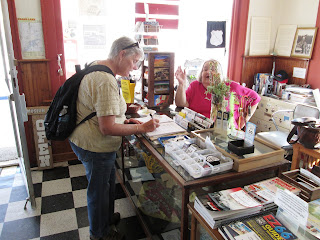 Two couples, one from Discovery Bay, CA and one from Eagle Point OR were next.  Here's the fellow from Cali finding a spot to sign the door as his wife stood by.   We were actually surprised that he found a small space, but he persisted and found a tiny bit at the bottom.  We admired his perseverance! 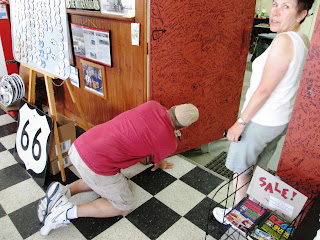 Another California/Oregon duo arrived a bit later -- two old college friends traveling together.  On the left, Bill from Eugene OR, and on the right Jim from Pleasanton CA.  We really enjoyed their visit. . . 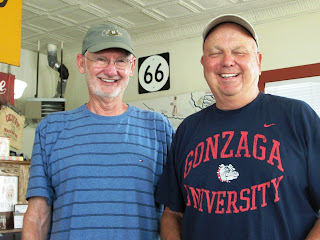 . . . and they certainly enjoyed the cars, particularly the DeSoto. 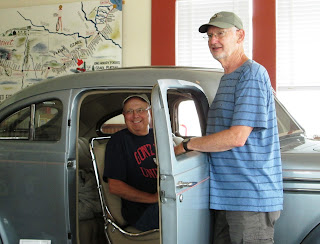 A group from the Central Oklahoma Corvette Club is on an exploratory cruise of the Grand Lake area and we are honored to be one of their stops, for the 2nd year in a row.   Here I am giving them a little welcome talk before letting them loose in the auto showrooms. 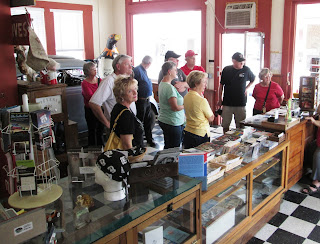 It's always nice to a have the parking lot filled with beautiful 'Vettes! 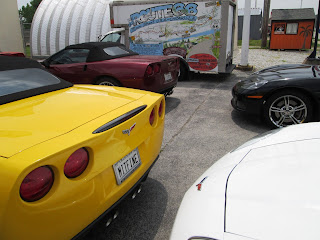 Another very interesting and pleasant lady came and stayed for a good bit of the afternoon.  She's from Speculator, NY  and is in the area speculating on buying a home here to be closer to her kids who are in Springfield, MO and Stillwater, OK.   I hope she makes the decision to move here, because she'd make a good neighbor! 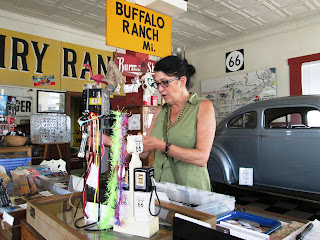 Other visitors came from Seminole OK, Wichita KS, Baxter Springs KS, and Ketchum, OK.   Tomorrow we are anticipating bad, or even severe, weather, so it will be interesting to see how the day goes.  We do plan to go to Afton, but not sure if we'll be able to stay.  Tune in ....
Posted by Laurel at 5:56 PM