As I once again try to acclimate myself to my hectic summer schedule, I'm finding that all vestiges of creativity I may have once had are quickly giving way to a life of rushing around just to get everything done in a day.   I'll settle into a routine soon, but until then, I have completely run out of clever (or even not-so-clever) daily titles for my blog posts.  Therefore, I challenge you, my readers, to submitting a title for this one.   Winner will be announced on Tuesday.

Ron M. was with me today and the morning was very quiet, to say the least.  That translates to NO visitors (except for David and his son Patrick who stopped in to do some business with me).  But actual travelers were nowhere to be seen until noon.   After that, we went on to have 8 visitors, so it was a pretty good day after all.

This gentleman from Taylorsville, KY is showing us his Kodak PlayFull, which is the smallest video camera I've ever seen.  He said it works well for him on his road trips. 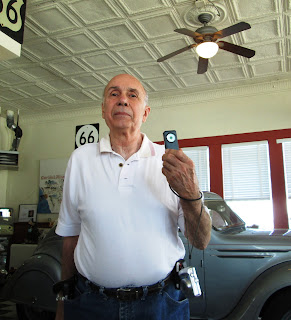 A family from Dallas, TX stopped by, and their very cute little 17-month-old son was fascinated by the penny pinching machine.  Well, actually, he was fascinated by the handle of the machine, which caused me to worry that he was going to bonk his head with it, as several other short people  have done.  He survived, however, and we enjoyed meeting and greeting his mommy and daddy. 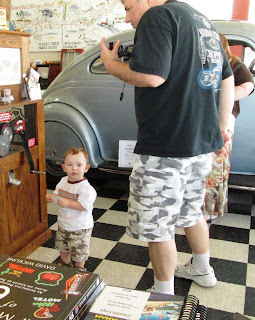 Here's a visitor from  Maud, OK, caught in the act of actually buying something!  Sales have been low so far this season, but I keep telling myself that April never has been one of the best months, and there's still more than half of it left. 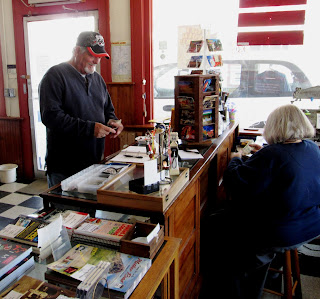 The two fellows on the left are from Normandy, France and are having a spectacularly fun time on their Route 66 trip.   They are members of the Normandy U.S. Cars Club, so they derived great joy at examining our collection.   Alain and Gerard left a souvenir of their club with me, which I'll show below.  The gentleman on the right came in at the same time and is from Aberdeen, Washington.   Since they were all going in the same direction after leaving Afton Station (namely, to Darryl Starbird's museum), they bonded a bit before they left.   The gentleman from Aberdeen says he may be the world's champion visitor to car museums, as he can count more than 100 which he has toured.  Wow! 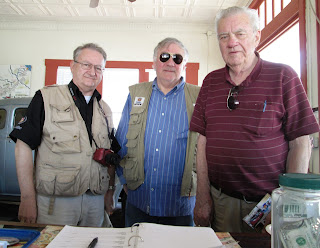 Here is the card which the French men gave to me.   The '59 Cadillac belongs to Alain.  Look at all nice American cars at their car show! 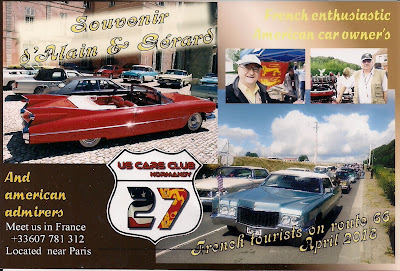 The Lull before the Summer Storm...

Ken's title is no doubt accurate. Mine's a bit poetic--All in an April Afternoon--referring to Lewis Carroll's poem in Alice in Wonderland that includes these lines which make me think of cruising Route 66 on a beautiful sunny afternoon:

"All in the golden afternoon
Full leisurely we glide; . . .

I can't decide. I guess I'll just call it "An April Afternoon Lull Before the Storm Gibberish". Hmm... a bit long, but it works! :-)